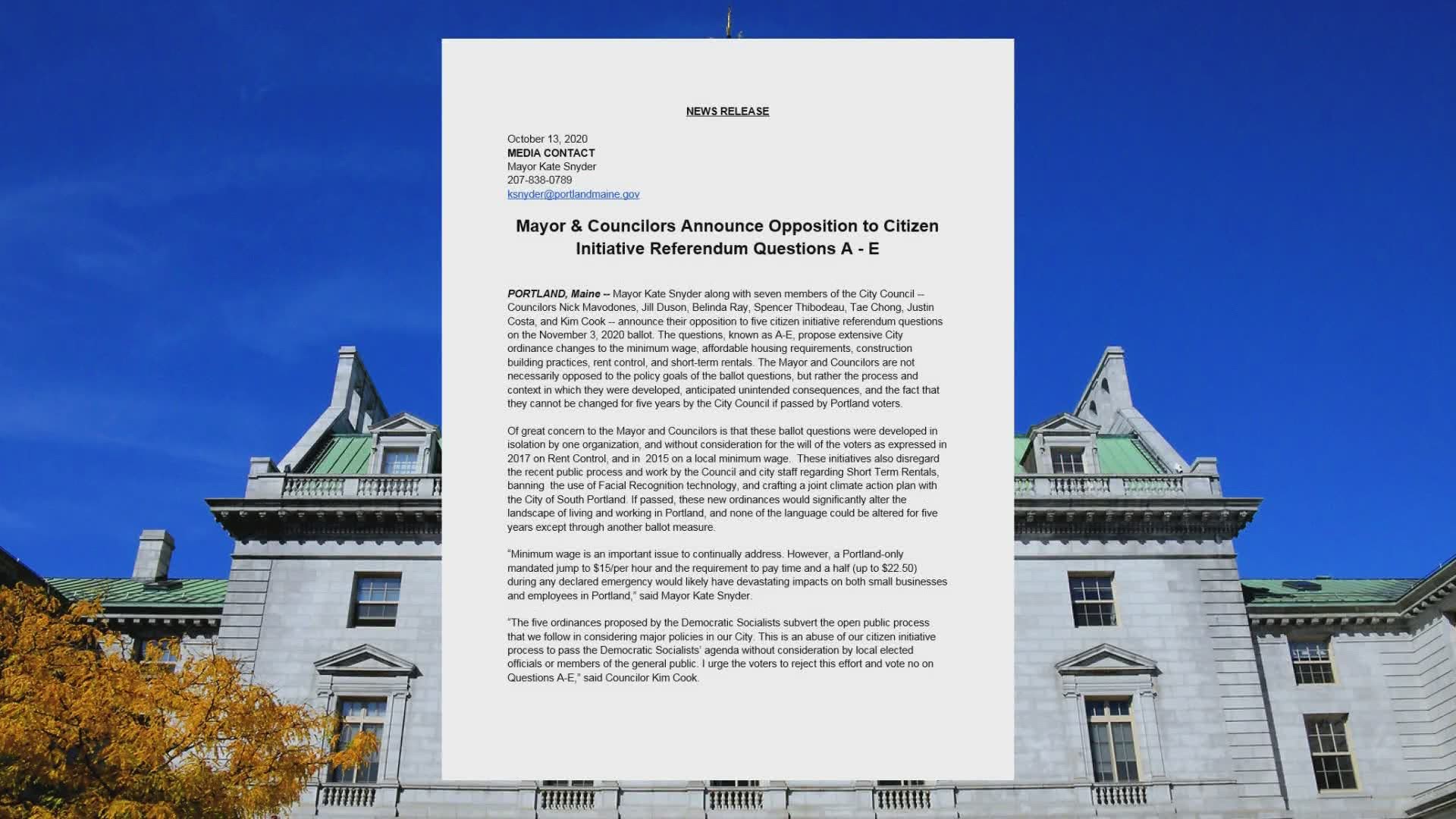 PORTLAND, Maine — For people who live in Portland, there are six referendum questions on their ballot this election season.

Question A is an act to increase minimum wage in Portland to $15 an hour. That includes "time-and-a-half" hazard pay for work performed in times of emergency, such as COVID-19.

Question B is an act to ban facial surveillance use by law enforcement, which the Portland City Council has already banned. This question would allow someone to sue if they believe they've been surveilled in violation of that ban.

Question C is an act to implement a Green New Deal. It would require stricter environmental standards for some building projects, requiring the use of solar-panels or living roofs.

Question D is an act to protect tenants by capping annual rent increases, linking it to the rate of inflation.

Question E is an act to restrict short-term rentals, like Airbnb's.

Question F is an act to modify marijuana businesses.

Portland Referendum Question A would raise minimum wage to $15/hour, with a time and a half requirement during emergencies (including the pandemic). 'People First Portland' volunteer Kate Sykes weighs in on whether Portland business owners could afford this. @newscentermaine pic.twitter.com/wpC2e3rxCj

Questions A-E are being pushed forward by ballot question committee 'People First Portland,' which partners with the Maine Democratic Socialists of America.

Organization volunteer Kate Sykes said, "What we're doing is giving people the option to directly say 'yes' to a future in Portland that puts people first."

Sykes says the questions are a direct reflection of the will of Portlanders.

"This process is actually coming from 'the people,' so to level a complaint that there was no public input is frankly unsupportable."

As for whether Portland businesses could handle paying workers a potential $22-minimum wage during the Pandemic, Sykes says federal stimulus would make that possible.

"The way that we see this-- we have a stimulus package for small business and all we're saying is that support should be shared with the workers who are doing this essential work," said Sykes.

"We believe that businesses can afford to do this and that workers deserve that kind of respect."

Portland Mayor Kate Snyder along with seven members of the city council have come out in opposition to referendum questions A-E. They say they are not necessarily opposed to the goals of the ballot questions, but rather how they were developed, concern over unintended consequences, and the fact that they cannot be changed for five years by the City Council.

In a press release, Mayor Snyder writes: "Minimum wage is an important issue to continually address. however, a portland-only mandated jump to $15/per hour and the requirement to pay time and a half (up to $22.50) during any declared emergency would likely have devastating impacts on both small businesses and employees in Portland."

Portland business owner Chris Carleton shares his concerns on Twitter, saying in part: "I've always put my employees first, I pay them wages well above this proposal... This is too much."

I have busted my ass to make my business a place someone can have a career. I've always put my employees first, I pay them wages well above this proposal, and we now offer a health care plan for full timers. This is too much. https://t.co/F5gdPzLIDg

The Portland Press Herald Editorial Board put out its endorsement on Wednesday, October 14 saying Portland should vote 'No' on questions A through E.