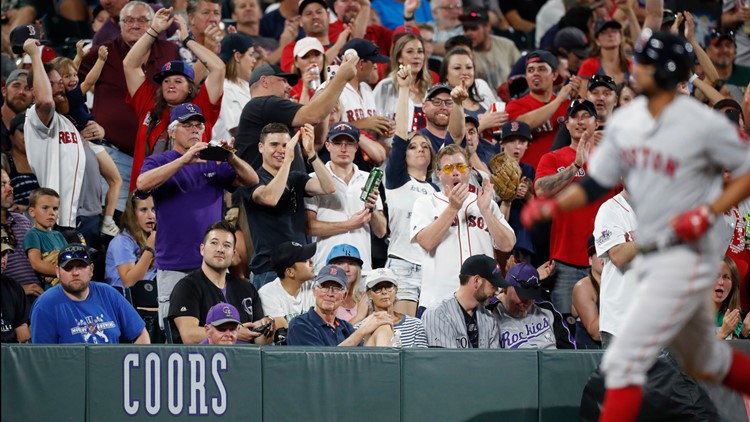 'Play it again,' says Bogey and promptly knocks in his 2nd home run

DENVER — Xander Bogaerts went deep twice as the Boston Red Sox extended their home run streak to 18 games in a 7-4 win over the Colorado Rockies on Wednesday night.

It's the third-longest streak in franchise history. Boston's best run was 22 straight games with a homer in 2016.

The heart of the order powered the Red Sox as they finished a two-game sweep of Colorado. Rafael Devers, Bogaerts and J.D. Martinez went a combined 8 for 14 with four home runs. Bogaerts had a two-run homer in the fifth inning and a solo shot in the seventh. Martinez got things rolling with a two-run drive in the third, and Devers went deep in the ninth.

Martinez has 32 homers, with Bogaerts at 30 and Devers 28. All three are also hitting over .300. The Red Sox have never had three players finish over .300 and with 30 or more homers.

Eduardo Rodriguez (16-5) lasted five innings and allowed three runs. The left-hander extended his shutout streak to 21 innings before Garrett Hampson put down a run-scoring bunt with two outs in the fourth. Rodriguez gave up a pair of two-out RBI singles in the fifth to make it a 5-3 game. He avoided more damage thanks to a diving play by Devers at third base.

There were some theatrics in the ninth. Charlie Blackmon disagreed with a called third strike by plate umpire Jerry Meals and threw his bat down. A heated Blackmon was tossed for the third time in his career. Moments later, Rockies manager Bud Black was ejected, too.

Brandon Workman struck out the side for his ninth save.

Colorado tinkered with its lineup by moving Trevor Story into the leadoff spot. Story had two singles and a walk. He also lined out with the bases loaded in the fourth, tossing down his bat in frustration.

Red Sox: LHP David Price (wrist) will start Sunday at the Los Angeles Angels. ... LHP Chris Sale (left elbow inflammation) went to Fort Myers, Florida, for treatment and to visit family with the team on the road. ... OF Andrew Benintendi was out of the starting lineup due to tightness in his left side.

Rockies: OF David Dahl said he's running on an underwater treadmill to heal his right ankle. "Getting better every day," Dahl said.

Red Sox: An off day Thursday before opening a three-game series at the Angels. RHP Nathan Eovaldi (1-0, 6.64 ERA) starts Friday.