The monument honors almost 400 veterans who served in the military from the town of Plymouth. 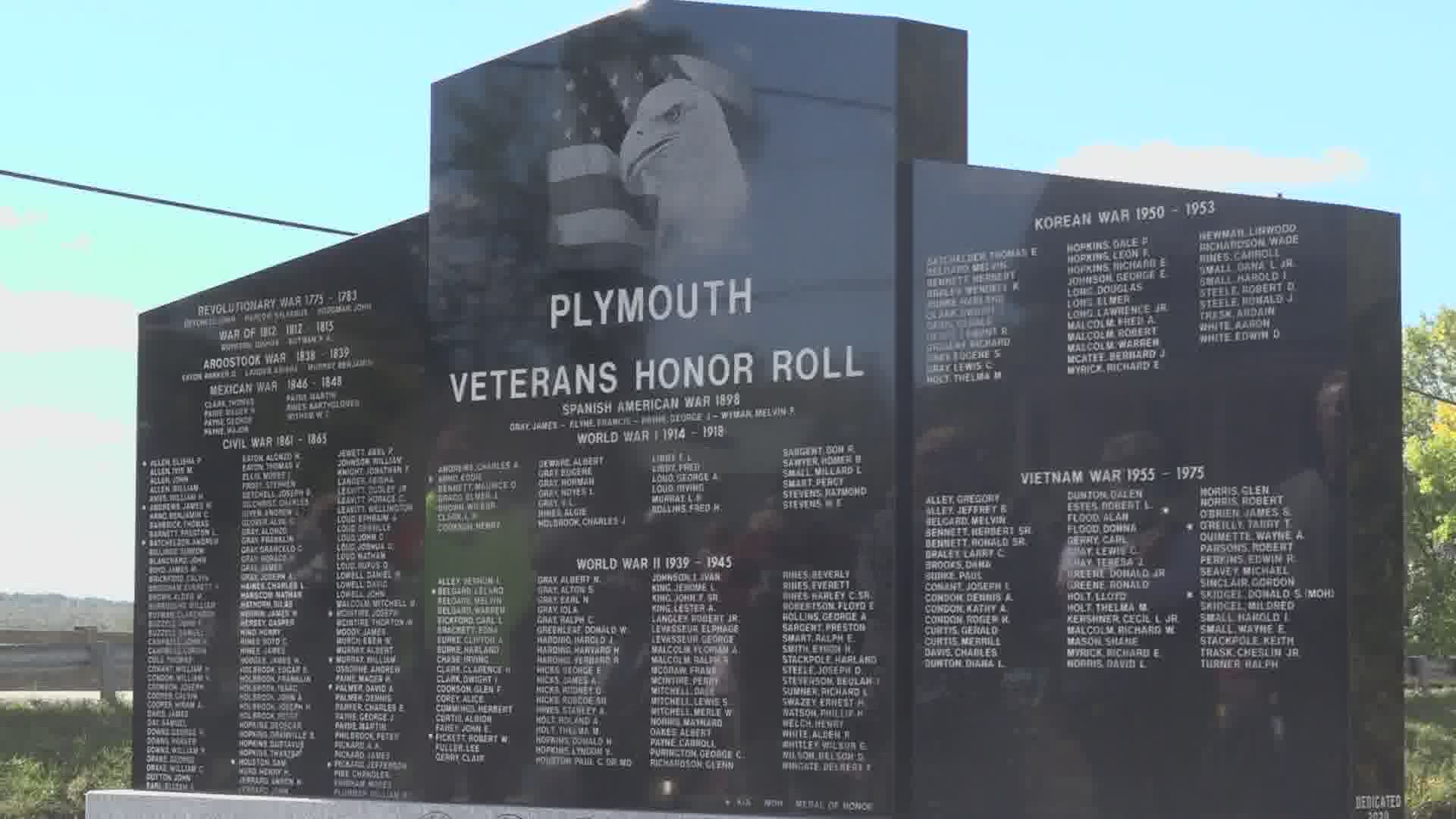 PLYMOUTH, Maine — A new veterans memorial was dedicated and unveiled Saturday morning in the center of the town of Plymouth.

A large crowd of residents showed up for the highly anticipated day.

"It's been a journey that has been completed today," says Linda Seavey.

Seavey came up with the idea of creating a larger granite monument that would sit near the old veterans memorial in town. This new memorial has the name of almost 400 veterans that when enlisted, were from Plymouth.

Every name on the older monument is also on the new monument.

Linda Seavey started this project three years ago, with the help of Kathy Condon.

"We designed it! Linda and I went from town to town, from northern Maine to southern Maine, east to west, to pick out a monument that we want that represented the town of Plymouth," says Condon.

After three years of hard work, the granite monument now stands tall, honoring all the veterans that served in uniform from the town of Plymouth.

Codon went to every cemetery in Plymouth with a clipboard in hand to make sure she took note of every single veteran that served and had enlisted to serve from town. "It was quite a project, and I'm sure there are more names to be found and added to this monument," says Condon.

Today in Plymouth — a ceremony to dedicate and unveil a veteran memorial sitting in the center of town. It honors more almost 400 people who served in the military just from this small town in Maine. #NEWSCENTERmaine pic.twitter.com/arx3aeuZ28

Jack King served a total of 34 years, both in the airforce and the army. Ten of King's family members have their names engraved on this monument.

"They didn't necessarily sacrifice their life, but they gave their lives fighting for what they believed in," says King.

Galen Dunton is a Vietnam veteran and served 21 years in the U.S. Coastguard.

Seavey and Condon say now there is an even bigger goal to accomplish with this monument-- to educate the younger generations to come about the rich history of the veterans from their town and what they did to protect this country.

"It's an honor to just spend some time here, look at these names, and think about what others have done for our country," says Seavey.

King tells NEWS CENTER Maine, today was a very special day for him. "To see all of my family be listed on a nice monument now and recognized and all of these guys," says King.

"It's nice to be remembered!" says Dunton.

Now in Plymouth, a symbol standing for those who served and the many who continue to serve for the freedoms U.S. citizens and residents enjoy today.

RELATED: Serving our country, then and now