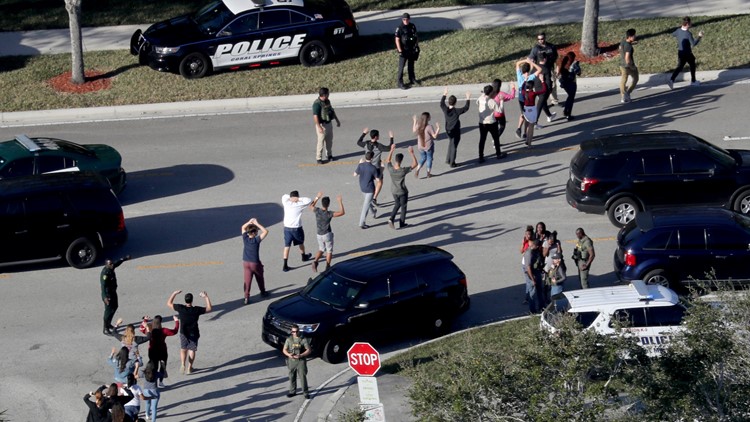 Photo by: AP
FILE - In this Wednesday, Feb. 14, 2018, file photo, students hold their hands in the air as they are evacuated by police from Marjory Stoneman Douglas High School in Parkland, Fla., after a shooter opened fire on the campus. A Florida law that allows judges to bar anyone deemed dangerous from possessing firearms has been used 3,500 times since its enactment after the 2018 high school massacre. An Associated Press analysis shows the law is being used unevenly around the state. (Mike Stocker/South Florida Sun-Sentinel via AP, File)

FT LAUDERDALE, Fla. — A Florida gun law that allows judges to bar anyone deemed dangerous from possessing firearms has been used 3,500 times since its enactment after a 2018 high school massacre. But the law is being applied unevenly around the state.

Maine is one of sixteen other states including the District of Columbia have similar laws, the Associated Press says; 11 of those states’ laws were enacted after the shooting in Parkland. The law is supported by legislators of both parties, and President Donald Trump has at times supported a federal proposal but has not strongly advocated it before Congress.

The Associated Press explains that to get a ‘red flag’ order in Florida, police agencies must file a request with a civil court, citing serious mental illness or threats a person has made. If the judge agrees, the person must surrender their firearms to police. Within two weeks, a hearing is held during which the judge decides whether to take the person's weapons away for a year. Police agencies can apply for an extension if there is evidence a person remains a threat after a year. If not, the guns are returned.

Supporters say the measure is needed because the suspect who authorities say killed 17 at Marjory Stoneman Douglas High School in Parkland two years ago was able to buy guns despite a history of psychotic behavior. Opponents say it violates the right to bear arms and the right against unlawful seizures of property.

An Associated Press analysis shows the law is being used unevenly around the state. When the law was enacted in March 2018 through December 2019, analysis shows there was a wide disparity in its per capita usage in Florida’s 67 counties.

The sheriffs whose counties had no or few red flag orders during the reviewed period said in an AP questionnaire that they are not philosophically opposed to the law — they just haven't needed it.

The Associated Press said crews said most potential red flag cases are asked to surrender their guns to a relative, who is told to not return them until the person finishes mental health treatment. Santa Rosa Sheriff Bob Johnson said that approach works better than confrontation and has never backfired.

RELATED: Father of Parkland shooting victim yells out during State of the Union, escorted out