US lets in asylum-seekers stuck in Mexico, ends Trump policy

A U.N. migration agency plans to test asylum-seekers for COVID-19 and will quarantine anyone who tests positive for 10 days before they enter the United States. 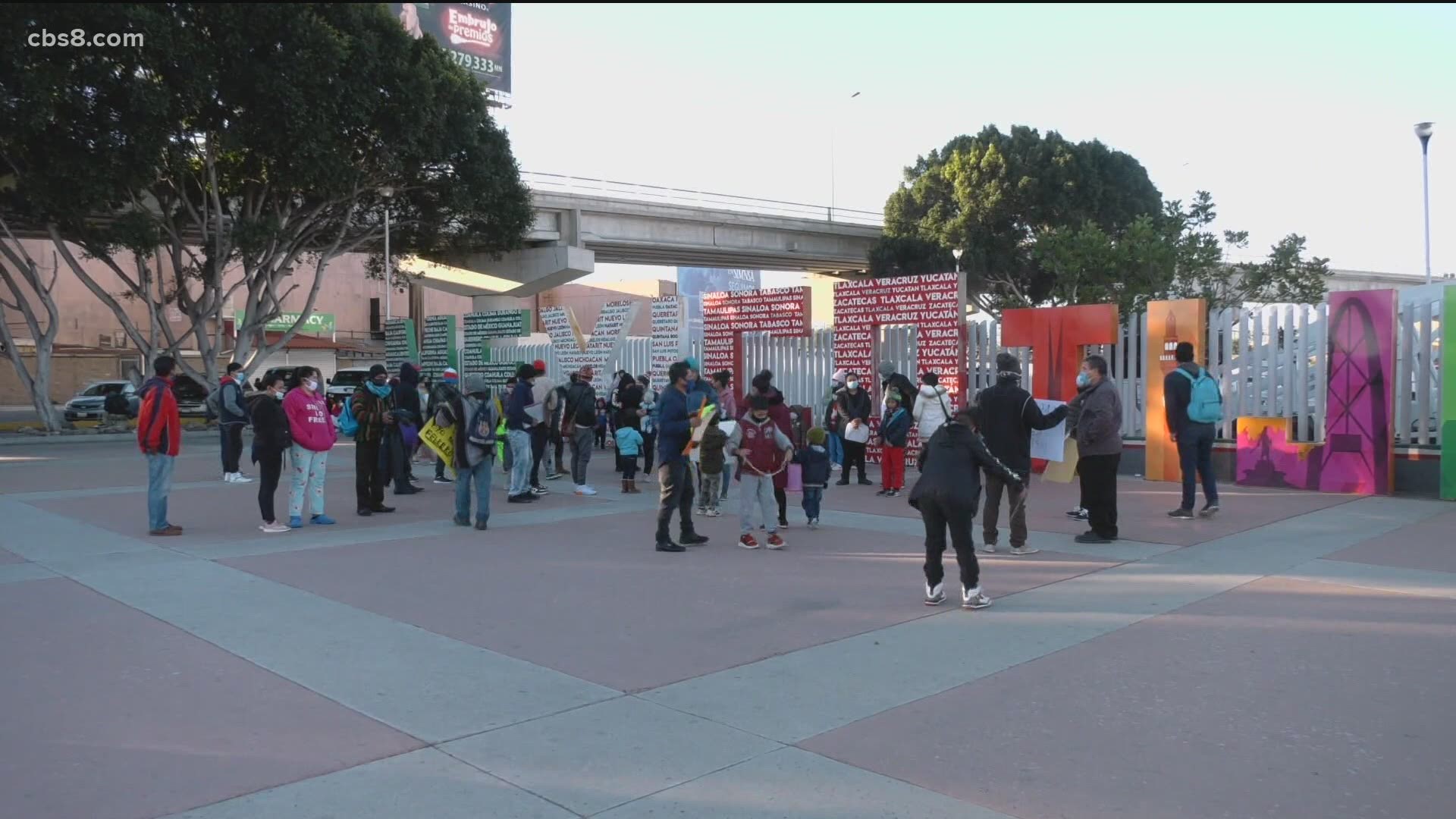 SAN DIEGO — After waiting months and sometimes years in Mexico, people seeking asylum in the United States are being allowed into the country starting Friday as they wait for courts to decide on their cases, unwinding one of the Trump administration’s signature immigration policies that President Joe Biden vowed to end.

The number of asylum-seekers coming in initially will be very limited, beginning Friday at a border crossing in San Diego and expanding to Brownsville, Texas, on Monday and El Paso, Texas, next Friday. U.S. officials are warning people not to come to the U.S.-Mexico border, saying an estimated 25,000 people with active cases in the “Remain in Mexico" program and several hundred who are appealing decisions should register on a website that the U.N. High Commissioner for Refugees is launching early next week.

The International Organization for Migration, the U.N. migration agency, plans to test asylum-seekers for COVID-19 and will quarantine anyone who tests positive for 10 days before they enter the United States.

Friday marks a key milestone in unraveling one of former President Donald Trump's cornerstone policies to deter people from seeking protection from persecution and returns the U.S. asylum system to the way it worked for decades. But there are unanswered questions, including how Central Americans who returned home will get back to the U.S.-Mexico border.

It's also unclear how long it will take to work through more than 25,000 active Remain in Mexico cases, with the oldest going first. U.S. officials say two of the border crossings can each handle up to 300 people a day and a smaller crossing can take fewer, but they will start well below those numbers. The officials didn't specify the crossings.

Biden is quickly making good on a campaign promise to end the policy known officially as “Migrant Protection Protocols,” which Trump said was critical to reversing a surge of asylum-seekers that peaked in 2019. The program exposed people to violence in Mexican border cities and made it extremely difficult for them to find lawyers and communicate with courts about their cases.

About 70,000 asylum-seekers were part of the program since it started in January 2019. Asylum-seekers whose cases were dismissed or denied are not eligible to return to the country, but U.S. officials have not ruled out some form of relief later.

Credit: AP
Migrants waiting to cross into the United States wait for news at the border crossing Wednesday, Feb. 17, 2021, in Tijuana, Mexico. After many months and sometimes up to two years of waiting in Mexico for U.S. immigration court hearings, migrants seeking asylum in the United States are being allowed in the country starting Friday to be released until their cases conclude. (AP Photo/Elliot Spagat)

The Biden administration, which stopped enrolling new arrivals on its first day, said last week that asylum-seekers with active cases would be released in the United States with notices to appear in immigration courts closest to their final destinations. It brought huge relief to those who are eligible, while U.S. and U.N. officials urged against a rush to the border.

Nearly 100 people waited for hours Wednesday in Tijuana, Mexico, at a border crossing with San Diego before a Mexican immigration official took questions about the policy change.

Edwin Gomez, who said his wife and 14-year-old son were killed by gangs in El Salvador after he couldn't pay extortion fees from his auto repair shop, was eager to join his 15-year-old daughter in Austin, Texas. She already won asylum and is living with family.

“Who thought this day would come?” Gomez, 36, said with a smile. “I never thought it would happen.”

Across the border from Texas' Rio Grande Valley, Enda Marisol Rivera of El Salvador and her 10-year-old son have been braving below-freezing temperatures this week, snuggling under piles of donated blankets in their makeshift tent of tarps. Their propane gas stove froze, she said. Despite the added hardship from the Arctic blast that hit Texas and northern Mexico, Rivera was in good spirits and closely watching the news.

Rivera and her son are among about 1,000 migrants living in the tent camp in a sprawling park just south of the Rio Grande in the Mexican city of Matamoros. About 850 of them have applied for asylum and were told to wait in Mexico for their court dates. Many in the camp turned down offers this week to be transferred to city shelters, fearing they would lose their chance at being allowed into the United States if they didn't stay close to the border. The bitter cold was just another burden for those who fled violence in their homelands and are living in limbo. Some have been waiting for more than two years.

Rivera was hopeful she would be allowed to come to the United States, where she could live with her sister in Los Angeles as her case wound through immigration court.

“We have faith in God that we will be allowed in," she said Wednesday. “We have already spent enough time here.”

Nongovernmental organizations, including Jewish Family Service of San Diego and Global Response Management working in Matamoros and Brownsville, will play crucial roles in arranging temporary shelter and transportation once asylum-seekers enter the U.S.

“This problem was years in the making, and they’re trying to find solutions, but they are dealing with things coming up in real time,” said Andrea Leiner, spokeswoman for Global Response Management, which has been providing medical care at the camp in Matamoros. “I do think we need to give a little patience and leeway to sort this out as the actors involved get the plans in place to start doing this in a safe and effective manner.”

But she said everyone is also on edge, especially asylum-seekers.

“People are incredibly hopeful that this is their chance to get across, but there also is a lot of anxiety and fear that somehow if they do the wrong thing and they’re not at the right place at the right time, they might miss out,” Leiner said.

RELATED: Biden administration to allow 25,000 asylum-seekers into US