By the time President-elect Joe Biden is sworn in, President Donald Trump will already have landed at his private Mar-a-Lago club in Florida.

WASHINGTON — His presidency over, Donald Trump said farewell to Washington on Wednesday but also hinted about a comeback despite a legacy of chaos, tumult and bitter divisions in the country he led for four years.

“So just a goodbye. We love you," Trump told supporters at Joint Base Andrews in Maryland where he walked across a red carpet and boarded Air Force One to head to Florida. "We will be back in some form.”

Trump departed office as the only president ever impeached twice, and with millions more out of work than when he was sworn in and 400,000 dead from the coronavirus. Under his watch, Republicans lost the presidency and both chambers of Congress. He will be forever remembered for inciting an insurrection, two weeks before Democrat Joe Biden moved into the White House, at the Capitol that left five dead, including a Capitol Police officer, and horrified the nation. It was on Trump's Inauguration Day, Jan. 20, 2017, that he had painted a dire picture of “American carnage."

Credit: AP
President Donald Trump and first lady Melania Trump walk to board Marine One on the South Lawn of the White House, Wednesday, Jan. 20, 2021, in Washington. Trump is en route to his Mar-a-Lago Florida Resort. (AP Photo/Alex Brandon)

The first president in modern history to boycott his successor’s inauguration, Trump is still stewing about his loss and maintains that the election won by Biden was stolen from him. Republican officials in several critical states, members of his own administration and a wide swath of judges, including those appointed by Trump, have rejected those arguments.

Trump refused to participate in any of the symbolic passing-of-the-torch traditions surrounding the peaceful transition of power, including inviting Joe and Jill Biden to the White House for a get-to-know-you visit.

RELATED: What is the schedule for Joe Biden's inauguration?

He did follow at least one tradition: The White House said Trump left behind a note for Biden. A Trump spokesman, Judd Deere, declined to say what Trump wrote or characterize the sentiment in the note, citing privacy for communication between presidents.

Members of Trump’s family gathered for the send-off on the military base along with the president’s loyalists, who chanted “We love you!” “Thank you, Trump” and “U.S.A.” Four Army cannons fired a 21-gun salute.

Speaking without notes, Trump said his presidency was an “incredible four years.” He told the crowd that he and first lady Melania Trump loved them and praised his family for its hard work, saying they could have chosen to have an easier life.

“It’s been something very special. We’ve accomplished a lot,” Trump said, citing the installation of conservative judges, creation of the space force, development of coronavirus vaccines and management of a robust pre-pandemic economy. “I hope they don’t raise your taxes, but if they do, I told you so,” he said of the Biden administration.

He acknowledged his was not a “regular administration” and told his backers that he would be returning in some form. He said the Trump campaign had worked so hard: “We’ve left it all on the field," he said. 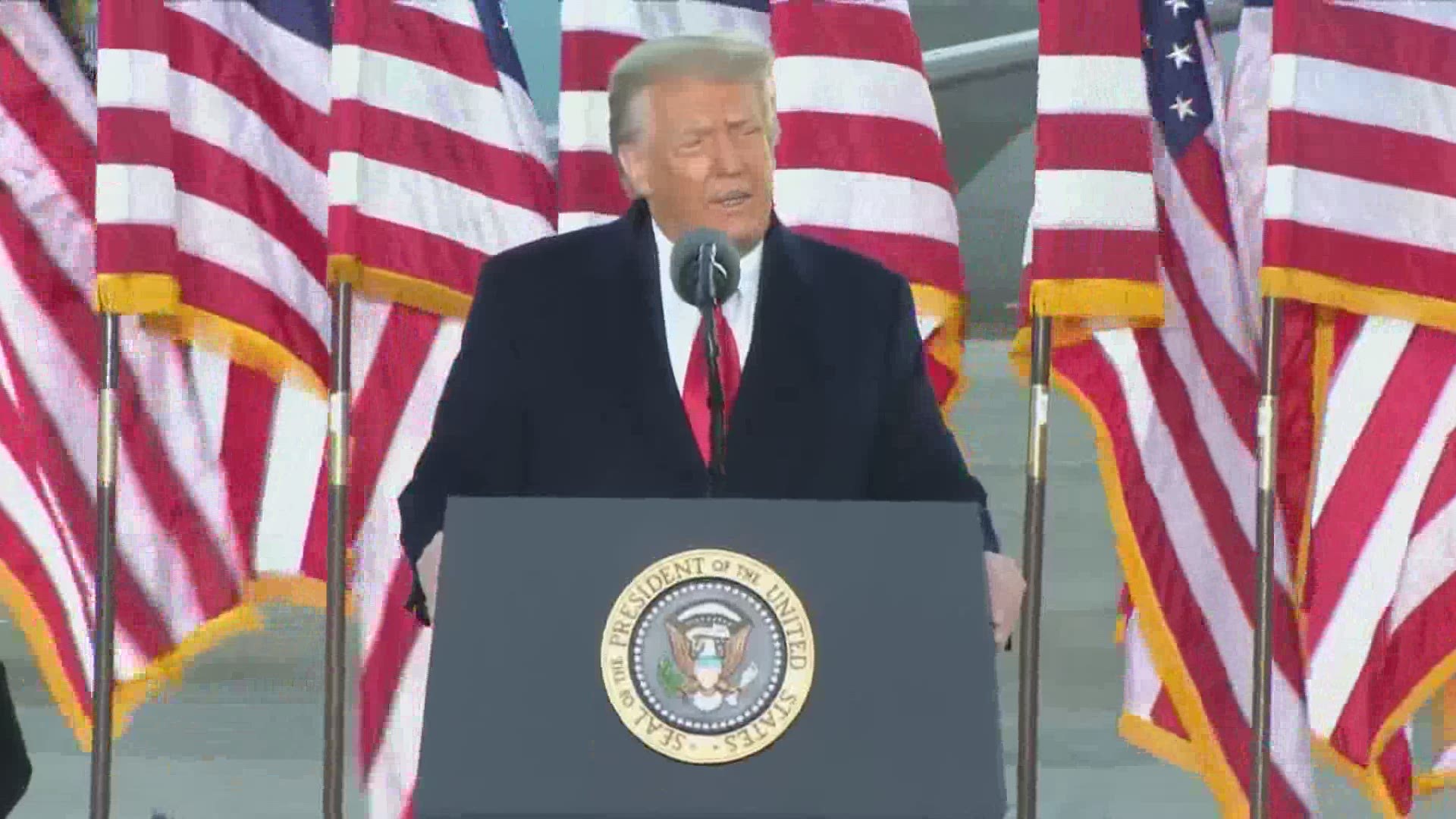 Without mentioning Biden's name, Trump wished the new administration great luck and success, which he said would be made easier because he had laid “a foundation.”

“I will always fight for you," he told the crowd. “I will be watching. I will be listening.”

Before arriving at the airport, Trump told reporters on the South Lawn of the White House that being president had been the honor of his lifetime.

“We love the American people, and again, it has been something very special," he said over the sound of the Marine One helicopter. "And I just want to say goodbye, but hopefully it’s not a long-term goodbye. We’ll see each other again.”

Trump and first lady Melania Trump landed in Florida more than an hour before Biden was sworn in as the 46th U.S. president. Air Force One flew low along the Florida coast as Biden's inauguration ceremony flashed across televisions on board. A loud cheer went up from the crowd awaiting his arrival when the plane made a low approach to Palm Beach International Airport as the “Star-Spangled Banner” played over loudspeakers.

Several hundred supporters lined his route to Trump's Mar-a-Lago club. It had a party atmosphere. Trump and American flags waved, with many supporters wearing red, white and blue clothing.

Shari Ackerly parked her three-wheeled motorcycle along the road, painted with red, white and blue stripes and “Trump - Make America Great.” A Trump-Pence campaign sign laid against the headrest, the vice president’s name crossed out.

Ackerly said she wanted to show her support for Trump, saying she supported him since he gave Sen. Ted Cruz the nickname “Lyin’ Ted” in the 2016 Republican debates. “He told it like it is,” she said.

The crowd of supporters grew as Trump got closer to his club. His vehicle slowed to a crawl and he saw signs proclaiming: “THANK YOU” and “TRUMP WON!”

As supporters chanted “We love you!” Trump mouthed “I love back” and raised his fist.

In Florida, he will face an uncertain future.

Aides had urged Trump to spend his final days in office trying to salvage his legacy by highlighting his administration’s achievements — tax cuts, scaled-back federal regulations, normalizing relations in the Middle East. But Trump largely refused, taking a single trip to the Texas border and releasing a video in which he pledged to his supporters that “the movement we started is only just beginning.” In his final hours, Trump issued pardons for more than 140 people, including his former strategist, rap performers, ex-members of Congress and other allies of him and his family. Then, just as Biden made his entrance at the Capitol but before he took the oath of office, Trump announced that he was pardoning Al Pirro, the ex-husband of Fox News Channel host and Trump ally Jeanine Pirro. Al Pirro was convicted of conspiracy and tax evasion charges and sentenced to more than two years in prison in 2000.

Trump will be in Florida with a small group of former White House aides as he charts a political future that looks very different now from just two weeks ago.

Before the Capitol riot on Jan. 6, Trump had been expected to remain his party’s de facto leader, wielding enormous power as he served as a kingmaker and mulled a 2024 presidential run. But now he appears more powerless than ever — shunned by so many in his party, impeached twice, denied the Twitter bullhorn he had intended to use as his weapon and even facing the prospect that, if he is convicted in his Senate trial, he could be barred from seeking a second term.

For now, Trump remains angry and embarrassed, consumed with rage and grievance. He spent the week after the election sinking deeper and deeper into a world of conspiracy, and those who have spoken with him say he continues to believe he won in November. He has lashed out at Republicans for perceived disloyalty and has threatened, both publicly and privately, to spend the coming years backing primary challenges against those he feel betrayed him.

Some expect him to eventually turn completely on the Republican Party, perhaps by flirting with a run as a third-party candidate as an act of revenge.

For all the chaos and drama and bending the world to his will, Trump ended his term as he began it: largely alone. The Republican Party he co-opted finally appeared to have had enough after Trump’s supporters violently stormed the Capitol, hunting for lawmakers who refused to go along with Trump’s unconstitutional efforts to overturn the results of a democratic election.

White House cleaning crews worked overnight Wednesday and were still going as the sun rose to get the building cleaned and ready for its new occupants. Most walls were stripped down to the hooks that once held photographs, and offices were devoid of the clutter and trinkets that gave them life.

While Trump has left the White House, he retains his grip on the Republican base, with the support of millions of loyal voters, along with allies still helming the Republican National Committee and many state party organizations.

The city he leaves will not miss him. Trump rarely left the confines of the White House, except to visit his own hotel. He and his wife never once ate dinner at any other local restaurant and never ventured out to shop in its stores or see the sites. When he did leave, it was almost always to one of his properties: his golf course in Virginia, his golf course in New Jersey, his private club and nearby golf course in Palm Beach, Florida.

The city overwhelmingly supported Biden, with 93% of the vote. Trump received just 5.4% of the vote — or fewer than 18,600 ballots — not enough to fill the Washington Capitals hockey arena.

Credit: AP
President Donald Trump gestures as he boards Marine One on the South Lawn of the White House, Wednesday, Jan. 20, 2021, in Washington. Trump is en route to his Mar-a-Lago Florida Resort. (AP Photo/Alex Brandon)