Trump's poultry pardon means Peas and Carrots will get to live the rest of their lives at a Virginia farm. 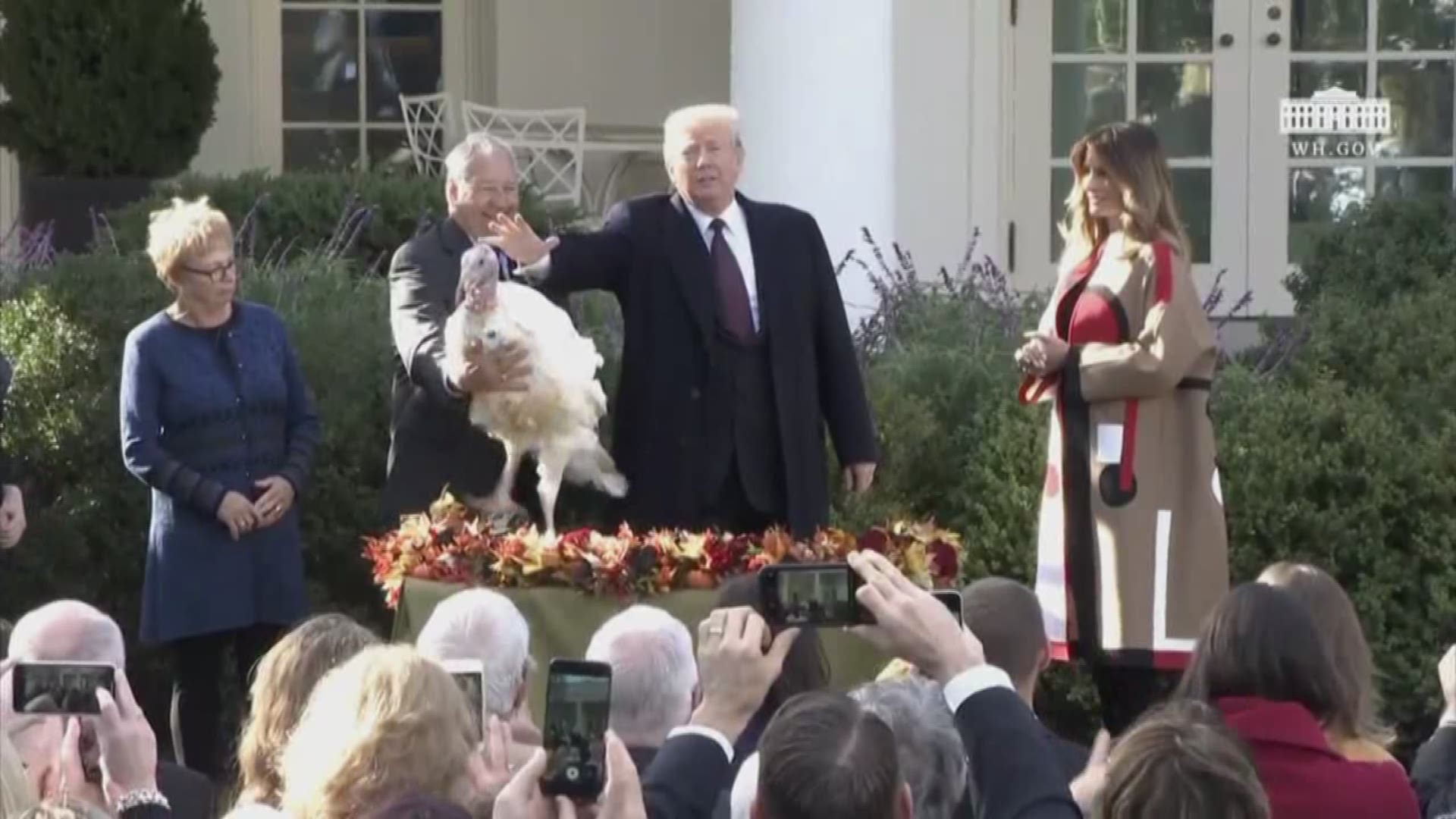 In an annual Thanksgiving tradition, President Donald Trump has used the power of his office to keep a pair of turkeys off the holiday table.

Trump's poultry pardon means the two turkeys — a 39-pound bird named Peas and a 41-pounder named Carrots — will get to live the rest of their lives at a Virginia farm.

Both were raised on a farm near Huron, South Dakota. First lady Melania Trump joined her husband for the act of mercy carried out during a light-hearted ceremony in the White House Rose Garden.

Trump was traveling to his Florida estate later Tuesday to spend the Thanksgiving holiday with family.

Peas and Carrots, both weighing about 40 pounds, stood out from the flock and were raised specifically for this moment — being treated almost as well as any human.

The "presidential flock" was presented to the public for the first time Nov. 14 during their press tour around their hometown of Huron. South Dakota's stars traveled to Washington D.C. on Saturday in the back of an SUV.

Jeff Sveen, chairman of the National Turkey Federation and Chairman of the Board of Dakota Provisions, is in charge of Peas and Carrots as they meet the public and national media this week. He joked that the VIP turkeys enjoyed a more comfortable road trip than their drivers.

But even though they're the nation's most important birds this week, Sveen still had to get permits to transport them across state lines.

"They get a lot of special treatment, but on some things they're just regular birds," Sveen said.

Their special treatment this week includes five-star accommodations at the Waldner Intercontinental Hotel a block away from the White House. The hotel costs about $500 a night and is known for hosting presidents and dignitaries.

According to People Magazine, Peas and Carrots will stay in a specially equipped suite with wood shavings and plastic on the floor along with food and water. Spa services will be part of their visit.

"They'll probably get some feather fluffing – like a haircut. Maybe a massage. They will be able to order room service and our chef is planning to cook up some special dishes for them as well," said Janet Scanlon, the Willard InterContinental's marketing director.

Ruben Waldner, Riverside Colony turkey manager, raised the birds and will guard them throughout the D.C. trip. He'll sleep in an adjoining room at the Willard and said he'll get up about three or four times a night to make sure they're safe.

"If the president's got the (secret service) on him all the time, why can't my turkeys have one?" Waldner said, referring to himself as their personal security guard

Peas and Carrots were both raised in the "Presidential Suite" at the Riverside Colony near Huron. The turkeys grew up in the air-conditioned "mansion for birds" as Waldner whittled down the 50-bird production to the chosen two.

The turkeys drank reverse osmosis bottled water; were given a special feed of corn, soybean meal, and vitamins; and are antibiotic free.

They were chosen for their good looks, charm, and overall demeanor, Waldner said.

The first Thanksgiving was a three-day feast in 1621. Turkey was not on the menu.

Thanksgiving wasn't made a national holiday by Congress until 1941, almost a century after President Abraham Lincoln declared the final Thursday in November as a national day of thanksgiving.

President Lincoln was the first president to "pardon" a turkey. It was recorded in an 1865 dispatch by White House reporter Noah Brooks that "a live turkey had been brought home for the Christmas dinner, but [Lincoln's son Tad] interceded on behalf of its life. ... [Tad's] plea was admitted and the turkey's life spared."

President Harry S. Truman was the first president to be presented with a turkey from the Poultry and Egg National Board and the National Turkey Federation to promote the poultry industry in 1948. Truman accepted two turkeys and remarked that they would "come in handy" for Christmas dinner.

The pardoning of turkeys was sporadic up until the '80s. President John F. Kennedy said of his 1963 presented turkey, "Let's keep him going" as a beginning of pardoning in the 20th century. Patricia Nixon sent the 1973 bird to the Oxon Hill Children's Farm and Rosalynn Carter sent the 1978 turkey to the Evans Farm Inn to live in a mini zoo.

Turkey pardoning became the norm under Ronald Reagan by 1981 and it became a formal tradition with George H.W. Bush in 1989.

Benjamin Franklin wanted the turkey to be the national bird, not the eagle.

54.3 million people will travel 50 miles or more away from home, a 4.8 percent increase over last year according to AAA. That will be the highest volume of Thanksgiving travelers since 2005.