Trump disavows 'Send her back!' chant as Omar stands defiant

Trump fired off a series of tweets Friday again targeting a group of freshmen Democratic Congresswomen. 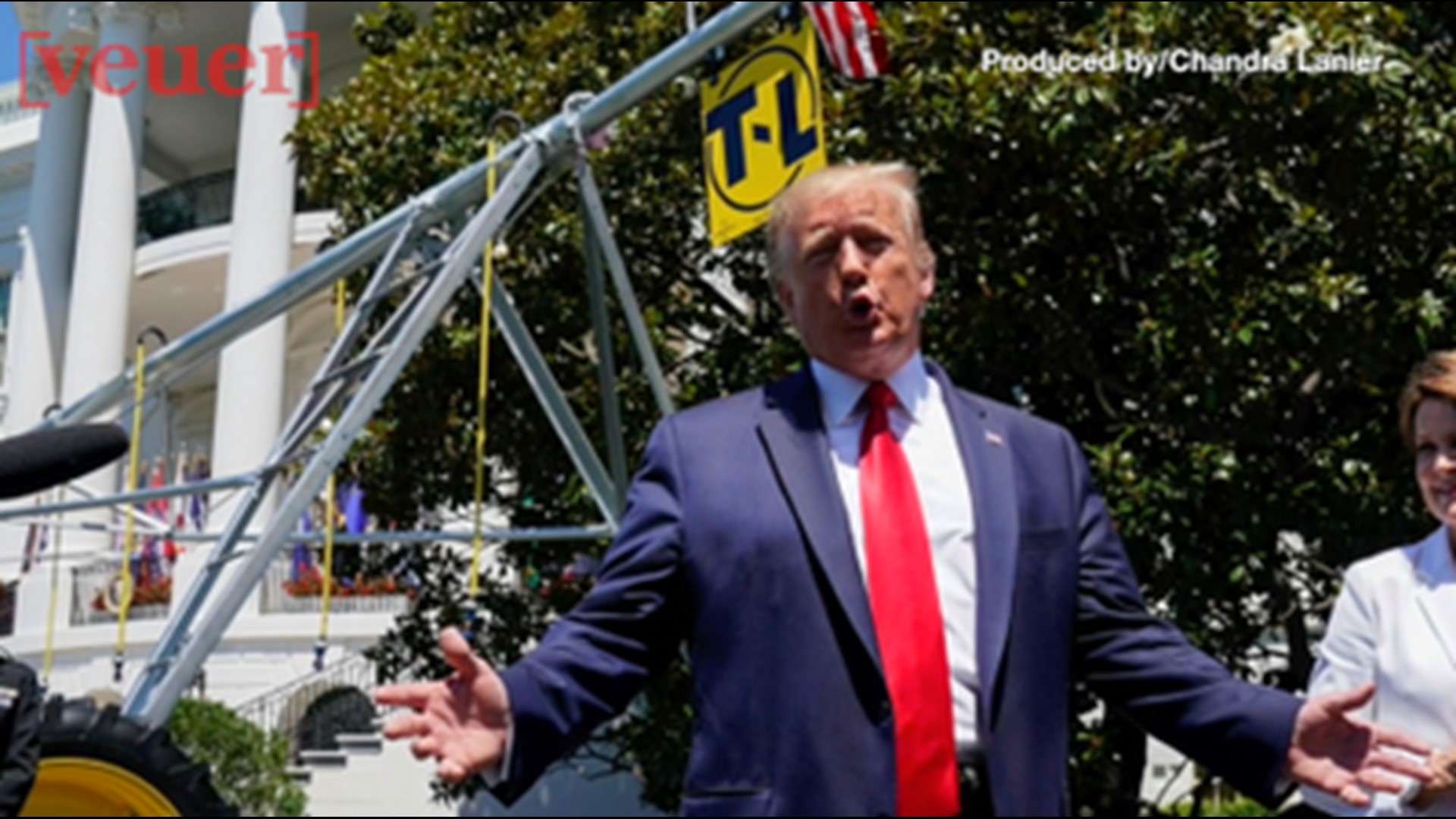 WASHINGTON — President Donald Trump has chided his supporters who chanted "send her back" when he questioned the loyalty of a Somali-born congresswoman, joining widespread criticism of the campaign crowd's cry after Republicans warned about political blowback from the angry scene.

In a week that has been full of hostile exchanges over race and love of country on both sides, Trump also claimed he had tried to stop the chant at a reelection event Wednesday night in North Carolina — though video shows otherwise. The crowd's "send her back" shouts resounded for 13 seconds as Trump made no attempt to interrupt them. He paused in his speech and surveyed the scene, taking in the uproar.

"I started speaking really quickly," he told reporters Thursday. "I was not happy with it. I disagree with it" and "would certainly try" to stop any similar chant at a future rally.

On Friday, however, Trump appeared less concerned about the matter, tweeting that it was "amazing how the Fake News Media became 'crazed' over the chant 'send her back' by a packed Arena (a record) crowd in the Great State of North Carolina, but is totally calm & accepting of the most vile and disgusting statements made by the three Radical Left Congresswomen."

The taunt's target — Democratic Rep. Ilhan Omar of Minnesota — responded defiantly Thursday. She told reporters at the Capitol that she believes the president is a "fascist" and cast the confrontation as a fight over "what this country truly should be."

"We are going to continue to be a nightmare to this president because his policies are a nightmare to us. We are not deterred. We are not frightened," she told a cheering crowd that greeted her like a local hero at the Minneapolis-St. Paul International Airport as she returned from Washington.

The back-and-forth captured the potential impacts of Trump's willingness to inject racist rhetoric into his reelection fight. Trump's allies distanced themselves from the chant, fretting over the voters it might turn off in next year's election and beyond. Democrats, meanwhile, pointed to the episode as a rallying cry to energy and mobilize their supporters to vote Trump out of office.

"We are ready," Omar said to cheers, before heading to a town hall on Medicare for All.

Trump started the week's tumult by tweeting Sunday that Omar and three other freshmen congresswomen could "go back" to their native countries if they were unhappy here. His other targets — all Trump detractors — were Reps. Alexandria Ocasio-Cortez of New York, Rashida Tlaib of Michigan and Ayanna Pressley of Massachusetts.

All are American citizens, and all but Omar was born in the U.S. She fled to America as a child with her family from violence-wracked Somalia.

The president did not back down from that criticism on Thursday.

The chants at the Trump rally brought scathing criticism from GOP lawmakers as well as from Democrats, though the Republicans did not fault Trump himself.

House Minority Leader Kevin McCarthy of California declared that the chant has "no place in our party and no place in this country."

Rep. Adam Kinzinger of Illinois tweeted that it was "ugly, wrong, & would send chills down the spines of our Founding Fathers. This ugliness must end, or we risk our great union."

Citing Trump's rhetoric, House Democrats said they were discussing arranging security for Omar and the three other congresswomen.

Even by Trump's standards, the campaign rally offered an extraordinary tableau for American politics: a president drinking in a crowd's cries to expel a congresswoman from the country who's his critic and a woman of color.

It was also the latest demonstration of how Trump's verbal cannonades are capable of dominating the news. Democrats had hoped the spotlight on Thursday would be on House passage of legislation to boost the minimum wage for the first time in a decade.

RELATED: Sen. Schumer: Trump's handling of 'send her back' chants was no John McCain moment

RELATED: Trump says he's not happy with 'send her back' chants from North Carolina rally crowd

To many GOP ears, this time the attention wasn't all positive.

Rep. Mark Walker of North Carolina, a conservative who attended Trump's rally, told reporters at the Capitol that the chant "does not need to be our campaign call like we did 'Lock her up' last time."

That was a reference to a 2016 campaign mantra that Trump continues to encourage aimed at that year's Democratic presidential candidate, Hillary Clinton.

Walker, who called the chant "offensive," was among about 10 House GOP leaders who had breakfast Thursday with Vice President Mike Pence at Pence's residence in Washington. Walker said he cautioned Pence that attention to the chant could distract voters next year from the economy and other themes Republicans want to emphasize.

"We don't need to take it that far where we change the narrative of the story," he said he told Pence.

The lawmakers attending agreed that the chant was inappropriate and could prove a harmful distraction, and Pence concurred and said he'd discuss it with Trump, said another participant who described the conversation on condition of anonymity.

In North Carolina, Trump berated each of the four congresswomen and said: "They never have anything good to say. That's why I say, 'Hey if you don't like it, let 'em leave, let 'em leave.'" He added, "I think in some cases they hate our country."

His criticism of Omar included a false accusation that she has voiced pride in al-Qaida.