Wednesday is stimulus check payday for millions of Americans

The second batch of $1,400 stimulus payments showed up via direct deposit Wednesday, but some payments will be coming later in the mail. 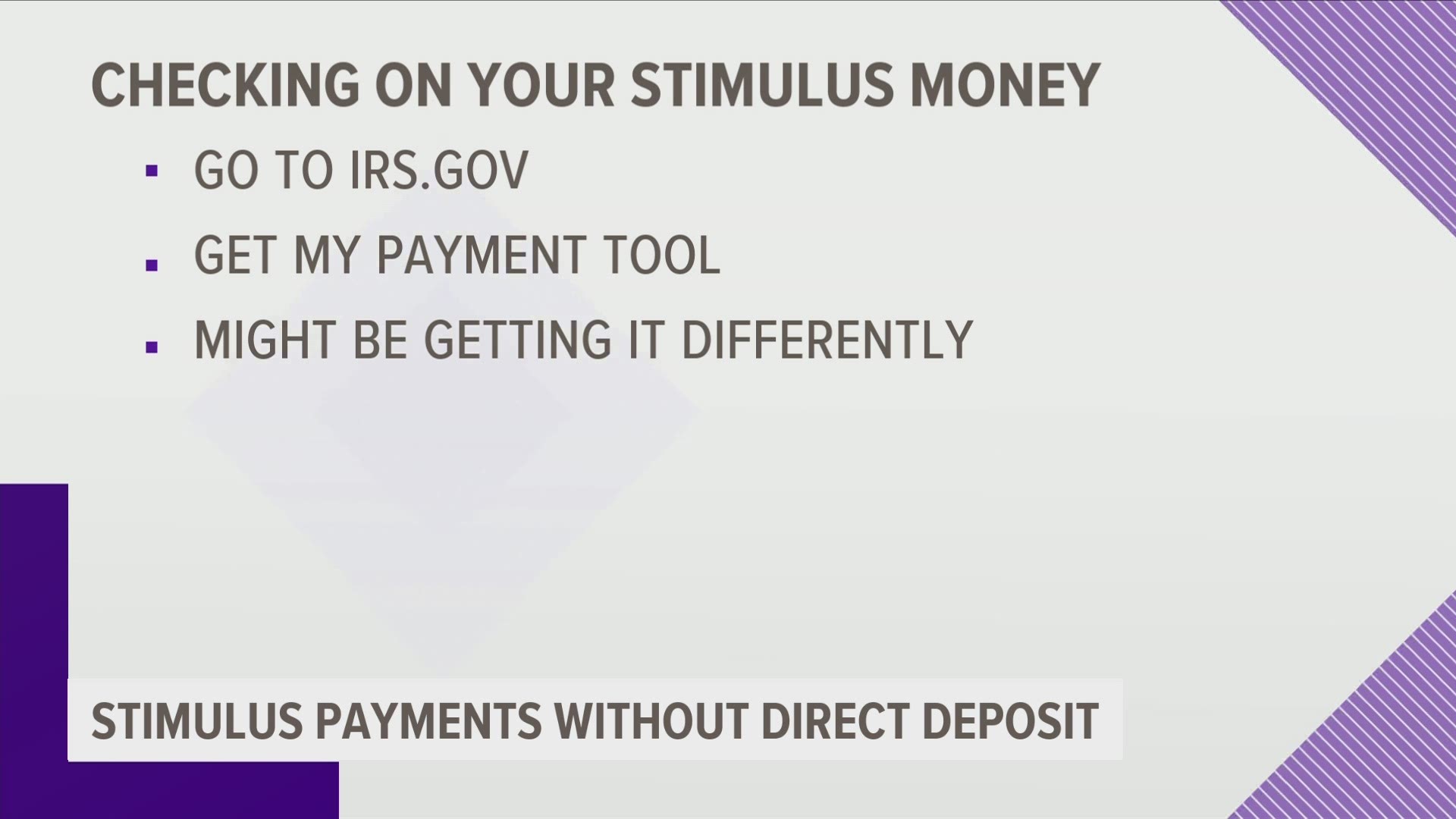 WASHINGTON — Americans waiting for the direct deposit of their third stimulus check should take a look in their bank accounts Wednesday. The Treasury Department said another 37 million payments have gone out in its second batch, reaching a total of 127 million so far since the American Rescue Plan was signed.

But this isn't the final group of deposits, so people need to also be prepared to possibly wait a little longer.

The IRS said Monday that the new batch began processing last Friday and would have an official pay date of Wednesday, March 24. That coincides with what some people may have found when they checked the IRS Get My Payment tool when checking to see when they would receive their money.

For some couples who file their taxes jointly, this may represent the second half of their total stimulus. The IRS confirmed that some couples were getting their money across more than one payment. Members of a Facebook group that was launched after people reported only getting half their stimulus money last week have reported seeing the other half pending in their accounts.

RELATED: Filed as a couple? IRS says stimulus check may be in 2 payments

RELATED: Stimulus #3: Social Security payments, getting the IRS on the phone

"Since this new set of payments will include more mailed payments, we urge people to carefully watch their mail for a check or debit card in the coming weeks," IRS Commissioner Chuck Rettig said in a statement Monday.

The IRS said paper checks will arrive in a white envelope from the U.S. Department of the Treasury. It will look similar to a tax refund check, but it will say "Economic Impact Payment" in the memo field.

The debit card will also arrive in a white envelope from the Treasury Department. The VISA card has MetaBank, N.A. on the back. The envelope will include information on how to activate and use the card, the IRS said.

More batches of payments are expected on a weekly basis, according to the IRS.

"In addition, the IRS and the Bureau of the Fiscal Service leveraged data in their systems to convert many payments to direct deposits that otherwise would have been sent as paper checks or debit cards. This accelerated the disbursement of these payments by weeks," the IRS said.

If you are getting "Payment Status Not Available" from the IRS stimulus check tracker -- don't be alarmed.

According to the IRS, if you receive that message it can mean one of three things:

The agency said it will continue to issue the 2021 Economic Impact Payments throughout 2021.

When will SSI get their third stimulus check?

A date has yet to be set for when those receiving Social Security and other federal beneficiaries will get their money. Though the IRS has said those recipients will generally receive the third payment the same way as their regular benefits.

The IRS said if someone did not file a tax return and they receive SSA, RRB, SSI or VA benefits and their benefits are currently deposited to a Direct Express card, then the 2021 Economic Impact Payment will be deposited to that card.

The House Ways and Means Committee sent a letter to Rettig Monday expressing concern over the delay and asked the IRS to provide an update by Friday.

"Some of our most vulnerable seniors and persons with disabilities, including veterans who served our country with honor, are unable to pay for basic necessities while they wait for their overdue payments," the committee wrote.

Am I eligible for the third stimulus check?

The American Rescue Plan provides households with $1,400 for each adult, child and adult dependent, such as college students or elderly relatives.

A qualifying family of four would receive $5,600.

Do college students, adult dependents get the third stimulus check?

Unlike the first and second rounds of checks, payments for dependents in the third round are not restricted to only children under 17.

According to the IRS website: "Eligible families will get a payment based on all of their qualifying dependents claimed on their return, including older relatives like college students, adults with disabilities, parents and grandparents."

Now it's important to note that if you're a dependent, the check won't go to you, it'll go to whoever claims you as a dependent.

Can the $1,400 checks be seized by banks or creditors?

It depends on the type of debt that you have and who would be attempting to collect it. Like the previous rounds of stimulus checks, this aid can NOT be garnished by the federal government or the IRS. But it could be potentially garnished from private companies.