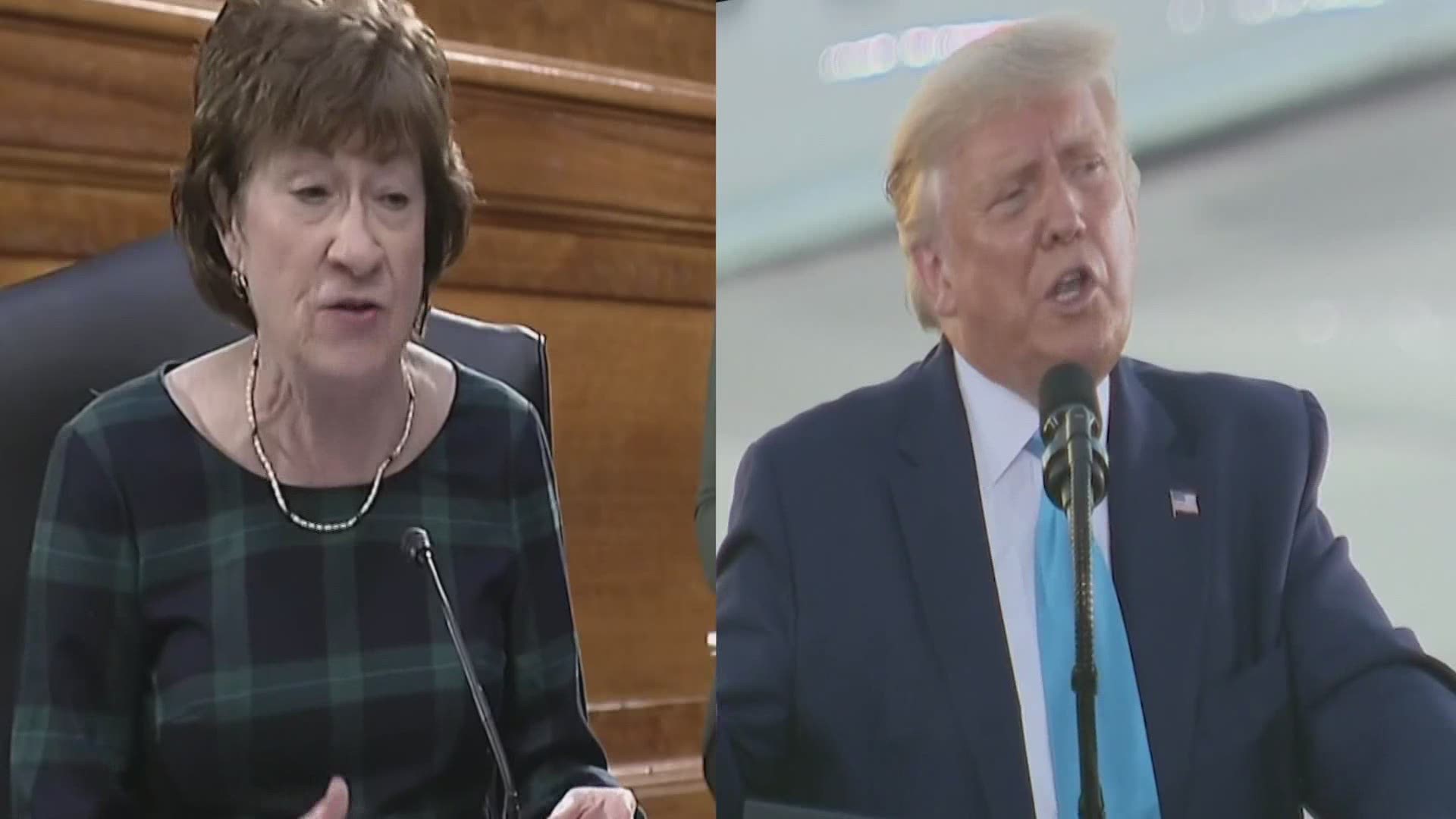 WASHINGTON — It's so on brand for Sen. Susan Collins to be in a pressure cooker over how she'll vote in a showdown riveting the nation.

This time, it's unclear how the battle over President Donald Trump’s effort to replace the late Justice Ruth Bader Ginsburg on the Supreme Court will affect the Maine Republican's bid for a fifth term. It comes six weeks from an Election Day when Trump might lose and Democrats could win Senate control, and it’s further complicating perhaps her toughest reelection race.

A day after Ginsburg, 87, succumbed to cancer, Collins said Saturday that Ginsburg's replacement should be nominated “by the President who is elected on November 3rd.” She said the Senate shouldn’t vote until after the election.

She told reporters Tuesday she'd oppose any Trump pick if the vote occurs before Election Day, not because of the nominee but out of fairness.

“I now think we need to play by the same set of rules," Collins said.

Alaska Sen. Lisa Murkowski has said she's against voting on a nominee before the election, but opposition by her and Collins isn't enough to derail a nomination in the Republican-run chamber.

For Collins, 67, a no vote could risk support she'll need in her reelection from conservative Republicans demanding fealty to Trump. At the same time, she can't afford to alienate independents and cross-over Democrats who value moderation.

If the Senate's Supreme Court vote occurs before Election Day, Collins’ position will be magnified as an issue in her race. Even if it doesn't, her stance will be high on voters' minds.

“It ties her into a pretzel,” said Dan Eberhart, a major GOP donor to Trump and Senate candidates, though not directly to Collins. “She needs the base, but she also needs the center or she will lose.”

Trump plans to announce his selection Saturday. McConnell, R-Ky., has said the Senate will vote this year but hasn't specified when.

RELATED: VERIFY: No, 4 GOP senators have not confirmed they won't vote on new Supreme Court justice until January

It might also focus progressives on how abortion rights and President Barack Obama's health care law could be threatened by a conservative-dominated Supreme Court. The justices plan to hear arguments on a GOP effort to annul the health care law the week after Election Day.

Collins' Democratic opponent, Sara Gideon, began airing a TV ad Tuesday saying “our children and our grandchildren” will be affected by Trump judicial nominees the McConnell-led Senate is rubber-stamping.

“We have to change the people who make him majority leader. That includes Sen. Susan Collins,” Gideon says.

“People don’t know what she stands for,” said Lauren Passalacqua, spokeswoman for the Democratic Senatorial Campaign Committee, the party’s Senate political arm. She also cited Collins' refusal to say if she’ll vote this year for Trump, with whom she's had a fraught relationship.

“Our state and our country need problem solvers,” said Michael Thibodeau, a Republican and former state Senate president. “People who can compromise and see value in others’ ideas and are not driven solely by the most partisan aspects of politics.”

“Senator Collins always does what she thinks is right for Maine and America, no matter which political party is in power,” said Annie Clark, a Collins campaign spokesperson.

Polling illustrates the perils that Trump poses for Collins, one of the most vulnerable GOP senators facing reelection this year.

The poll also showed Collins slightly trailing or even with her Gideon, underscoring that Collins can ill afford to lose support over the court fight.

In a further problem for Collins, Maine's political ground is shifting. State records show nearly 387,000 Democrats in July and 340,000 “unenrolled” independents, giving Democrats the largest voting block for the first time since at least the 1980s, according to Maine Secretary of State Matthew Dunlap. Republicans trail both groups.

But Democrats have complained that despite her penchant for publicly agonizing over difficult issues, she too often follows the GOP line when her vote is needed.

In a deal-breaker for Democrats and many #MeToo movement supporters, Collins cast a pivotal vote for Kavanaugh to fill a Supreme Court vacancy in 2018, despite accusations that he’d committed sexual assault while in high school. Kavanaugh denied the allegations.

Collins didn’t support Trump during the 2016 election because of his “constant stream of denigrating comments." Asked Monday on TV's “Fox and Friends” about Collins’ distancing over the court vacancy, Trump said: “I think that Susan Collins is going to be hurt very badly.”

Both sides have so far spent or allocated $97 million on the Collins-Gideon race, with Democrats having a modest edge, according to the ad tracking company Kantar/CMAG.

In a sign of conservatives' ambivalence, the Club for Growth hasn't endorsed Collins but is collecting contributions for her that may total $200,000, said the conservative group's president, David McIntosh. He said Collins' remarks indicate “she's open” to backing a Trump pick and added, “It's an important race for keeping the majority."