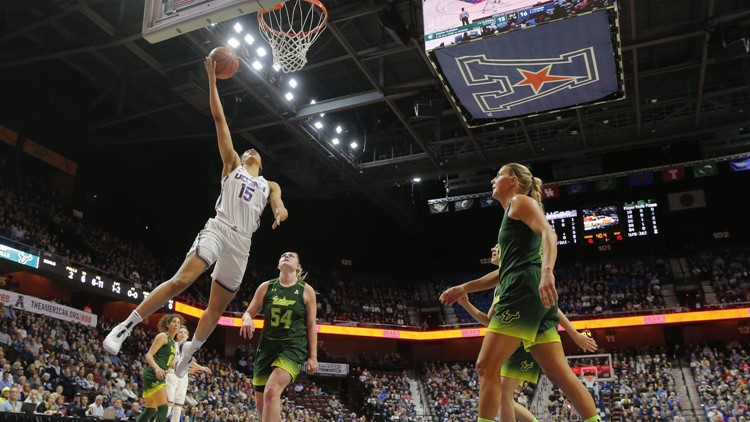 Photo by: David Butler II-USA TODAY Sports
Connecticut Huskies forward Gabby Williams (15) drives the ball to the basket against the South Florida Bulls in the first half during the championship game of the women's AAC Conference Tournament at Mohegan Sun Arena.

NCAA women's tournament: Once again, they are chasing UConn

The women’s college basketball world is facing a familiar challenge in the NCAA tournament: Keep UConn, the overall No. 1 seed, from going home with the trophy for the fifth time in six years.

Since the Huskies saw their 111-game win streak end thanks to an unforgettable finish from Mississippi State guard Morgan William in the 2017 Final Four, the Huskies have unsurprisingly resumed dominating the sport. They finished the 2017-18 regular season undefeated, winning all but two games by double-digit margins.

The numbers throughout the season, as they often are with the Huskies, were staggering. One example: In the semifinals of the American Athletic Conference tournament, they held Cincinnati to five points in the first half. Five players average more than 10 points a game, led by Katie Lou Samuelson’s 17.9 points a game and have outscored opponents by an average margin of 36.9 points a game.

But, that doesn’t mean they have perfectly smooth sailing.

UConn faces St. Francis (Pa.) in the first round of the tournament, but will likely have to face defending champion South Carolina in the Elite Eight. Notre Dame, Louisville and Mississippi State were also awarded one-seeds.

Muffet McGraw and Notre Dame are no strangers to success in the NCAA tournament — she’s made five trips to the NCAA title game in her career and seven to the Final Four. But this year, the 2018 USA TODAY Women’s Basketball Coach of the Year has been doing it with a rotation that’s been limited to six or seven players in tight games after four players were lost to knee injuries this season — making them perhaps the only one seed to have a strong underdog story.

“We kept losing people during the year, but we never put our heads down or felt sorry for ourselves. They just came to work every single day. This was the most rewarding championship I think we’ve had,” McGraw said last month.

Louisville, which finished third in the USA TODAY Coaches Poll, beat Notre Dame for the ACC Tournament title this month. Led by junior guard Asia Durr and senior forward Myisha Hines-Allen, they’ve outscored opponents by an average of 19.7 points this season with four players putting up more than 8 points per game.

After slaying the dragon in the Final Four, Mississippi State had a perfect season — until losing to South Carolina (again) in the SEC tournament championship. Senior guard Victoria Vivians leads the Bulldogs with 19.6 points per game.

The defending champion Gamecocks were victims of the injury bug this season — they lost guards Lindsey Spann and Bianca Cuevas-Moore to season-ending knee injuries — and dropped games against Louisville, Mississippi State, UConn, Tennessee and Missouri. A good sign for Dawn Staley’s crew: They won the SEC tournament earlier this month. A bad sign: Their corner of the bracket (they’re a two-seed) includes UConn.

Other teams to watch:

- Oregon made a Cinderella run through to the Elite Eight in 2017 before falling to the Huskies. But this year, a deep run shouldn’t be considered a big surprise for the two-seed. Sabrina Ionescu scored 36 points to lead her team to dethrone Stanford for the Pac 12 tournament title.

- Two-seed Baylor lost senior point guard Kristy Wallace to an ACL injury on Senior Night but freshman Alexis Morris stepped in and they beat Texas for the Big 12 tournament title.