Somber Congress, many in masks, pass almost $500B more in coronavirus aid

A nearly $500 billion measure helping businesses and hospitals cope with the coronavirus’ devastation has passed the House, and now goes to Trump for his signature. 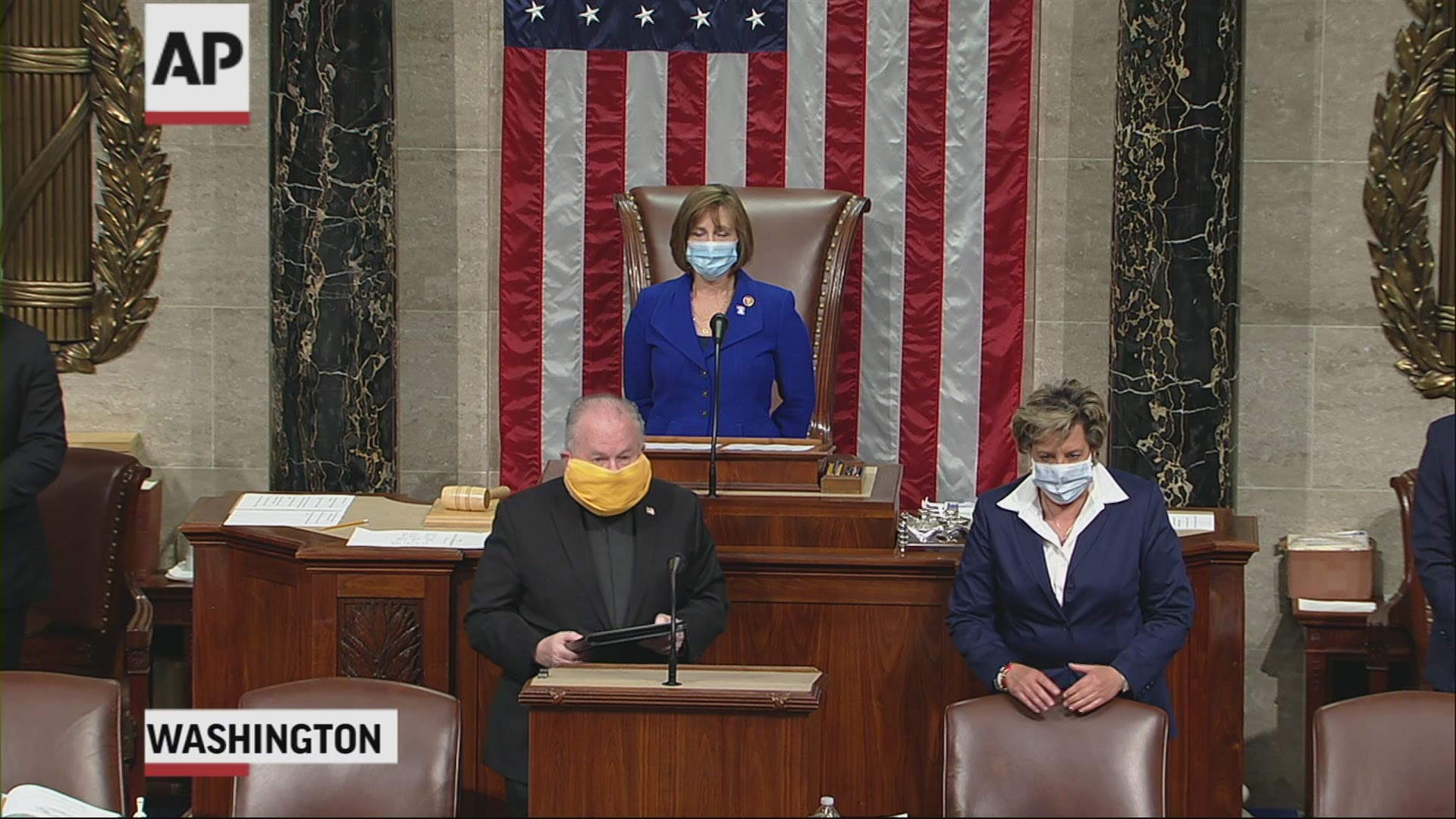 WASHINGTON — Congress delivered a nearly $500 billion infusion of coronavirus spending Thursday, rushing new relief to employers and hospitals buckling under the strain of a pandemic that has claimed almost 50,000 American lives and one in six U.S. jobs.

The measure passed almost unanimously, but the lopsided tally belies a potentially bumpier path ahead as battle lines are being formed for much more ambitious future legislation that may prove far more difficult to maneuver through Congress.

President Donald Trump is scheduled to sign the bill during a White House ceremony Friday.

The bipartisan measure passed as lawmakers gathered in Washington as a group for the first time since March 27, adopting stricter social distancing rules while seeking to prove they can do their work despite the COVID-19 crisis.

Lawmakers’ face masks and bandannas added an somber tone to their effort to aid a nation staggered by the health crisis and devastating economic costs of the pandemic.

“Millions of people out of work,” said House Speaker Nancy Pelosi, D-Calif. “This is really a very, very, very sad day. We come to the floor with nearly 50,000 deaths, a huge number of people impacted, and the uncertainty of it all. We hope to soon get to a recovery phase. But right now we’re still in mitigation.”

Anchoring the bill is the Trump administration’s $250 billion funding request to replenish a fund to help small- and medium-size businesses with payroll, rent and other expenses. The payroll program provides forgivable loans so businesses can continue paying workers while forced to stay closed for social distancing and stay-at-home orders.

It also contains $100 billion demanded by Democrats for hospitals and a nationwide testing program, along with a $60 billion set-aside for small banks and an alternative network of community development banks that focus on development in urban neighborhoods and rural areas ignored by many lenders. There’s also $60 billion for small-business loans and grants delivered through the Small Business Administration’s existing disaster aid program.

Trump celebrated the bill’s passage at his daily White House briefing Thursday. “At a time when many Americans are enduring significant economic challenges, this bill will help small businesses to keep millions of workers on the payroll,” he said.

The 388-5 vote — with Rep. Justin Amash, I-Mich., voting “present” — came at the end of a nettlesome path to passage. Republicans sought immediate action on Trump’s “clean” request for the small business money — backed by powerful, GOP-leaning business groups — but Democrats demanded equal funding for their priorities, frustrating Republicans who accused them of seeking leverage during the crisis. Republicans said delays in replenishing the paycheck subsidy program probably pushed some struggling businesses over the edge into closure.

Signs of the pandemic were everywhere in the House chamber Thursday. As Pelosi spoke from the floor, she lowered a white scarf that had covered much of her face. House Chaplain Patrick Conroy delivered the opening prayer wearing a yellow protective mask, and most lawmakers and aides on the chamber’s sparsely populated floor wore masks as well.

With the entire Capitol closed to the public, visitors’ galleries were set aside for lawmakers in an effort to separate them.

Passage of more coronavirus relief is likely in the weeks ahead. Supporters are already warning that the business-backed Payroll Protection Program will exhaust the new $250 billion almost immediately. Launched just weeks ago, the program quickly reached its lending limit after approving nearly 1.7 million loans. That left thousands of small businesses in limbo as they sought help.

Pelosi and allies like Ways and Means Committee Chairman Richard Neal, D-Mass., said the next measure will distribute more relief to individuals, extend more generous jobless benefits into the fall, provide another round of direct payments to most people and help those who are laid off afford health insurance through COBRA.

Democrats tried to win another round of funding for state and local governments in Thursday’s bill but were rebuffed by Senate Majority Leader Mitch McConnell, R-Ky., who says he’s going to try pump the brakes on runaway deficit spending. McConnell says he doesn't want to bail out Democratic-governed states for fiscal problems that predated the pandemic, but there's plenty of demand for state fiscal relief among Republicans, too.

After the Senate passed the latest bill Tuesday, McConnell declared that Republicans would entertain no more coronavirus rescue legislation until the Senate returns to Washington, promising rank-and-file Republicans greater say in the future legislation, rather than leaving it in the hands of top bipartisan leaders.

Pelosi attacked McConnell for at first opposing adding any money to his original $250 billion package and saying cash-strapped states should be allowed to declare bankruptcy, a move that they currently cannot do and that would threaten a broad range of state services. McConnell’s comments provoked an outcry — including from GOP governors — and he later tempered his remarks.

“Oh, really?” Pelosi said. “What made you think that was a good idea?”

Thursday's measure brings total rescue funding over the four measures, as measured by the cumulative deficit impact of spending proposals and tax cuts, to $2.4 trillion, according to the Congressional Budget Office.

Each day brings new evidence of the economic calamity wrought by the virus. Thursday morning the government reported that 4.4 million people filed for unemployment benefits last week as layoffs sweep the economy. Over the last five weeks, roughly 26 million people have filed for jobless aid, or about one in six U.S. workers.

The state of Michigan announced this week that it is temporarily laying off almost 3,000 workers.

All told, the four coronavirus relief bills crafted by Congress would deliver at least $2.4 trillion for business relief, testing and treatment, and direct payments to individuals and the unemployed, according to the Congressional Budget Office. The deficit is virtually certain to breach $3 trillion this year and is likely to go well above that when CBO issues new data as early as Friday.

Among the candidates for aid in the next bill is the Postal Service, which has more than 600,000 workers but is getting clobbered by COVID-19-related revenue losses.

In related matter, the House used a party-line 212-182 vote Thursday to establish a special committee to oversee how the Trump administration spends the huge sums of money Congress is providing to battle the coronavirus. Republicans accused Democrats of playing politics with the crisis, but Democrats said Congress needs to keep an eye on the effort.

RELATED: When will stimulus checks be mailed? What to know if you're still waiting

Credit: AP
In this image from video, Rep. Jim McGovern, D-Mass., speaks on the floor of the House of Representatives at the U.S. Capitol in Washington, Thursday, April 23, 2020. (House Television via AP)