The body of former President George H.W. Bush has arrived at the U.S. Capitol, where he will lie in state. 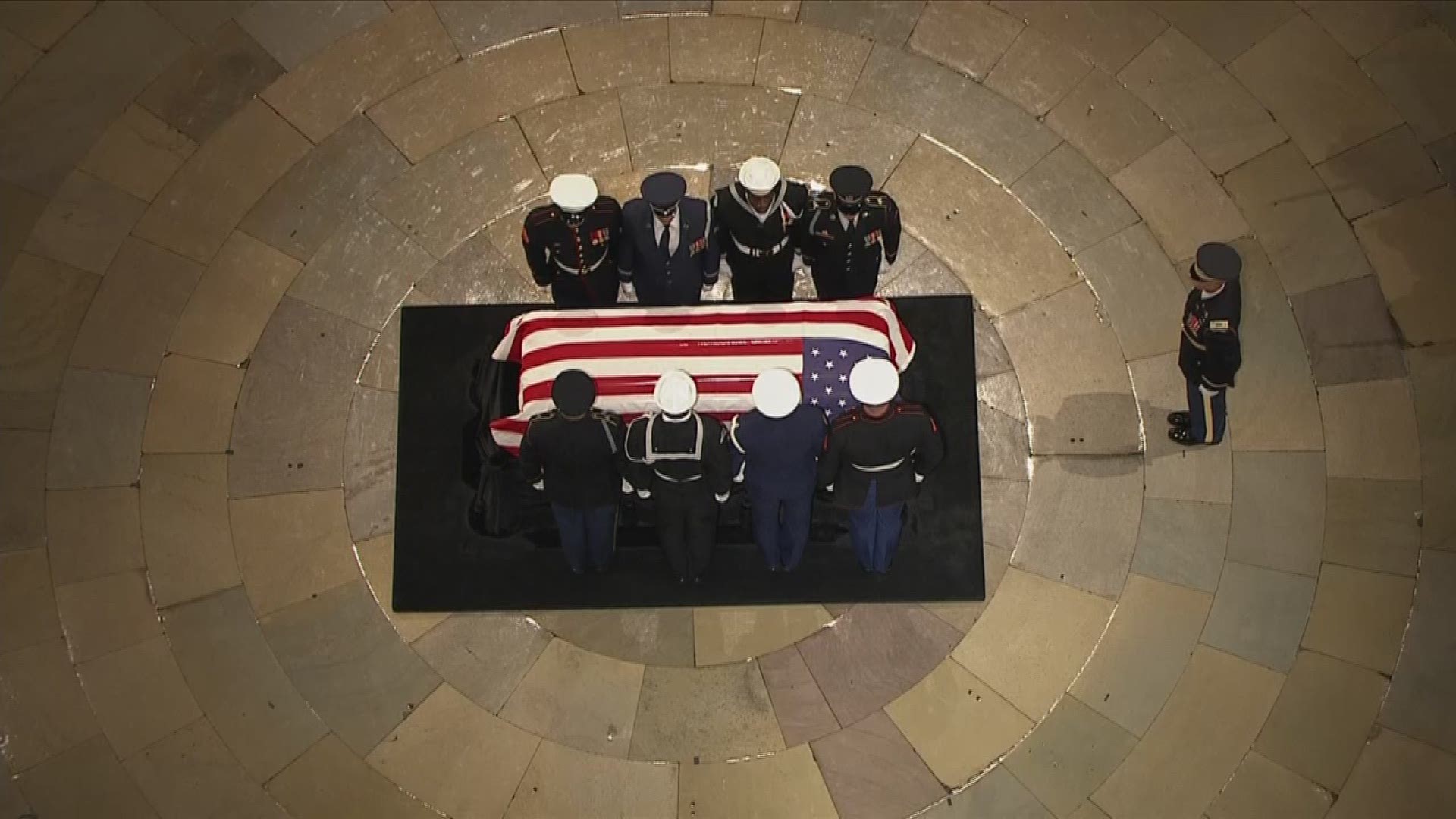 WASHINGTON (AP) — The nation's capital embraced George H.W. Bush in death Monday with solemn ceremony and high tributes to his service and decency, as the remains of the 41st president took their place in the Capitol rotunda for three days of mourning and praise by the political elite and everyday citizens alike.

With Bush's casket atop the Lincoln Catafalque, first used for Abraham Lincoln's 1865 funeral, dignitaries came forward to honor the Texan whose efforts for his country extended three quarters of a century from World War II through his final years as an advocate for volunteerism and relief for people displaced by natural disaster.

In an invocation opening Monday evening's ceremony, the U.S. House chaplain, the Rev. Patrick J Conroy, praised Bush's commitment to public service, from Navy pilot to congressman, U.N. ambassador, envoy to China and then CIA director before being elected vice president and then president.

Vice President Mike Pence and Republican Senate leader Mitch McConnell also spoke. President Donald Trump did not attend, but he and first lady Melania Trump came to the Capitol later Monday to pay tribute. They stood in front of the casket with their eyes closed for a few moments, before Trump saluted the casket. 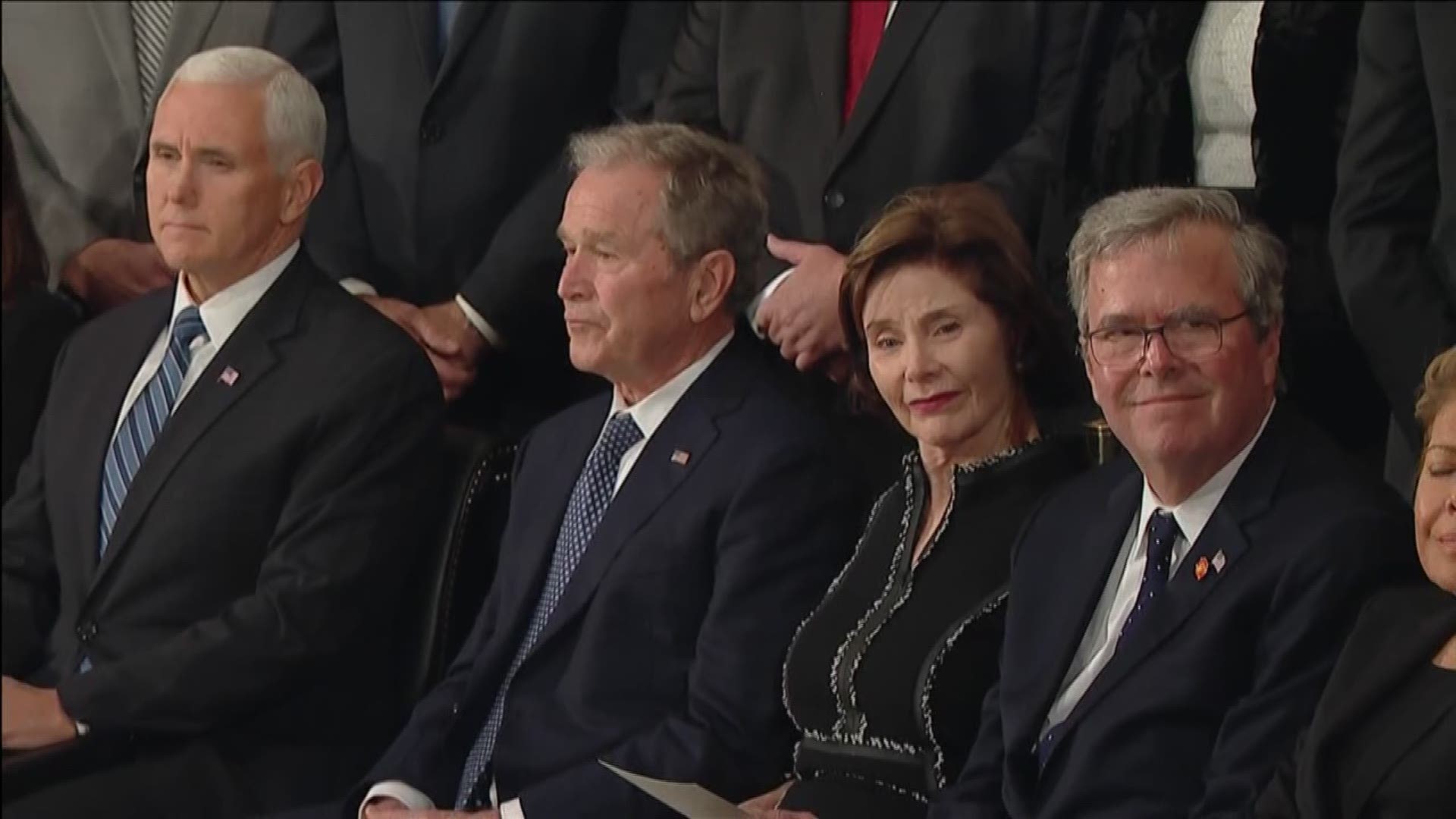 Political combatants set aside their fights to honor a Republican who led in a less toxic era and at times found commonality with Democrats despite sharp policy disagreements. Democratic Rep. Nancy Pelosi, past and incoming House speaker, exchanged a warm hug with George W. Bush and came away dabbing her face. Bush himself seemed to be holding back tears.

Pelosi and Chuck Schumer, the Senate Democratic leader, placed wreaths in the short ceremony before the rotunda was to be opened to the public. It was to remain open overnight.

Sent off from Texas with a 21-gun salute, Bush's casket was carried to Joint Base Andrews outside the capital city aboard an aircraft that often serves as Air Force One and designated "Special Air Mission 41" in honor of Bush's place on the chronological list of presidents. His eldest son, former President George W. Bush, and others from the family traveled on the flight from Houston.

Cannon fire roared again outside the Capitol as the sun sank and the younger President Bush stood with his hand over his heart, watching the casket's procession up the steps.

Bush was remembered just feet away from what he called "Democracy's front porch," the west-facing steps of the Capitol where he was sworn in as president.

He will lie in state in the Capitol for public visitation through Wednesday. An invitation-only funeral service, which the Trumps will attend, is set for Wednesday at Washington National Cathedral.

Although Bush's funeral services are suffused with the flourishes accorded presidents, by his choice they will not include a formal funeral procession through downtown Washington. 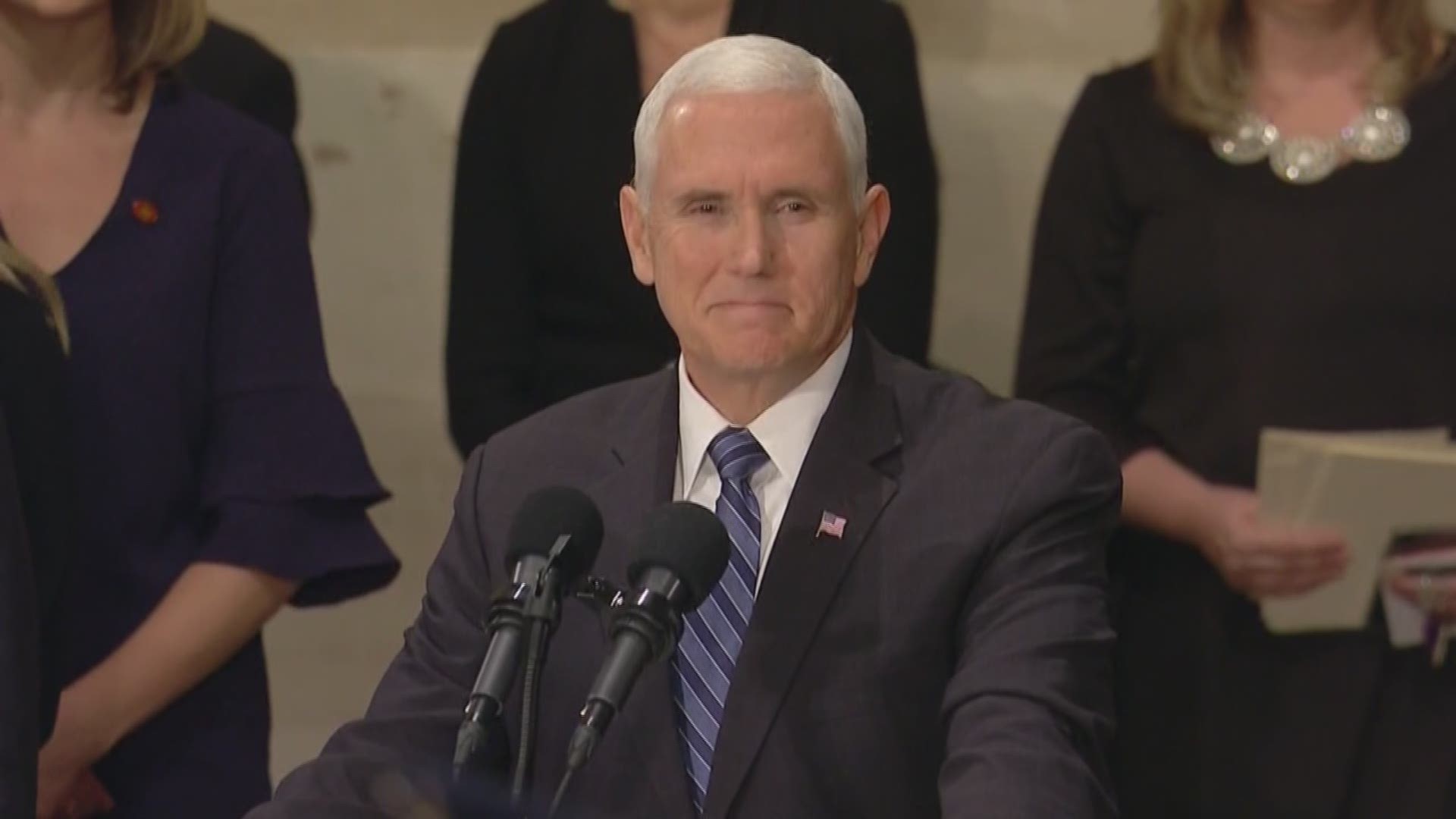 On Sunday, students, staff and visitors had flocked to Bush's presidential library on the campus of Texas A&M University, with thousands of mourners paying their respects at a weekend candlelight vigil at a nearby pond and others contributing to growing flower memorials at Bush statues at both the library and a park in downtown Houston.

"I think he was one of the kindest, most generous men," said Marge Frazier, who visited the downtown statue Sunday while showing friends from California around.

After services in Washington, Bush will be returned to Houston to lie in repose at St. Martin's Episcopal Church before burial Thursday at his family plot on the library grounds. His final resting place will be alongside Barbara Bush, his wife of 73 years who died in April, and Robin Bush, the daughter they lost to leukemia in 1953 at age 3.

Trump has ordered the federal government closed Wednesday for a national day of mourning. Flags on public buildings are flying at half-staff for 30 days.

Bush's passing puts him back in the Washington spotlight after more than two decades living the relatively low-key life of a former president. His death also reduces membership in the ex-presidents' club to four: Jimmy Carter, Bill Clinton, George W. Bush and Barack Obama.

One of Bush's major achievements was assembling the international military coalition that liberated the tiny, oil-rich nation of Kuwait from invading neighbor Iraq in 1991. The war lasted just 100 hours. He also presided over the end of the Cold War between the United States and the former Soviet Union.

A humble hero of World War II, Bush was just 20 when he survived being shot down during a bombing run over a Japanese island. He had joined the Navy when he turned 18.

Shortly before leaving the service, he married his 19-year-old sweetheart, Barbara Pierce, and forged the longest presidential marriage in U.S. history. Bush enrolled at Yale University after military service, becoming a scholar-athlete and captaining the baseball team to two College World Series before graduating Phi Beta Kappa after just 2½ years.

After moving to Texas to work in the oil business, Bush turned his attention to politics in the 1960s. He was elected to the first of two terms in Congress in 1967. He would go on to serve as ambassador to the United Nations and China, head of the CIA and chairman of the Republican National Committee before being elected to two terms as Ronald Reagan's vice president.

Soon after he reached the height of his political popularity following the liberation of Kuwait, with public approval ratings that are the envy of today's politicians, the U.S. economy began to sour and voters began to believe that Bush, never a great communicator — something even he acknowledged — was out of touch with ordinary people.

He was denied a second term by Arkansas Gov. Clinton, who would later become a close friend. The pair worked together to raise tens of millions of dollars for victims of a 2004 Indian Ocean tsunami and of Hurricane Katrina, which swamped New Orleans and the Gulf Coast in 2005.

"Who would have thought that I would be working with Bill Clinton of all people?" he joked in 2005.

In a recent essay, Clinton declared of Bush: "I just loved him."

1 / 47
Pool
The casket carrying the remains of George H.W. Bush has arrived at the U.S. Capitol for the nation to begin its formal farewell to the 41st president.