Ocasio-Cortez gave specifics of a moment during the riot when she thought she would die, and explained why she can't simply "move on" from that trauma. 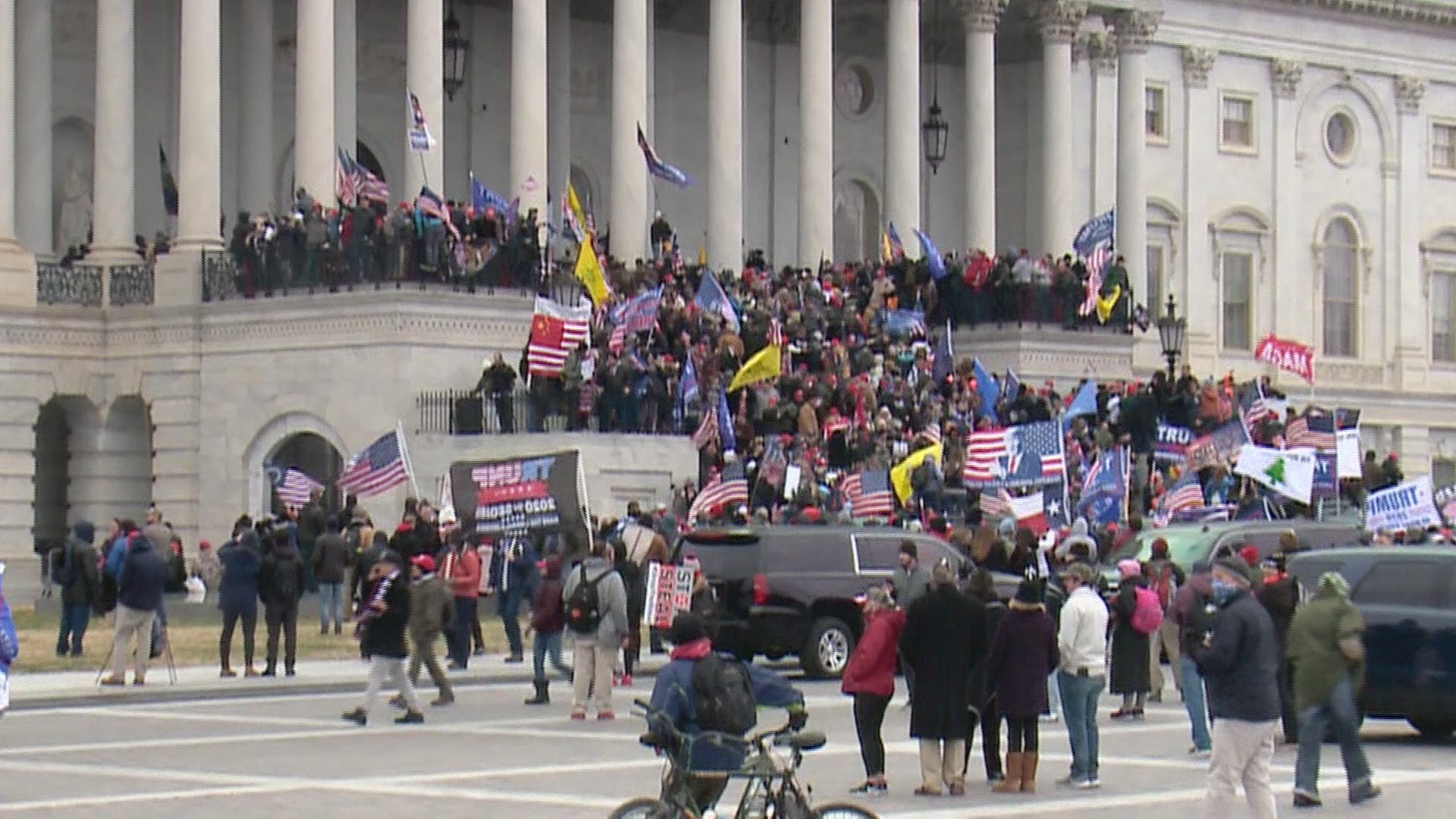 NEW YORK — A teary-eyed Rep. Alexandria Ocasio-Cortez, D-N.Y., on Monday recounted hiding in her office bathroom as a man repeatedly yelled “Where is she?" during the insurrection at the U.S. Capitol, and also revealed a sexual assault in her past as she talked about trauma.

The remembered terror of the day made Ocasio-Cortez get emotional as she spoke during an Instagram live video, and she chastised those she said wanted Americans to put the day behind them and not recognize the lingering impact of such an event.

“These folks who tell us to move on, that it’s not a big deal, that we should forget what’s happened, or even telling us to apologize, these are the same tactics of abusers," she said.

.@AOC is on IG live discussing the Capitol insurrection and being a survivor of sexual violence and how trauma compounds is incredible.

I don’t care what party you’re apart of: this is powerful and brave. (H/t @ryepastrami) pic.twitter.com/8nGOEQtkEq

RELATED: Officer killed in Jan. 6 riot will lie in honor at US Capitol

Ocasio-Cortez said the atmosphere around the Capitol and Washington had started to feel more tense and volatile in the days before the insurrection.

The second-term congresswoman explained that on that Monday, a group of supporters of former President Donald Trump heckled her outside the Capitol. The next day, she said she saw bigger crowds gathering and she decided to remove her congressional pin to be less noticeable.

Then came Jan. 6, the day of the riot by Trump supporters. Congress was meeting to certify President Joe Biden's victory, which is normally more ceremony than anything else. But Trump's weeks of unproven election fraud claims -- debunked by multiple state elections officials, the former head of the federal Cybersecurity and Infrastructure Security Agency and former Attorney General William Barr -- combined with the rally where Trump riled up supporters shortly before the riot and the objections of a large portion of Republicans in the House and Senate, changed that.

Ocasio-Cortez said she was alone in her office with a staffer when someone started banging on the door. The staffer told her to hide. “I start to hear these yells of ‘Where is she? Where is she?’ and I just thought to myself, they got inside," she said.

AOC recounting her horrifying experience hiding in her office during the insurrection.

“I thought I was going to die...I have never been quieter in my entire life.” pic.twitter.com/t2P6FU3mFU

Ocasio-Cortez demonstrated how she pressed her body up against the wall behind the open bathroom door, peeking through the hinges to see who was yelling for her. She said that moments after the man barged in, one of her staffers told her it was OK to come out since it was an officer. But even then, the congresswoman said something didn't feel right.

"Because he was looking at me with a tremendous amount of anger and hostility. And things weren't adding up. Like, there was no partner there and he wasn't yelling 'This is Capitol Police!" Ocasio-Cortez said. She admitted she may have seen something in the officer that wasn't there, but then said her staffer agreed that he wasn't sure what the officer's intentions were.

"The situation did not feel OK," Ocasio-Cortez said. She said the officer then ordered her to go to another building, which the congresswoman did not identify. She said nobody escorted her or her staff and that she later realized the officer only said to go to the street level, which is where Ocasio-Cortez said she could hear the rioters as the Capitol was about to be stormed.

“I’m fully expecting one of these insurrectionists to turn the corner with a gun and that it would be over,” Ocasio-Cortez said.

The congresswoman and her staffer made their way to the office of Rep. Katie Porter, D-Calif. They looked through Porter's staff's stash of extra workout clothes and found some items they could use to disguise themselves better and blend in if they had to. They also used furniture to barricade the door. They eventually made it to safety.

Thanks for making the space for me, and hope we can all make space for others to tell their stories in the weeks to come.

And to those who wish to paper over their misdeeds by rushing us to all “move on” - we can move on when the individuals responsible are held to account.

A 34-year-old Texas man was arrested last month for allegedly taking part in the riot and posting violent threats, including a call to assassinate Ocasio-Cortez. Garret Miller, who is from the Dallas suburb of Richardson, was named in a five-count federal complaint.

Ocasio-Cortez has not been afraid to talk about the experience of the riot nor to call out her colleagues. She told Sen. Ted Cruz, R-Texas, via Twitter last week that he "almost had me murdered." Cruz, who has condemned the rioters, was one of the senators who objected to elections results in Biden's victory.

Trump faces a Senate trial next week after the House impeached him for "incitement of insurrection.