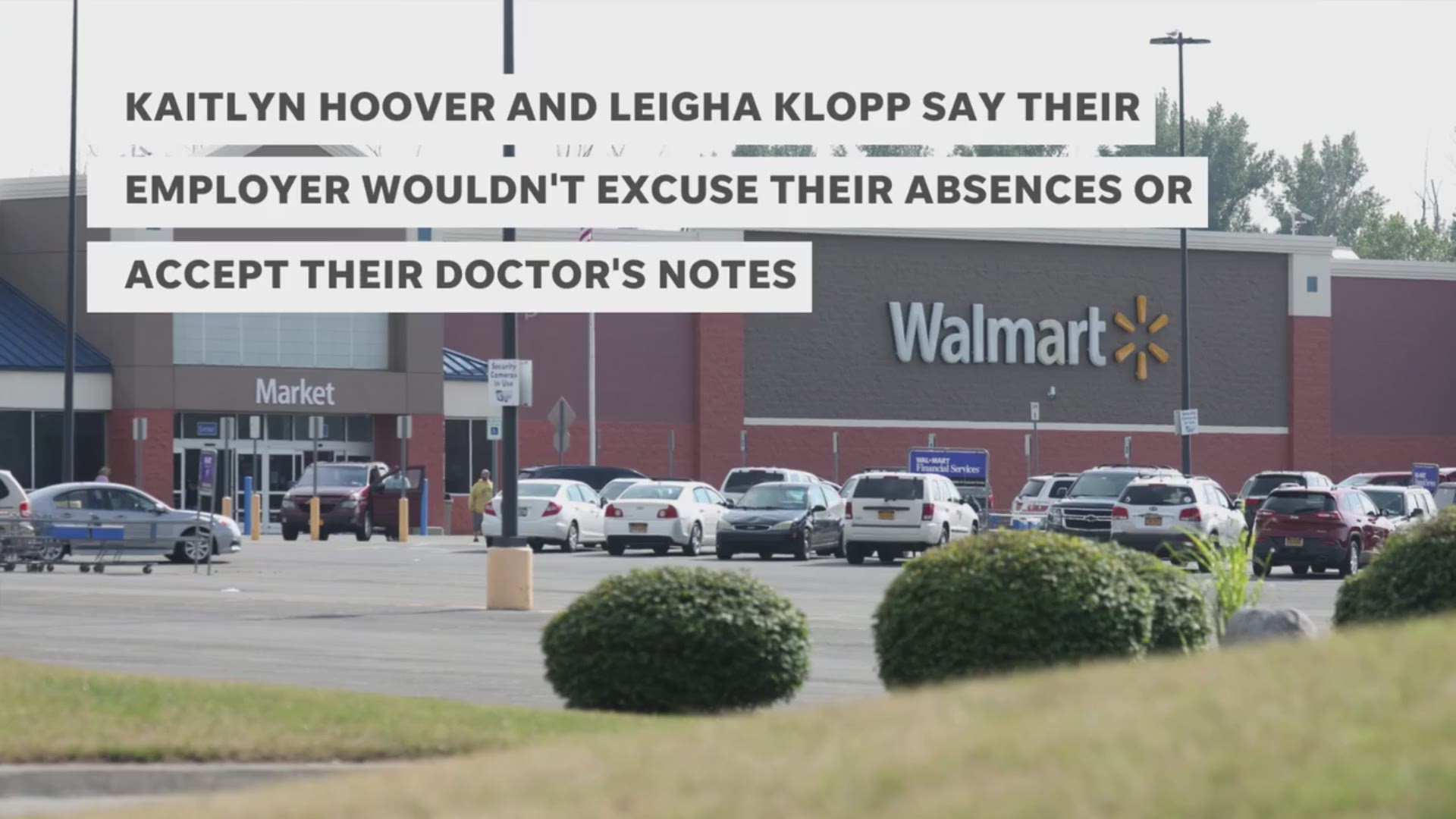 Credit: CARLOS ORTIZ/ROCHESTER DEMOCRAT AND CHRONICLE
Former Walmart employee Leigha Klopp, 21, of Medina, Orleans County, with her eleven-month-old son Oliver Kenward, at a park in Albion. Klopp is part of a lawsuit filed against the retailer alleging the company discriminates against pregnant women.

Your baby or your job?

That's the choice two Orleans County women allege they faced back in 2017 when they needed to take time off from their jobs at the Albion Walmart so they could seek medical attention for pregnancy-related illnesses.

Both ultimately picked their babies.

Former Walmart store associates Leigha Klopp and Kaitlyn Hoover last week filed a class-action lawsuit in state Supreme Court claiming the Arkansas-based company's absentee policy penalized them after they had to take time off for unscheduled pregnancy-related hospital visits, and violated their rights under state law.

More: Hey, boss: Moms get it done. Here's how to keep them around

Walmart's policy in particular "flouts New York's pregnancy accommodation law by punishing pregnant workers for lawful absences," said Dina Baskt, co-president and co-founder of worker advocacy group A Better Balance, which filed the suit July 24 on behalf of Klopp, Hoover and any other pregnant woman affected by what the suit claims is Walmart's policy in New York state. "No pregnant worker, many fearing miscarriage, should be fired for seeking emergency medical care," she added.

Credit: CARLOS ORTIZ/ROCHESTER DEMOCRAT AND CHRONICLE
Former Walmart employee Leigha Klopp, 21, of Medina, Orleans County, is part of a lawsuit filed against the retailer alleging the company discriminates against pregnant women. This is the Albion store.

At issue in the suit is New York's Pregnant Worker Fairness act, enacted in 2016, which requires employers to make "reasonable accommodations" for medical needs related to pregnancy unless such accommodations would create "undue hardship" on the employer. Those accommodations include providing limited time off or an altered schedule for medical visits.

This suit is the first class-action suit brought under the new law.

Baskt called on the company to "immediately change its policies to comply with this law and ensure that no pregnant worker is forced to choose between a healthy pregnancy and a pink slip."

More: Hospitals know how to protect mothers. They just aren’t doing it.

In an emailed statement on Thursday, Walmart spokesman Randy Hargrove disputed that company policies codify discrimination but said the company would look into the women's claims.

"We take these issues seriously and do not tolerate discrimination," he said. "Like any company, we have an attendance policy that helps ensure we are taking care of our customers. We understand associates may have to miss work on occasion and we have processes in place to assist them. This includes legally protected and authorized absences, such as medical-related accommodation, FMLA leave, pregnancy and bereavement that are not counted against our attendance policy."

A 2015 graduate of Albion High School, Leigha Klopp landed a job at Walmart in October 2016, making $9.75 per hour. She worked in the apparel department, typically folding and organizing clothing during her shifts and filling in at other departments on an as-needed basis.

Credit: CARLOS ORTIZ/ROCHESTER DEMOCRAT AND CHRONICLE
Former Walmart employee Leigha Klopp, 21, of Medina, Orleans County, with her eleven-month-old son Oliver Kenward, and the father Jakob Kenward, 22, at a park in Albion. Klopp is part of a lawsuit filed against the retailer alleging the company discriminates against pregnant women.

According to the lawsuit, Walmart's disciplinary policy at the time was that employees would accumulate so-called "points" each time they missed a scheduled shift, arrived late or left early without advance approval from a supervisor. Under the scheme, hourly employees like Klopp and Hoover would get one point for each full shift missed, and a half-point for each incomplete shift or tardiness.

If an employee accumulated four points during their first six months of employment, they could be fired. After probation, employees who accumulated nine points during any rolling six-month period were at risk of being fired, according to the court documents.

Although Klopp and fiancé Jakob Kenward hadn't been trying, it was a happy surprise when they learned she was pregnant in late December 2016.

"It was scary because it wasn't planned, but we were making the best of the situation," she said.

More: Avoiding discrimination: How to job hunt (and combat bias) while pregnant

On a Friday afternoon in mid-January 2017, while organizing her store's shoe department, Klopp was suddenly overcome by dizziness and started having cramps.

"It got to the point where I couldn't stand, I couldn't physically work, I was in tears," said Klopp. "I was terrified. I was scared something was wrong, and my first instinct was that I had to go to the hospital."

A coworker summoned her supervisor.

"I told the supervisor I was pregnant and having a lot of pain and cramps and I'm worried that I'm miscarrying," she said.

The manager told her to go, but said she'd be docked a half-point for leaving early.

She went to an area hospital, where doctors provided her intravenous fluids and anti-nausea medications and gave her a note putting her out of work for the next three days.

When she returned to work, according to the suit, managers refused to accept it and gave her a half-point for leaving early on Friday.

A few weeks later, Klopp said, she awoke nauseated, thinking she'd only throw up, and then go in to work.

"But when I vomited it was bloody, so I immediately called my OB/GYN and she said you have to go to the hospital," said Klopp. "I said, but I have to work or I'll get fired. And she said, 'It's not a question.' "

In her lawsuit, Klopp said when she called the Walmart store that morning to report that she was going to take her doctor's advice, the manager told her if she didn't make her shift that day, she'd have "too many points" and would be terminated.

More: What is preeclampsia? And does it still kill women in the US?

With a doctor's note in hand to excuse her absence, Klopp returned to Walmart a few days later for her next scheduled shift. But, she said, the bosses refused to take the document, walked her to the main office and fired her.

"They asked me to hand in my vest and my badge and to clean out my locker," she said. "It felt very unfair that I was being punished for something that wasn't in my control and that the employers just didn't care about me as a person, or my family or what I was going through."

According to the suit, if company officials had excused Klopp's pregnancy-related illnesses, she would not have been fired.

Circumstances were similar for Kaitlyn Hoover, who was fired in March 2017 after severe nausea, vomiting and dehydration in the early weeks of her pregnancy resulted in her missing work due to a brief hospitalization, according to the lawsuit.

When Hoover returned to her store for her next scheduled shift, she too was told her absence was not excusable, that the company doesn't accept doctor's notes and was summarily fired.

"I was devastated when Walmart fired me. I had a baby coming and all of a sudden I couldn't pay my bills," said Hoover in a written statement.  "I am bringing this lawsuit because what happened to me was wrong and I want to make sure that Walmart is held accountable so that other pregnant women won't be treated like I was."

Credit: CARLOS ORTIZ, CARLOS ORTIZ/ROCHESTER DEMOCRAT AND CHRONICLE
Former Walmart employee Leigha Klopp, 21, of Medina, Orleans County, is part of a lawsuit filed against the retailer alleging the company discriminates against pregnant women. This is the Albion store.

New York's pregnant worker protection act requires employers to make "reasonable accommodations" for medical needs related to pregnancy, unless it would create an undue hardship or if the employee cannot, with accommodation, perform the activities of her job in a reasonable manner. The law says an employer may request a health care provider's note to verify the existence of the pregnancy-related condition.

Examples of reasonable accommodations include: bathroom, food or drink breaks; allowing an employee to carry a water bottle; dress code flexibility; limits on lifting requirements; transfer to a less-strenuous shift, position or work location; limited time off or altered schedule for medical visits; and a reduced schedule.

The women's lawsuit alleges that when Walmart employees phone in to report an absence, "they are consistently told that absences for pregnancy-related conditions cannot be authorized and that they will incur points if they cannot appear for their scheduled shift."

More: Re-entering workforce? How to find a job after years of parental leave

More: Family leave: You may not realize this benefit doesn't kick in right away

They claim their managers never considered whether they should make accommodations for them even though time off to seek medical attention or recover from pregnancy-related conditions is "explicitly contemplated as a reasonable accommodation under the PWFA," according to the suit.

In October 2017, Walmart revised its policies to allow employees who are pregnant, breastfeeding or recovering from childbirth to ask for job adjustments, reasonable accommodations or a temporary transfer to a different position.

Walmart has 30 days to respond to the suit filed by Klopp and Hoover.

Across the country, Walmart is facing similar lawsuits and other legal actions. A federal judge recently denied the company's bid to dismiss a different class action suit filed that alleges the company refused to accommodate medically-imposed lifting restrictions for two pregnant employees in Illinois and Florida.

In June, Gov. Andrew M. Cuomo even directed the state Division of Human Rights to investigate past and present claims made against Walmart, Merck, Novartis and commodity traders Glencore.

"New York leads the nation in advancing equal rights, and these actions will build on our proud record to help ensure women have equal opportunities to succeed in the workplace," he said in a press release announcing the move. "Discrimination against those who are pregnant is illegal, and we will hold employers who violate the law fully accountable."

The state also launched a comprehensive education campaign to help inform pregnant woman of their rights under the law.

A state hotline is available to anyone who is pregnant or breastfeeding and believes their rights have been violated at (888) 392-3644.

Additionally, if you take leave due to a pregnancy or pregnancy-related condition, you have the right to return. Your employer may not require you to remain on leave until you give birth and they must hold your job for you as long as they do for employees who take leave for other reasons.