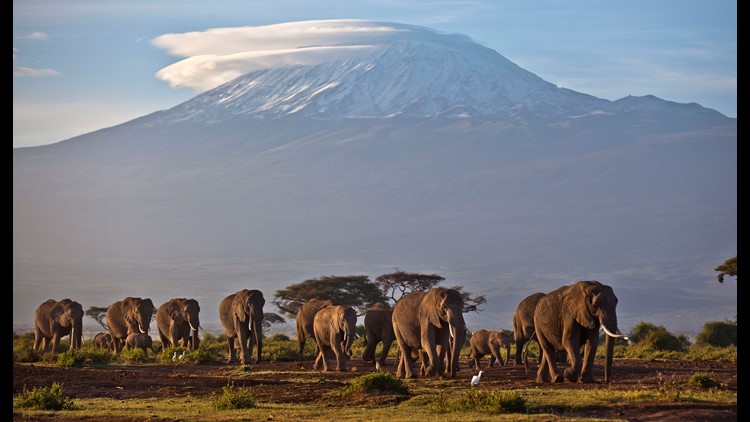 Photo by: Ben Curtis, AP
In this file photo, a herd of adult and baby elephants walks in the dawn light as the highest mountain in Africa Mount Kilimanjaro in Tanzania is seen in the background, in Amboseli National Park, southern Kenya. Elephants are one of a few megaherbivores still in existence

A new study disagrees with a longstanding view that humans wiped out large animals that previously occupied Africa.

In research published in the journal Science on Friday, authors analyzed records on megaherbivore communities in eastern Africa over seven million years. A megaherbivore is a mammal weighing more than 2,000 pounds. They concluded that extinctions of diverse mammal communities in Africa occurred before evidence of human hunting.

The animal decline might have instead been because of environmental factors such as declining atmospheric carbon dioxide and expansion of grasslands, researchers write.

"Low CO2 levels favor tropical grasses over trees, and as a consequence savannas became less woody and more open through time," John Rowan, a postdoctoral scientist from the University of Massachusetts Amherst who was involved in the research, said in a statement. "We know that many of the extinct megaherbivores fed on woody vegetation, so they seem to disappear alongside their food source."

Analysis suggests 28 lineages of megaherbivores went extinct, starting around 4.6 million years ago, according to lead author Tyler Faith, an assistant professor in the Department of Anthropology at the University of Utah. Today, only elephants, hippopotamuses, giraffes and white and black rhinoceroses exist.

More: Milu deer fighting its way out of extinction

University of Oxford, U.K., researchers cautioned that it isn't exactly clear when humans began affecting large animal populations, but there is strong evidence that human impact played a role in losses tens of thousands of years ago.

"The causes of megaherbivore decline are probably complex, multidimensional, and varied across time and space," René Bobe and Susana Carvalho wrote in the same issue of Science.