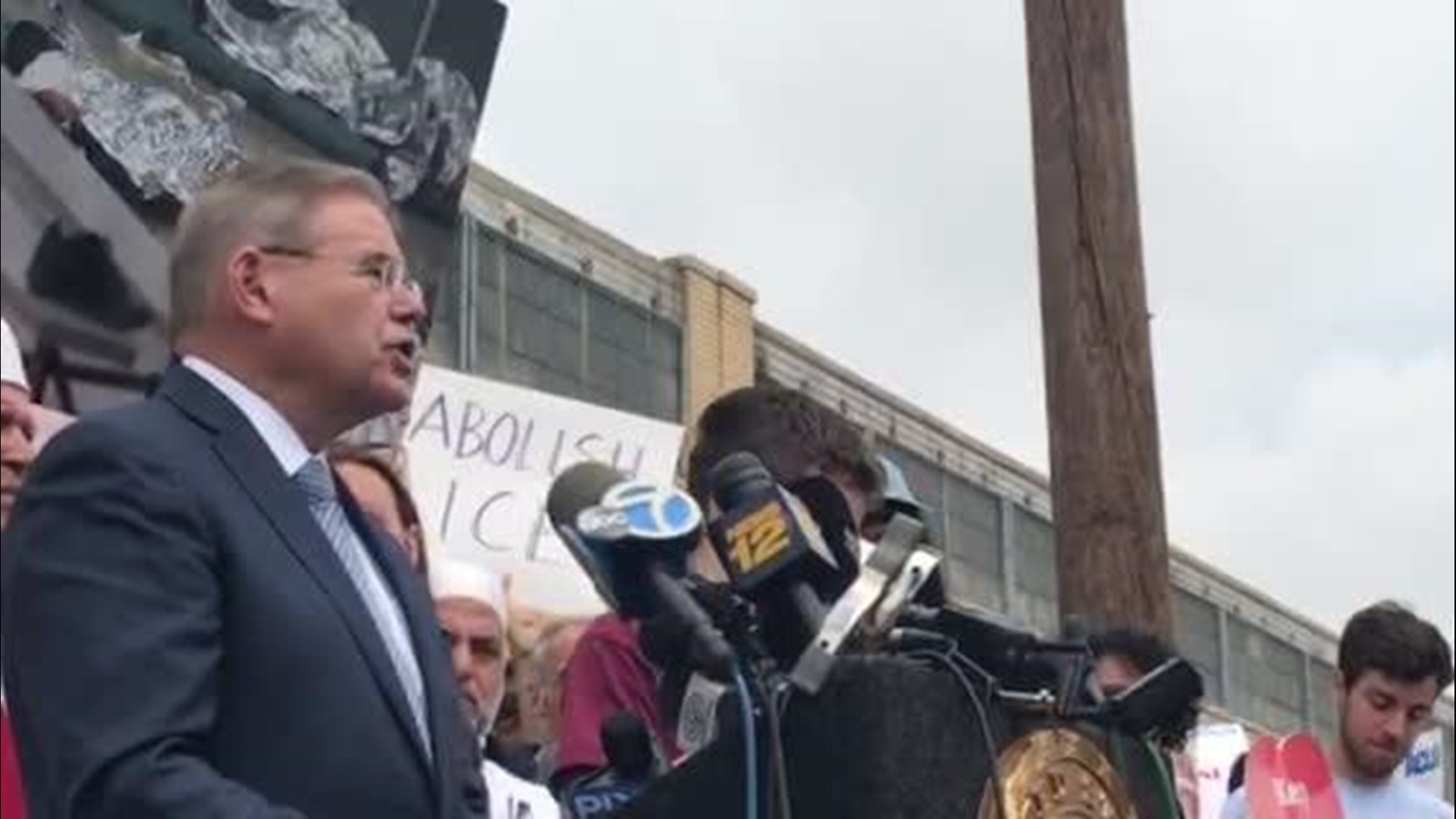 Credit: Courtesy of Ricardo de Anda
Hector Tejeda, center, poses for a picture with his daughters.

WOODLAND PARK, N.J. – When Hector Tejeda Santos told his pregnant wife and two young daughters to flee Honduras and meet him in the United States, he said he hoped they would find peace of mind in Texas.

Instead, he learned in June that his family was detained at the U.S.-Mexico border. His wife was taken to Port Isabel Detention Center in Los Fresnos, Texas, and his daughters, Serli, 5, and Cecia, 9, were shipped off to the Cayuga foster care center in the East Harlem neighborhood of New York City.

He's been trying to get his daughters released ever since.

"You can't imagine how much I've suffered," Santos, 32, who is in Galveston, Texas, said in a Spanish-language phone interview. "My daughters cry and cry. My wife is detained with a baby I'm not seeing grow."

Santos' wife and daughters were among the more than 2,000 families separated under the Trump administration's "zero-tolerance" policy, which called for the criminal prosecution of people who illegally crossed the Southwest border.

July 11: Who is Dana Sabraw? 5 things to know about judge who ordered reunification of immigrant families

The federal government scrambled to reunite dozens of families with children under age 5 by Tuesday to meet a deadline imposed by U.S. District Judge Dana Sabraw. The judge also ordered the government to reunite children ages 5 and up by July 26.

The government did not reunite all migrant children in that age bracket with their parents in time, despite Sabraw's insistence that the government must streamline its process to meet the deadlines and reunite the separated families.

Santos, who entered the country earlier this year with his oldest daughter, planned to travel to New York City with his lawyer, Ricardo de Anda, to pick up his daughters. But has an ankle monitor pending the results of his asylum petition and was told he couldn't leave the area without permission from Immigration and Customs Enforcement.

The agency did not grant him permission, de Anda said.

Santos' wife, Denise Santos, 30, was supposed to be released so she could be reunited with the girls at Cayuga, but de Anda said, Immigration and Customs Enforcement kept her detained without explanation.

Instead, de Anda and Michael Avenatti, a Los Angeles attorney best known for representing Stormy Daniels, the adult film star who has sued Trump over an alleged affair and $130,000 that she said she was paid to keep quiet about it, held a news conference Wednesday morning outside of Cayuga Centers in East Harlem to call for the reunification of the Santos family.

“This is not acceptable,” said Avenatti on Wednesday morning. “This is not our America. For months now, this cruel and unusual president has been holding children hostage in the name of politics.”

Immigration and Customs Enforcement has released other immigrant parents so they can be reunited with their children, according to the Associated Press. Those parents were outfitted with ankle bracelets while their cases are heard.

It is unclear whether Denise Santos is supposed to be released under those circumstances. An ICE spokeswoman declined to comment on her detainment and her separation from her daughters.

July 10: Feds say 34 immigrant children to be reunited with parents; no timetable for others

Avenatti said the chances of Denise Santos being released could be good, but “I’m seriously doubtful because of these draconian policies, because of how stringent they’re being enforced.”

Avenatti said several mothers he represents have been deported without their children.

Hector Tejeda Santos said he worries about his wife, who is four months pregnant. He said she doesn't get sunlight and has trouble sleeping. Denise Santos recently had a fever and received no medical attention, he said.

"I don't know what's happening with this government because that's not the kind of life for a pregnant woman," he said.

Hector Tejeda Santos and his wife raised their family in Olancho, a department on the eastern side of Honduras.

He and his lawyer declined to discuss why his family left and applied for asylum, but his family's move comes as countless Hondurans flee the country over gang violence terrorizing their neighborhoods.

The U.S. State Department considers Honduras a high-risk area because of violent crime, according to a Jan. 10 travel advisory.

Hector Tejeda Santos and his daughter Karen, 14, came to the United States in January and stayed in Galveston. Karen started taking English as a Second Language and plans to start ninth grade in the fall. He said she wants to study medicine and become a doctor.

Hector Tejeda Santos said he also hoped to enroll his younger daughters in school and support his wife through her pregnancy.

"I want them to have a normal life. I want my daughters to have a place where they can study, where I can buy them new shoes and clothes," he said, "a place safe from whatever dangers we used to face."

Despite the Trump administration's crackdown on illegal immigration, Hector Tejeda Santos said he didn't expect his family to get split up while seeking asylum.

"I want the federal government to know we're human beings," he said. "They should understand because they're mothers and fathers, too."

July 6: Trump administration says it may not meet deadline to reunite separated families