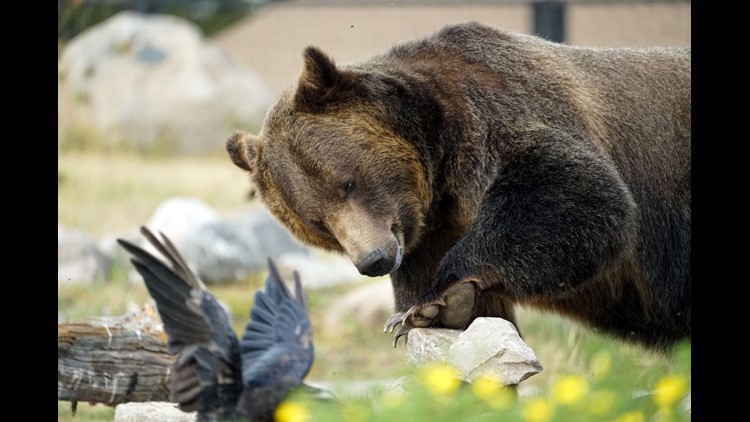 Photo by: Trevor Hughes, USA TODAY
A grizzly bear living at the Grizzly & Wolf Discovery Center in West Yellowstone, Montana, explores its enclosure. Animals living in the discovery center were either rescued from the wild while young or injured, or faced euthanization because they posed a danger to humans.

Wyoming wildlife officials say we may never know why a grizzly bear and her cub killed a hunting guide in an unusual and unprovoked attack in the wilderness near Yellowstone National Park.

Authorities on Thursday formally closed the investigation after forensic testing confirmed the two bears, which were killed by wildlife officers, were the ones that fatally mauled guide Mark Uptain and injured his client northeast of Jackson Hole on Sept. 15.

“It’s just a really unfortunate situation,” said Brad Hovinga, the Jackson regional wildlife supervisor for the Wyoming Game and Fish Department. “We’re very fortunate that bears usually behave like bears should and have a fear of humans. But there are occasions where bears don’t behave like other bears.”

Uptain and his client, Corey Chubon of Florida, had shot an elk on Thursday evening, and on Friday were preparing to pack its body out of the backcountry when the two bears "aggressively" charged them. Grizzlies don't typically attack humans like that, wildlife officials said.

Attacks are more commonly associated with either a surprise encounter, especially if humans came between a mother and cub, or if the bears were defending their food. Neither happened in this case, Hovinga said, calling the behavior "not consistent" with how bears normally behave.

Hovinga said it appears the two men did everything right, including having a pistol and bear spray close at hand.

Uptain was a married father of five and was remembered Wednesday during funeral services at the First Baptist Church in Jackson, where he served on the board of elders.

Grizzly bears living at the Grizzly & Wolf Discovery Center in West Yellowstone, Montana, explore their enclosure. Animals living in the discovery center were either rescued from the wild while young or injured, or faced euthanization because they posed a danger to humans.
Trevor Hughes, USA TODAY

"Mark never met a stranger, only a friend he hadn't met," McDaniel said. "He was a straightforward, honest, loving, caring man."

It's no accident, McDaniel said, that Chubon survived the attack, because Uptain was the kind of man and guide who took seriously his responsibilities to others. Anyone who knew him understood that's just how he was, the pastor said: honest, dependable and  the living embodiment of the Bible verse John 15:13: "Greater love hath no man than this, that a man lay down his life for his friends."

"Mark was a man of action, and he tried to live out what he believed, and he did," McDaniel said. "I believe he is a hero."

Hovinga said the attack has no specific bearing on an ongoing legal case in which a federal judge temporarily halted Wyoming state officials' plan for a grizzly hunt this month. Hunters say they should be allowed to shoot about two dozen grizzlies living near humans, which could reduce the likelihood of this kind of attack.

Opponents of the bear hunt say Uptain's death is tragic but shouldn't be used to sway the judge's decision-making process.