Lawmakers visit with dads separated from kids at detention center 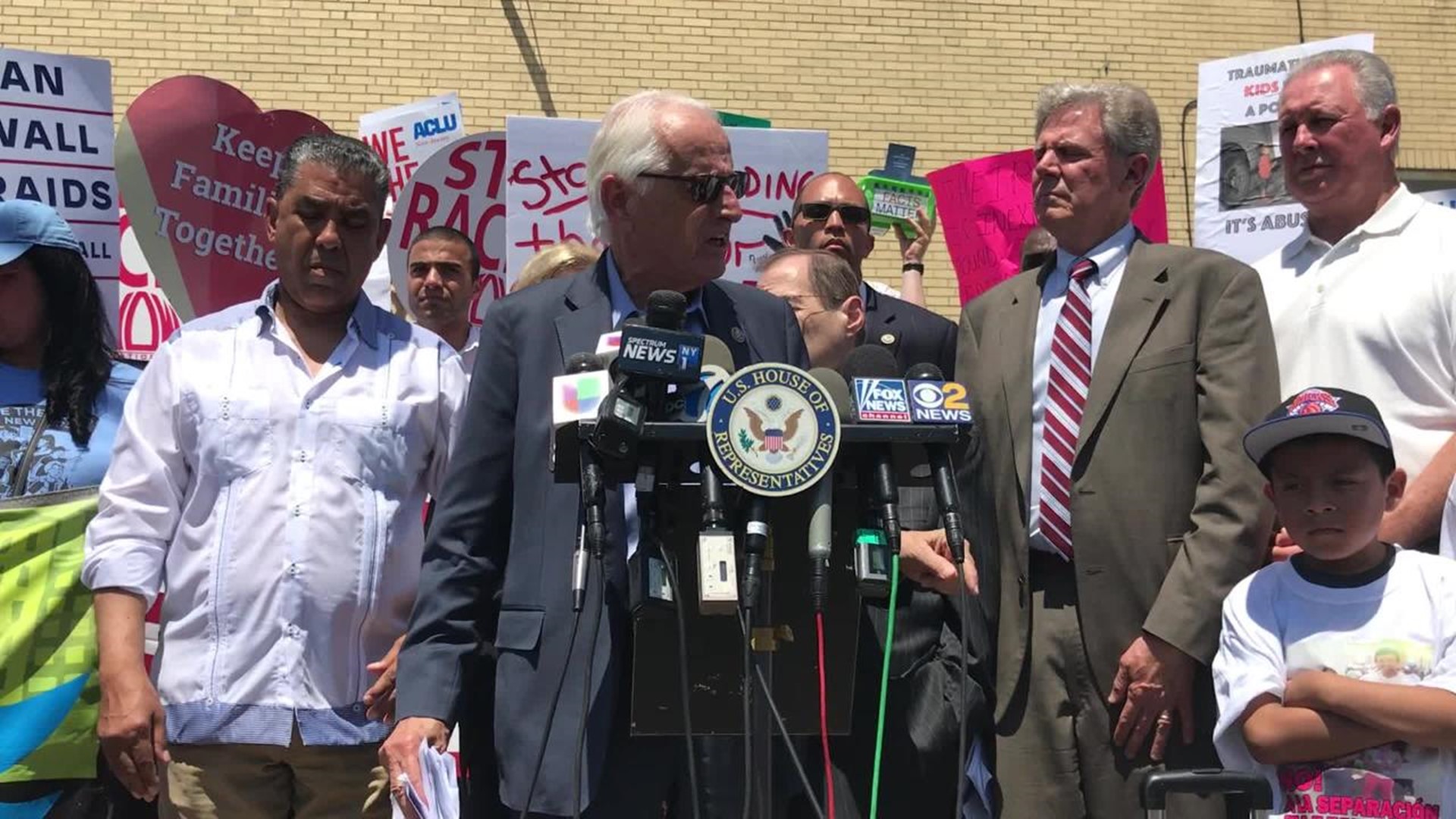 ELIZABETH, N.J. — Democratic members of Congress from New Jersey and New York on Sunday met with immigration detainees separated from children at the southwest border who are now being held at a New Jersey immigration facility.

During a news conference afterward, the representatives said they met with five men at the Elizabeth Contract Detention Facility, four of whom were brought to New Jersey from the U.S.-Mexico border. Some of the men, they said, became emotional when they spoke of their children being taken from them. Some said they don’t know where the youngsters are being kept, the representatives said.

“What I saw in there is inhumane. I see the politics of this administration and it turns my stomach, because I know what this country stands for,” said Rep. Albio Sires, D-N.J. “And that’s not what we are in America.”

Nearly 500 people showed up for a rally organized as part of the visit on Father's Day to protest a Trump administration policy that separates children from parents at the border. By 10:50 a.m., after waiting more than an hour to enter, lawmakers were allowed inside while demonstrators waited outdoors.

“For all the fathers in detention, you are not forgotten” those rallying outside chanted.

After being made to wait over an hour. After having to deal with local PD. After banging on the door and making it clear that we WILL NOT MOVE until we're allowed in, ICE is finally granting us access to see individuals who have been separated from their families. pic.twitter.com/coXJNdxsLP

They are the latest lawmakers who have made surprise visits to immigration detention facilities since the Trump administration announced a new “zero tolerance” immigration policy that calls for the criminal prosecution of undocumented immigrants who have entered the country through the border.

Those stopped are detained and if they entered with a child they are then separated from them. The separation of parents and children has drawn public outrage, prompting demonstrations throughout the nation condemning the practice.

June 10: 'Why are you taking him?': Trauma lingers from 'zero tolerance' immigration policy that separates parents, kids

The United Nations Human Rights Office earlier this month called on the administration to immediately halt the practice of separating families and to stop criminalizing what “should be at most be an administrative offense.”

“Children should never be detained for reasons related to their own or their parents’ migration status,’’ the office wrote in a statement. “Detention is never in the best interests of the child and always constitutes a child rights violation.”

The Elizabeth Contract Detention Facility is managed by CoreCivic, based in Tennessee. Located in an industrial area of the city, the building can hold about 300 immigrant detainees.

Sally Pillay, program director of First Friends of New Jersey and New York, which sends volunteers to visit immigration detainees, said in the last year she said they have seen more detainees from the southwest border moved to New Jersey facilities.

We are here today to tell Trump and Jeff Sessions that America welcomes its tired, its poor, its huddled masses -- it doesn't put them in jails and tent cities. What we saw inside is despicable! It is a sin! pic.twitter.com/XI1E7JhRtQ

“We see a lot in Essex and Elizabeth, and a significant amount of Cubans who have crossed the border coming in, and now they are placed in Elizabeth," said Pillay.