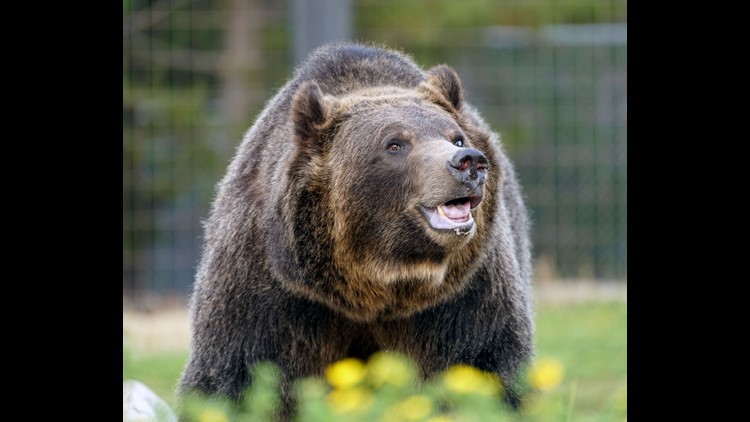 Photo by: Trevor Hughes, USA TODAY
A grizzly bear living at the Grizzly & Wolf Discovery Center in West Yellowstone, Montana, explores its enclosure. Animals living in the discovery center were either rescued from the wild while young or injured, or faced euthanization because they posed a danger to humans.

Wyoming wildlife managers have euthanized two grizzly bears that they believe killed an elk hunting guide and injured his client near the border of Yellowstone and Grand Teton national parks north of Jackson Hole.

The two bears, a mother and cub, are being examined in connection with the mauling death of guide Mark Uptain on Friday in the Terrace Mountain area. Uptain and his client were preparing to pack out an elk they had killed when they were attacked. The hunting client, Corey Chubon of Florida, escaped and called for help. Uptain was a married father of five, authorities said.

"All available evidence indicates that these two bears were the bears involved in the Terrace Mountain attack," Rebekah Fitzgerald, a spokeswoman for the Wyoming Game and Fish Department, said in a statement on Sunday.

Forensic testing will help determine not only if the bears were involved, but if they had any underlying health issues or had previously been relocated by wildlife officials.

According to authorities, the two men were attacked by the bears as they field dressed the elk, which they had shot Thursday but were only able to find early Friday. The bears "aggressively" charged the men, Teton County officials said, but hadn't touched the elk.

Watched over by hungry ravens, a grizzly bear living at the Grizzly & Wolf Discovery Center in West Yellowstone, Montana, explores its enclosure. Animals living in the discovery center were either rescued from the wild while young or injured, or faced euthanization because they posed a danger to humans.
Trevor Hughes, USA TODAY

The incident comes just weeks after a federal judge temporarily halted Wyoming state officials' plan for a grizzly hunt this month, which hunters said was needed to control a growing population of grizzlies living near humans. The Trump Administration last year removed the grizzlies from the protection of the Endangered Species Act, permitting Wyoming to launch a hunt. The hunt is on hold until at least Oct. 1, infuriating hunting groups who had predicted this scenario was likely.

"I can only imagine how horrific this was," said Sy Gilliland, a hunting guide and spokesman for the grizzly hunting community. "You've got a bear population that's basically un-hunted, is an apex predator, and has no fear of humans."

Groups opposing the grizzly hunt mourned Uptain’s death but said September and October often see deadly encounters between grizzlies and humans, as hunters are move active in the areas where the bears are foraging for winter hibernation food.

“We do not want to diminish the loss of a community member, or the suffering of his family. However, construing the incident as a reason to justify the trophy hunting of grizzlies makes little sense,” said Melissa Thomasma of Wyoming Wildlife Advocates. “Killing more bears will not prevent other bear-hunter conflicts, but it may irrevocably jeopardize the health of the grizzly population around Yellowstone.”

The grizzly hunting restrictions were put in place in the 48 contiguous states in 1975 to protect the last of the tens of thousands of bears who used to roam the territory between the Pacific Ocean and the Great Plains. Hunters killed most of them in the 19th and early 20th centuries, leaving about 1,700 in all of the contiguous states, primarily in Wyoming, Montana and Idaho. Alaska's population of 30,000 grizzlies is considered a distinct group.

In the Yellowstone and Grand Teton national park area, the grizzly population had dwindled to just 136 before the 1975 restrictions were ordered to protect the bears and their habitat as the population recovered.

The numbers of bears matters because the legal protections can be withdrawn only if the population of bears is "self sustaining," meaning enough baby bears are born each year to offset deaths. And bears die from both natural causes and human intervention, largely when hunters kill them to protect themselves or when state wildlife officials euthanize bears that have become accustomed to humans and their garbage.