Interior Sec. Ryan Zinke reportedly made a recommendation that could potentially allow logging in the Katahdin Woods and Waters National Monument, according to a report obtained by The Washington Post. 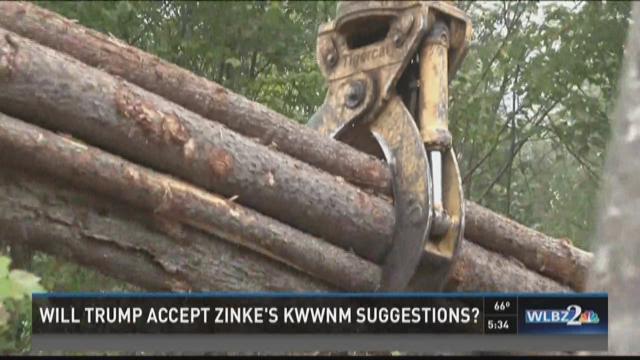 STACYVILLE, Maine (NEWS CENTER) – Interior Sec. Ryan Zinke reportedly made a recommendation that could potentially allow logging in the Katahdin Woods and Waters National Monument, according to a report obtained by The Washington Post.

The report called for an amendment “to promote a healthy forest through active timber management.”

The leaked documents prompted questions on both sides of the monument issue Monday.

Those in the logging industry are hopeful it could ease restrictions on commercial logging in the region.

“Sounds like good news,” Scot Averill said. “So long as it happens anyway.”

Averill and his family have harvested timber in the area surrounding the monument for generations. He and his crew currently harvest logs from privately-owned land just off of monument property. Yet there are roads leading to the monument that he and other loggers cannot use.

”We can’t cross it with logging trucks. They won’t let us go across it,” he said.

That means his trucks have to travel as much as 20 miles in the other direction, according to the Averill.

”It adds another hour probably,” he said. “Both ways.”

This as some privately-owned roads into the monument are open to visitor traffic.

As for long-time national monument proponents: the news of a possible change to land use is jarring.

“We didn’t donate this land to be used as a commercial timbering operation,” Lucas St. Clair told NEWS CENTER Monday.

St. Clair said it is not immediately certain what Zinke means by “active timber management.” He noted that the details in documents also call for the protection of current structures and preservation of land.

“As long as those two things don’t conflict with each other we have a path forward,” he said.

The Natural Resources Council also responded Monday in a statement:

“We have reviewed the leaked memorandum to the President from Secretary of Interior Ryan Zinke, but the implications of the report for Katahdin Woods and Waters National Monument remain unclear. Without more details, we cannot yet judge whether these recommendations are acceptable and consistent with the overwhelming view of Maine people…”

For Averill, he said he plans to just keep going about his day to day until he hears an official word.

”I just like to work. I like the woods work. Nobody to bother you most of the time,” he said.

However, Congressman Bruce Poliquin released a statement today though saying in part: “I am pleased with the Secretary’s recommendations and I believe they strike the right balance in protecting Maine jobs and our way of life.”

The National Park Service has been charged with creating a management plan one over a three year period.

Sec. Zinke’s recommendation will not go into effect until it is approved by President Trump.