Wolfe's Neck Farm announced that it will continue its organic training and mission, but will now be known as Wolfe's Neck Center For Agriculture and The Environment. 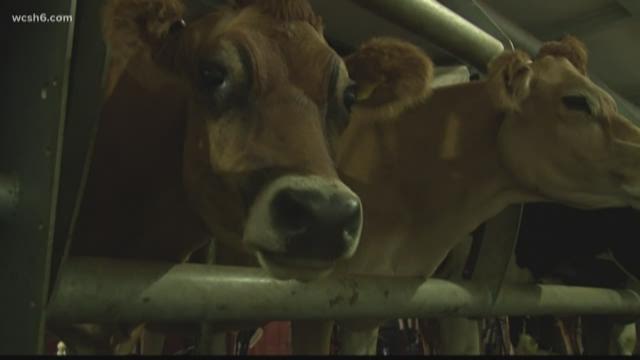 FREEPORT, Maine (NEWS CENTER) -- The Fall Festival will still be happening at the popular Wolfe's Neck Farm In Freeport this month. Pumpkins, hayrides and baby calves waiting to be petted, but the name of the farm where those will be enjoyed has changed.

Dave Herring, Executive Director of the 600-acre farm, announced the name change to Wolfe's Neck Center For Agriculture and The Environment. Herring says that the name isn't a reflection of any changes expected in the farm's mission, but rather a re-branding to better reflect the work already being done.

"This will always be Wolfe's Neck Farm," said Herring. "I think it's part of a way to articulate the breath of the work that's happening here and also the focus of that work."

According to Herring, the new name makes the Freeport location the first regenerative farm observatory in the world. It's where aspiring organic dairy farmers spend two years as apprentices, living on site and going through intensive training. Kelly O'Connell will be among the first graduates of the program.

"This is the farm I chose over other opportunities because it's so connected to the public and to me that's so important that we need to connect and show the public where their food comes from," said O'Connell.

Wolfe's Neck Center For Agriculture and The Environment hopes to grow its current heard of milking cows to 60 head by the spring of 2018. It also plans on having more money by then. $7.5 million raised so far, of an $11.5 million goal. Funds that will be used to continue the education of organic farming and expand the idea that it will solve several environmental issues.

"We have hardships, but it's been fun and very rewarding," said O'Connell. "The rewards you get, pay off those hardships."

The center plans on adding 11 sites around New England, in addition to the Freeport location, where apprentices will be placed to learn about organic dairy farming.