'We don't know what to believe:' BIW picketers on edge as negotiations drag on

The second round of negotiations between Bath Iron Works leadership and its largest union entered its fourth day Thursday with a federal mediator. 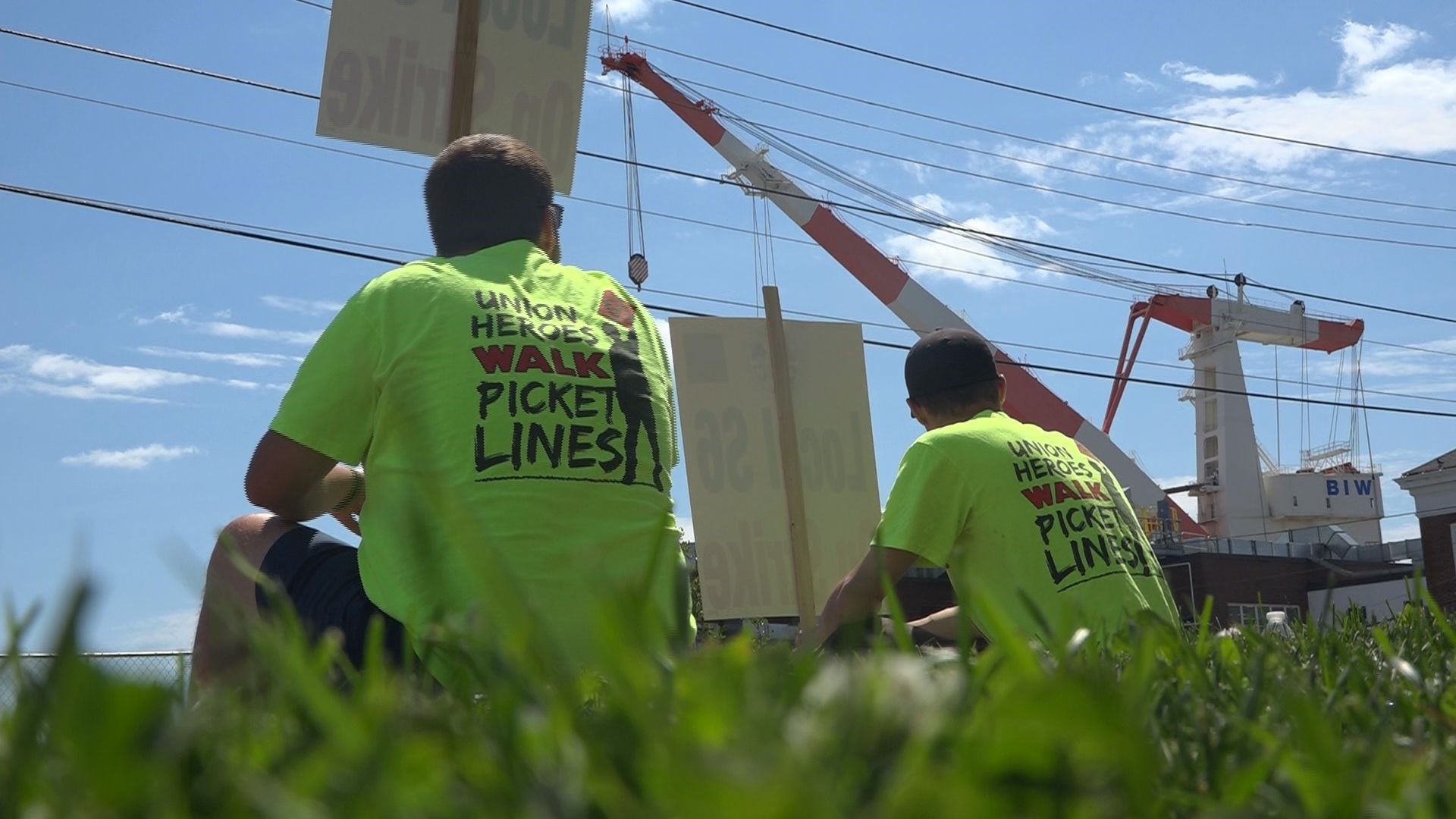 BATH, Maine — The second round of negotiations between Bath Iron Works leadership and its largest union entered day four Thursday with still no resolution in sight.

The handful of workers on the picket line outside the shipyard struggled to keep up the energy now more than six weeks into the strike.

“It's tough. It's tough. I got a family at home. I got four kids. I'm working a side job right now,” Sean Pooler told NEWS CENTER Maine.

Pooler, who served in the Navy, has worked at BIW for six years. He said he is fighting for his future and the security of the men and women who have worked there far longer than he has.

Negotiations started back up again this week with the help of a federal mediator.

Initial negotiations for a new, four-year contract became heated and then ended in June after the company issued its "last, best and final offer," prompting the ongoing strike.

The second round of negotiations at #BathIronWorks entered its fourth day today with the help of a federal mediator. Some of those on the picket line say they are frustrated not knowing exactly what's going on. Catch the story TONIGHT ON #NEWSCENTERmaine. pic.twitter.com/nBuZUcCc22

The Local S6 Negotiating Committee released an update Wednesday morning saying it reached tentative agreements on three articles "resulting in a total of eight since the beginning of the mediation process."

Still, Pooler said he is frustrated by the small amount of information being shared from the negotiating table.

"There's been a lot of silence and I think that's the biggest frustration with everything,” he said. “We don't know what to believe right now."

Union leaders said negotiating guidelines prohibit them from being able to discuss specifics with the public.

"The Negotiating Committee understands that it is very frustrating for our brothers and sisters to receive vague information,” they wrote in the latest update. “This is an incredibly frustrating, challenging, and emotional process."

Earlier in the week union leaders disclosed that negotiations were "appear to be breaking down" despite the progress made.

A BIW spokesman on Tuesday referred to a statement by the mediators, the U.S. Federal Mediation & Conciliation Service:

"Representatives from Bath Iron Works and International Association of Machinists Local S6 are meeting with FMCS assistance this week to continue their negotiations. Though FMCS cannot comment on the substance or status of their specific negotiations, FMCS mediators are working with these parties to resolve the issues that divide them."

The back and forth and lack of transparency was noticeably starting to wear on some of the workers picketing Thursday.

“It just feels like the company thinks of us as the enemy,” Kevin Barstow said.

Barstow said he is hopeful the Negotiating Committee can force BIW leadership to find common ground on the top issues, including being a part of decisions regarding subcontractors and protecting seniority benefits.

"We understand there needs to be a use of subcontractors but the union needs a place at the table to make sure our jobs are secure," he said.

Meantime those who remain on the picket line vow to keep fighting until a fair contract is reached.

“We have to fight for what's right for us, for the legacy of this place,” Pooler said.

A spokesperson for BIW told NEWS CENTER Maine they could not comment on negotiations, referring all questions to the Federal Mediation and Conciliation Service.