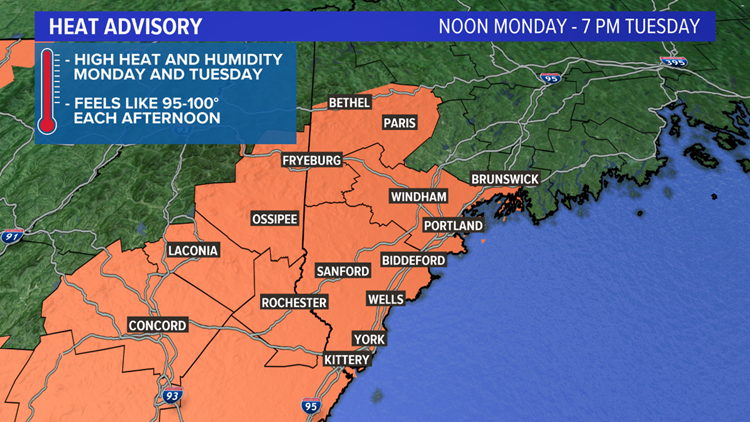 It's been one of the most humid summers in recent memory, and it looks like the very humid weather will continue for most of this week.

Monday and Tuesday will also be hot, with high temperatures hitting the 90 degree mark, especially inland.

After any early fog lifts Monday morning, temperatures will rise fast. Highs will be around 90 near the coastline and into the mid 90s inland.

Combined with high humidity, it may feel like it's near 100 degrees where the temperature hits the mid 90s during the afternoon.

Eastern and northern Maine will be equally hot.

Most of the state will be dry Monday. However, from Bangor north into The County, scattered thunderstorms are expected in the afternoon. Any storms that develop can become severe with damaging wind gusts.

Monday night will be very uncomfortable for sleeping, with temperatures in the 70s for much of the night.

Highs on Tuesday will be near 90 along the coast, before temperatures drop back some in the afternoon due to an onshore breeze. Inland towns will rise into the 90s again.

A bit more widespread rain is possible Wednesday into Thursday, but neither days look like washouts.