The ride-sharing service will expand to the four cities starting March 23. 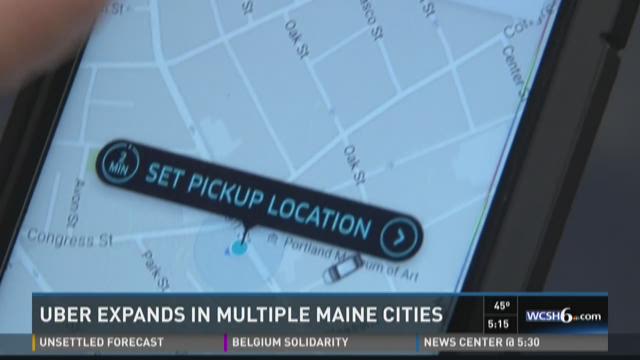 Lewiston, Auburn, Bangor, and Orono will get Uber beginning at 4 p.m. Uber came to Portland in October of 2014.

"We've seen such an incredible demand from the residents of Maine that we wanted to make sure that we were available for more people across different cities and towns in Maine," said Cathy Zhou, general manager of Uber Maine.

Zhou said the concentration of college students at Bates College in Lewiston, and the University of Maine in Orono are part of the reason the company chose those cities.

Uber drivers in Portland say the ease of the app has contributed to the rise in popularity.

"You can't beat growth if there's demand," said Uber driver Jason Bisbing. "You're watching everything in real time. You're watching the car show up on the app when they are two, three, four minutes away."

Some taxi companies are not worried about Uber's increasing usage, claiming they serve an older client base.

"The ones that I deal with -- their old flip phone is what they make their calls on. They're not going to be downloading the Uber app any time soon," said David Rickett, a driver with "MyTaxi" in Bangor.

"They start to hear success stories and it's going to lead to growth of the entire industry," said Bisbing.

Riders can use the promo code "GOMAINE" after 4 p.m. Wednesday to get a free ride.