The Beach to Bacon: a runner's atypical treat waiting at mile five

CAPE ELIZABETH (NEWS CENTER Maine) -- In the wee hours of the first Saturday in August, Diane Blahusch's alarm goes off.

The TD Beach to Beacon 10K is here, and as a Cape Elizabeth resident living along the course, it's only appropriate she watches the thousands of runners hit the pavement in spectacular fashion.

"We get pitchers of mimosas ready," she said, "set up the tables, put out all the lawn furniture."

By the time participants reach Diane's home on Shore Road, beads of sweat have turned into streams. The air is filled with sounds of labored breathing and ecstatic cheers. Fort Williams, the location of the finish line, is just one mile ahead.

In the midst of cowbells and motivational roars, a certain chord struck Diane and her now ex-wife during the race in 2012.

"I think I just realized as we were sitting out on the front lawn drinking mimosas, 'Wouldn't it be cruel to waft bacon fumes into the runners and get a fan in front of a skillet?'"

Yes. The widely adored, arguably most talked-about tradition of the Beach to Beacon was meant to be a prank.

The following year, she put her devious plan into action.

"We started making them the night before and baking them in the oven," Diane explained. "So some are ready."

On race day, she made sure to wait until after the elite runners sped through. When the "normal" runners began to appear, it was time to fire up the grill and get sizzlin'.

The wafts of greasy pig fat drifted into the saturated, August air. Sheets lined with strips of bacon were held out for the taking. The panting competitors, presumably fueled by a light breakfast akin to a banana or power bar, were perplexed.

"The faces we would capture," Diane said through laughs. "The people who aren't expecting it, it's hysterical watching these people look at you like you have just killed their puppy and sold it on Craigslist for a couple thousand dollars, and they think you're the worst human on the planet."

Which, not for nothing, is what she was going for.

"And then others, the complete polar opposite. You would think they just won The Price is Right."

The strong reaction was more than enough to make the gag a permanent tradition she wittingly titled "The Beach to Bacon."

GALLERY: Beach to Bacon - Over the years

Beach to Bacon: over the years 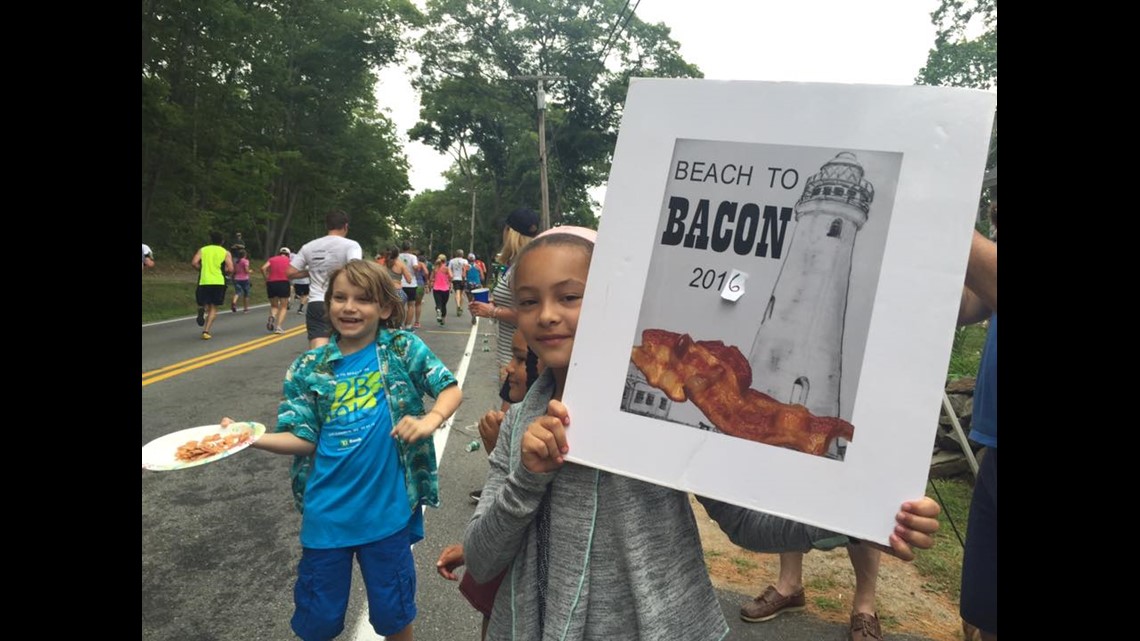 Familiar runners know to expect the best (or the worst) treat at mile five. It's dreaded for some, happily met with an exhausted smile by others. Handfuls of people who miss the boat the first go-around (like me) are bummed to learn of the bacon handouts after the fact.

"They want their pictures taken, the selfie with the kid with sheets of bacon and the sign," said Diane. "Like, 'Oh my god, I've been looking for you! I've been waiting for this!'"

Her small gathering is now a full-blown BYOB (bring your own bacon, duh) fiesta. Bacon napkins. Bacon cups. Candied bacon. Maple Bacon and Cheddar Bacon donuts are promptly picked up at 3 p.m. at the Holy Donut the day before the race.

"It just got kooky."

As if that wasn't enough for a pork party, Diane was on the hunt for a costume.

"Was it Lady Gaga that had the meat dress? I didn't really want to do that," she laughed. She's since turned her efforts towards a bacon flag.

In short: mile five is where it's at, and it's talked about all year long.

Did you run the Beach to Bacon 10k this morning? 🥓

So how much bacon does it take to feed one of the most beautiful races in the world?

"20 packs at least," according to Diane. "You got to have a ton always going on the grill to keep the smell going, which is the whole point of the whole thing."

And the Beach to Bacon is not limited to a specific cut or a specific brand. No, siree. She calls it a smorgasbord of pork.

"They really should have the water stop after us."

Onto its sixth year, the bacon is now a touted characteristic in the official TD Beach to Beacon video posted by TD Bank on Facebook.

"This is where you feel the runner's high. The feeling you can run forever. This is where a volunteer offers you water. A little girl hands you bacon. Wait, bacon? Like, in strips? That's my kind of race."

While the idea was meant to be a social experiment, Diane says the beloved joke is an investment in the community.

"It just felt like a cruel thing to do, and, 'Wouldn't it be funny?' Which is kind of our sense of humor."

It's hilarious. And I argued that it also turned out to be pretty charming.