In a letter to Central Maine Power Wednesday, the Maine Public Utilities Commission spelled out its increased concerns regarding the power company's billing and customer service practices. 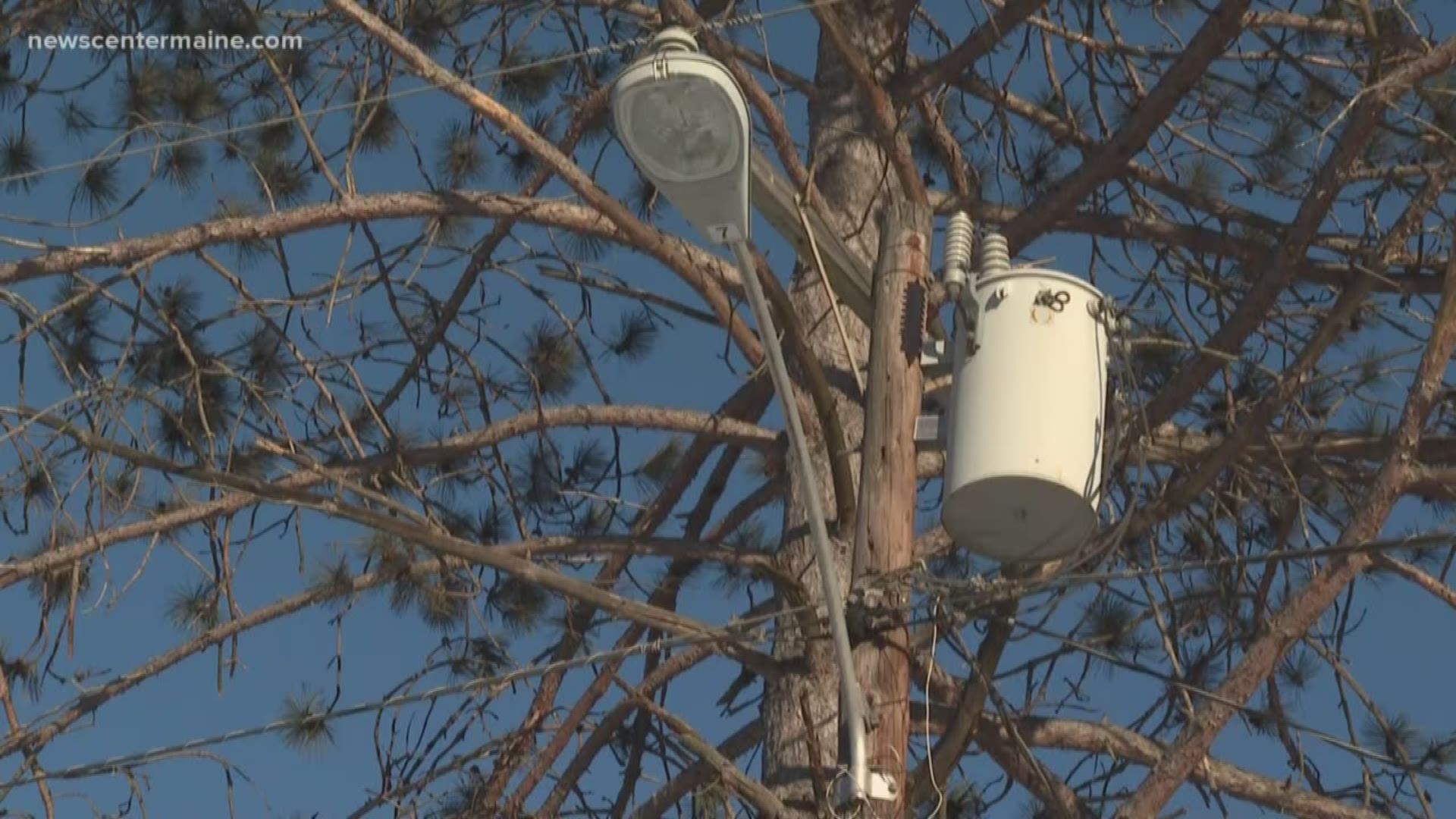 AUGUSTA, Maine — In a letter sent Wednesday to Doug Herling, president and CEO of Central Maine Power, Maine's director of the consumer assistance and safety division blasted the power company for increased concerns regarding problems with billing and customer service practices.

"Over recent months, I have grown increasingly concerned about: 1) the number of new and existing customers that are not receiving monthly bills; 2) Arrearage Management Program (AMP) participants not being properly referred to the Efficiency Maine Trust (EMT); as well as 3) the Company’s continued slow response to customer complaints," Derek Davidson wrote. "While the breadth of the Company’s billing and customer relations problems may extend beyond these three issues, the Company should be able to address these three issues immediately."

"CMP has received the letter from the Maine PUC Consumer Assistance and Safety Division. We take the issues very seriously and intend to respond," CMP spokesperson Catharine Hartnett wrote in a statement.

Chris Costa
In a new letter from the PUC to Central Maine Power, the director of the Consumer Assistance and Safety Division said he is 'increasingly concerned' about billing and customer service issues. MORE:...

Davidson wrote there has been "a significant increase" in the number of customers reporting they had not received a bill in December 2018.

"After a full year of working with the new SmartCare system, the number of customers not receiving bills should be decreasing, not increasing," he wrote.

"The time it has taken the company to address customer complaints, or contact customers who have complained, is clearly insufficient," he wrote. 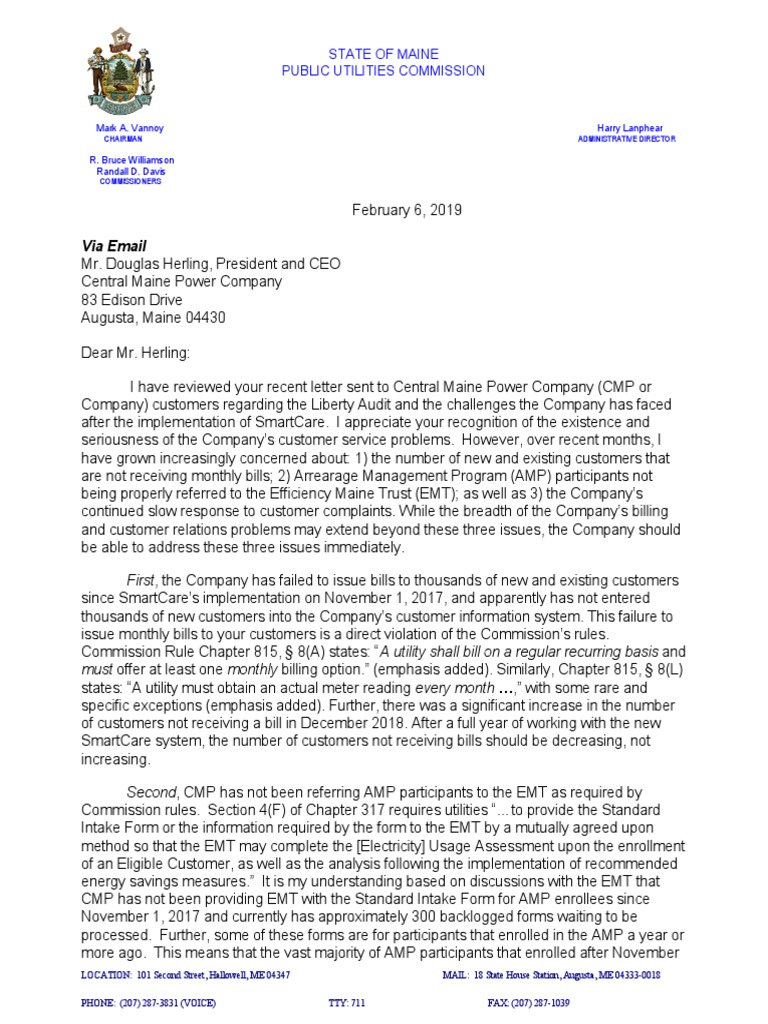 Davidson also noted that CMP has not been referring Arrearage Management Program participants to the Efficiency Maine Trust as required by Commission rules.

The AMP helps people in need of financial assistance with their electric bills.

"It is my understanding based on discussions with the EMT that CMP has not been providing EMT with the Standard Intake Form for AMP enrollees since November 1, 2017 and currently has approximately 300 backlogged forms waiting to be processed," Davidson wrote. "Further, some of these forms are for participants that enrolled in the AMP a year or more ago.  This means that the vast majority of AMP participants that enrolled after November 1, 2017 have not received an Electricity Usage Assessment from the EMT and consequently have not benefitted from any of the programs offered by the EMT."

CMP created a specialized team (Team) in February 2018 to resolve customer complaints of high usage referred by the Commission’s Consumer Assistance and Safety Division (CASD), Davidson noted in the letter.

That team initially agreed to contact each customer within two business days of the referral by the CASD. Due to the large number of customers being referred, the contact period was extended to two weeks at CMP’s request.

"Since the inception of the Team, CMP has not contacted customers within the agreed-upon two-week period," Davidson wrote.

When Davidson expressed concern about this problem in late September, CMP responded in early October, saying the Company had increased resources dedicated to this effort and would scale the resources flexibly going forward to meet the fluctuating volume of inquiries referred.

"Despite this assurance, there has not been an obvious improvement in the Team’s performance," wrote Davidson.

He added that information provided by CMP indicates the Team has failed to reach and resolve over 1,000 customers referred to it by the CASD.

"I strongly urge CMP to take action, without any further delay, to remedy the problems," Davidson wrote.

"Failure to resolve these issues in an expeditious manner may result in the Commission taking enforcement action under one or more of the statutory provisions cited above.

2. Holding the utility in contempt for “fail[ure] to comply with an order, decision, rule, direction, demand or requirement of the commission or of a commissioner."

3. Requiring disgorgement of profits or revenues realized as a result of a violation.

"I believe that such action would not preclude any party or the Commission Staff from recommending remedies in the current rate investigation and would be independent of any such remedies ultimately ordered by the Commission in that case," Davidson wrote.

"What [the letter] demonstrates to me is that [the PUC has] heard the complaints. It's encouraging to me as the public advocate that they are taking actions. You know that CMP will listen and will take action," said Barry Hobbins, Maine's Public Advocate. "We're not going to recommend not one dime or not one penny for a rate increase until they address those issues. I don't mean that to be threatening. I mean that I want Central Maine Power company to survive as a company, but I also want them to do their job."