HARPSWELL, Maine — The Maine Marine Patrol is continuing to patrol for sharks in southern Maine following the state’s first fatal attack on Monday near Bailey Island. Marine Patrol says they are trying to confirm the presence, location, and species of sharks in the area.

Maine Department of Marine Resources says they were notified of a shark approximately 75 yards offshore of Popham Beach on Wednesday, but when Marine Patrol responded they didn't see a shark. The Marine Patrol pilot did spot a sunfish when he flew over the area, which could have been confused for a shark.

Maine's Bureau of Parks and Lands announced Thursday they are closing all "water activities" at Popham Beach and Fort Popham until further notice.

There was another report of a shark near Cousins Island on Wednesday, but the Department hasn't been able to verify if it was a white shark. Out of an abundance of caution, the sighting triggered a shark advisory for Broad Cove Reserve, but that was lifted Thursday morning.

On Tuesday, officials confirmed the shark that killed 63-year-old Julie Dimperio Holowach while she was swimming with her daughter off the Bailey Island shore was a great white. Officials said they were able to make the determination based on a fragment of a tooth that was recovered.

Massachusetts Department of Marine Fisheries Senior Scientist Gregory Skomal, Ph.D, says such attacks are incredibly rare in Maine, but great white sharks have been off the Maine coast for “eons.” The Maine Department of Marine Resources says the only other confirmed shark attack in Maine waters occurred 10 years ago near Eastport, and that was determined to be a porbeagle.

"It's an extremely rare event," Skomal told NEWS CENTER Maine. "I'm not alone in saying I hope it's the only one we ever see."

Skomal is considered the northeast's foremost expert on great white sharks. He was integral in confirming a tooth fragment from Monday's incident was in fact that of a great white.

Marine Patrol is encouraging anyone who sees a shark to report it to a local Marine Patrol officer. This information will be used by Marine Patrol, working with Skomal to identify the species of shark sighted and will also be shared with the Department of Agriculture, Conservation and Forestry (DACF) to determine any action associated with state beaches.

On Tuesday state officials implemented restrictions on nearby Popham Beach State Park and Reid State Park. Out of an abundance of caution, swimmers are urged to only go waist-deep in the water. Marine Patrol is urging caution for swimmers and other recreating in or on the water, including people in paddle craft. Specifically, Marine Patrol recommends avoiding schooling fish and seals, which are prey for great white sharks, the species responsible for Monday’s attack.

NEW: Swimming is now restricted here at Popham Beach as well as at Reid State Park after Monday’s fatal shark attack on Bailey Island. Swimmers are urged to only go ankle to waist deep in the water. #NEWSCENTERmaine pic.twitter.com/yFHuKsShba

Skomal says federal protections for great whites and seals have allowed populations to grow over the last few decades. That combined with more seals and the perfect water temperature can attract sharks to places they may not usually be.

"As long as that population comes back to normal levels the likelihood of seeing more sharks in the Gulf of Maine and along the coast of Maine is certainly higher," Skomal said. 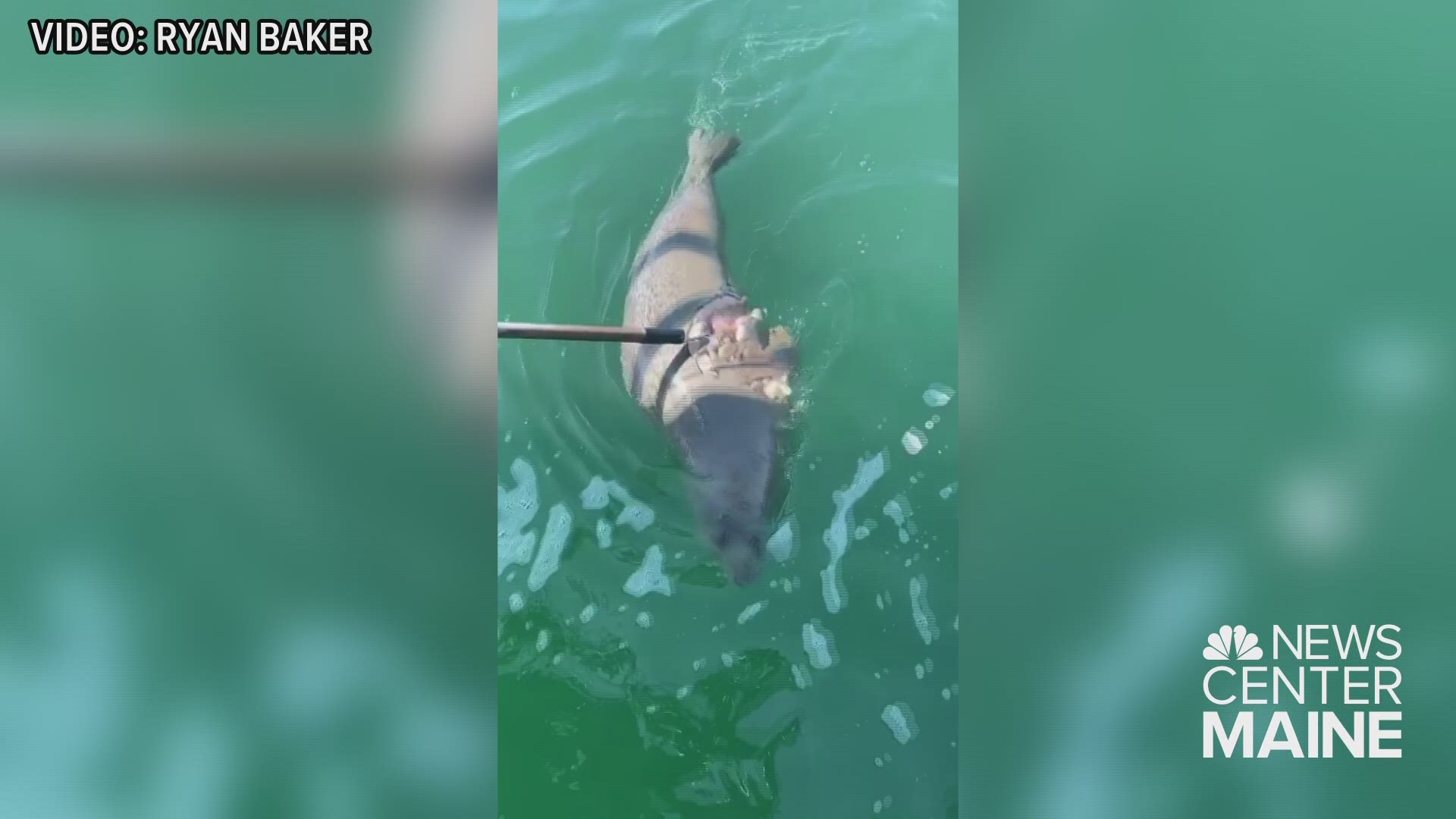 Mainer Ryan Baker shared this video with NEWS CENTER Maine of a dead seal he found in the water at Halfway Rock outside of Portland Harbor, which is near the area of the shark attack Monday in Harpswell.

Marine Patrol pilot Steve Ingram is searching from the air over the southern Maine coast while other officers are conducting targeted patrols by boat in and around the Casco Bay region. Searches will continue until further notice, officials say.

If anyone provides information to a Marine Patrol Officer about a shark sighting, Marine Patrol asks that the information include specific location information, including GPS coordinates if possible. They say photos and video will also help in confirming the species of shark.