Senator Susan Collins told NEWS CENTER Maine about the threatening calls she's received in regards to Supreme Court Nominee, Brett Kavanaugh. She said these calls will not affect her decision. 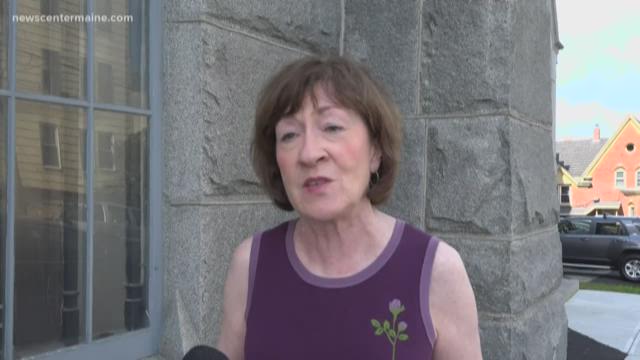 LEWISTON (NEWS CENTER Maine) -- Senator Susan Collins said she has still hasn't made a decision on Supreme Court Nominee, Brett Kavanaugh, but she is getting closer.

"The judiciary committee will vote on Thursday and I want to hear those deliberations to see if there’s anything that I haven’t thought of. But I’m very near making a decision," She said.

Senator Collins said she has been receiving phone calls and packages sent to her offices by those opposing Judge Kavanaugh.

"I don’t know why people who are opposed to the confirmation can’t express their views in a civil fashion. And most of them do, a lot of the vulgar calls are from out of state," she said. "In all my years of public service, I’ve never seen a debate as ugly as this one."

Some things she's received include "three thousand hangers" and "phallic symbols with vulgarities written on them."

She also detailed an incident one of her staffers had when answering the phone.

"A young staffer in one of my offices, who does case work, was told that if I vote for the judge that he hopes that she’s raped and impregnated," Senator Collins said.

She also said, "This attempt to pressure me is not going to be a factor in my decision."

The Senate Judiciary committee will vote on Judge Kavanaugh on Thursday September 20 before the vote goes to the senate.