Sen. Susan Collins took the stage with Cyndi Lauper at her concert with Rod Stewart on the Bangor Waterfront Friday night. 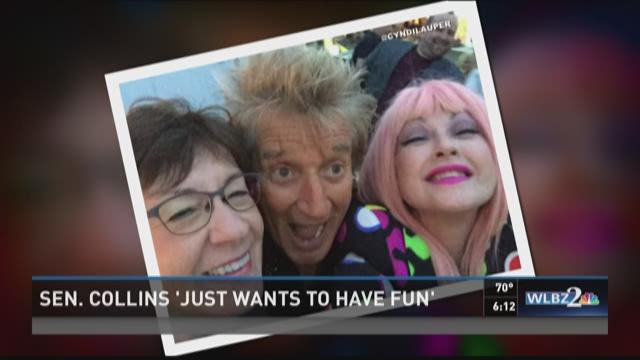 “She’s my hero, and she’s a Republican,” Lauper said as Sen. Collins made it up on stage.

The pair have a connection through Lauper’s organization the True Colors Fund. The group advocates to end homelessness among LGBT youth.

“She helped us so much with the LGBT homeless youth,” Lauper said.

She then asked Collins if she had anything to say to the cheering crowd.

What a thrill having @cyndilauper in Bangor! I will back you up anytime -- on stage or off. #truecolorsfund pic.twitter.com/jLOsxtqkR3

“What a thrilling having @cyndilauper in Bangor!” Collins wrote. “I will back you up anytime – on stage or off.”

NEWS CENTER caught up with Collins Saturday to talk about the experience.

"She came over to the side of the stage and said come on come on,” Collins said. “On center stage with Cyndi. I couldn't believe it. I gotta say it was really exciting!"

Collins said the work to fight youth homeless, brought more $40 million in grant funding to provide resources, such as shelters and programs to Maine and states across the country.

"Not only was I her quote 'hero' which really touched me deeply, but that we republicans care a lot about homeless youth also,” she said as she sang along to Lauper’s ‘Girls Just Wanna Have Fun’.

In her work-across-the-aisle style, Collins said she was not just a fan of Lauper, but of Rod Stewart too.

"I do love Rod Stewart! And that I got to meet him and got a picture of the three of us together was so exciting,” Collins said.

It all happened in the midst of a tense time on Capitol Hill, as lawmakers are struggling to find common ground on a plan to replace Obamacare and the White House is immersed in controversy.

"It's been very stressful in Washington lately,” she said.

Collins remained adamant in her opposition to the latest GOP health proposal.

"What a devastating blow it would be to our rural hospitals and our nursing homes if Medicaid is cut to the point where they simply can't hang on,” Collins said.

The Senator, who also serves on the Senate Intelligence Committee investigating Russia’s reported interference in the 2016 election, voiced concerns about Donald Trump Jr.’s possible involvement. Collins said she wants Trump Jr. to appear before the committee.

"It is really important that the Senate Intelligence Committee learn all of the facts about the meeting Donald Trump Jr. had with the Russians or Russian emissaries,” she said.

Politics aside, Collins said it is just nice to be home in Maine. She is set to return to Washington D.C. Sunday afternoon.