Sailors stranded at sea speak of Coast Guard search, holding on for life during rescue

Two crew members from the sailboat Dove are sharing their story for the first time since making a distress call which led to a days-long Coast Guard search. 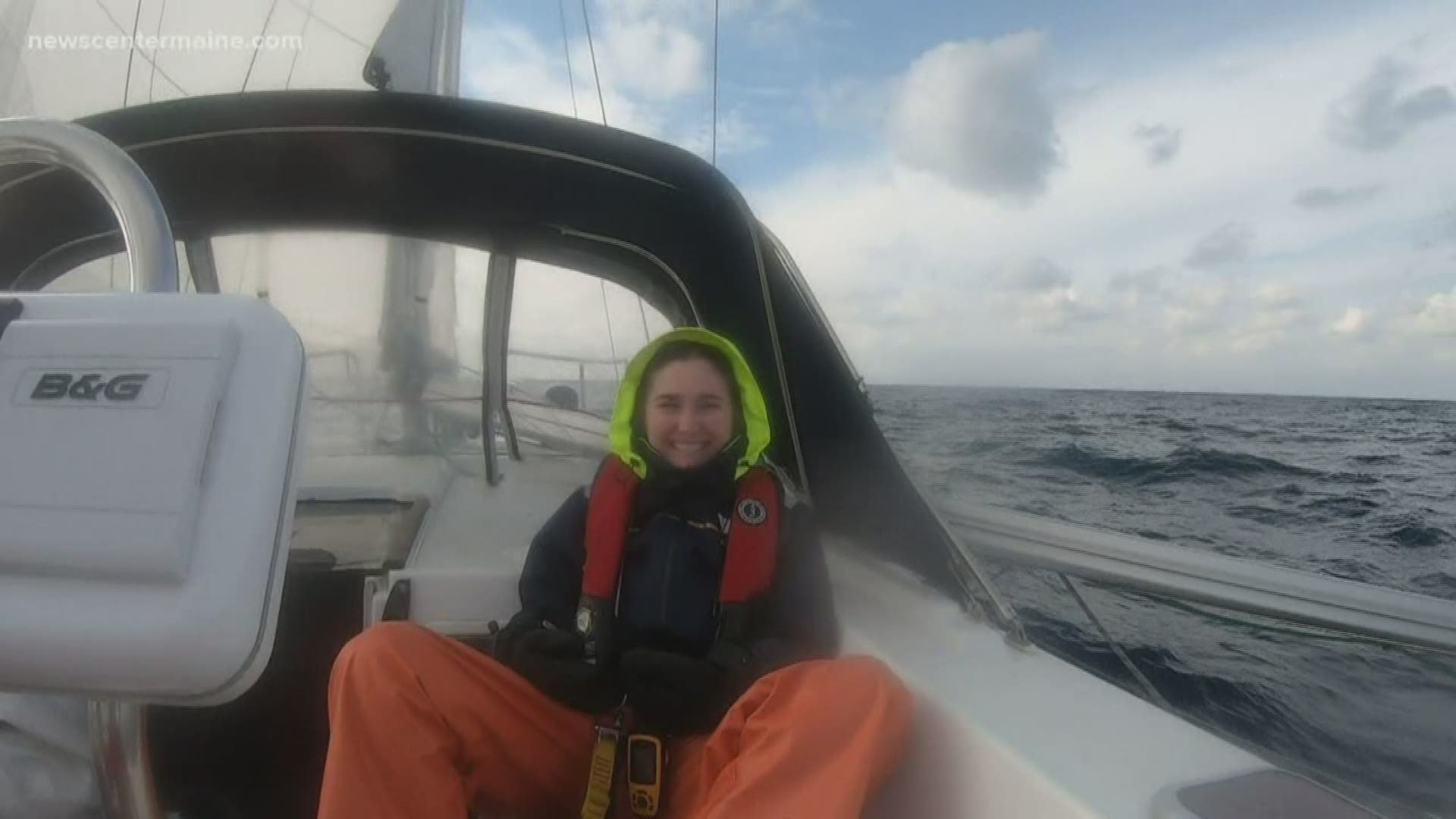 MOUNT DESERT, Maine — On November 15, three crew members aboard the 40-foot boat Dove sailed out of Somes Sound on Mount Desert Island at 11 o'clock at night bound for Miami.

Charlotte Kirby had been living on the sailboat with her fiancee, the boat's owner and captain, Nat Davis, while Dove was on a mooring in Mount Desert.

"My whole life pretty much was on that boat," said Kirby. "Mementos that I was carrying with me for the trip and that I wanted close to me for whatever followed in the future."

Kirby and Davis bought Dove in Miami in 2017.

Prior to 2017, Kirby didn't have any experience sailing a boat as large as Dove.

Credit: NCM
Nat Davis pictured with his sailboat, Dove. The boat's whereabouts are currently unknown after it was unable to be towed to safety off the coast of Virginia.

"I was kind of just along for the ride," Kirby said, of the Miami trip.

Traveling with the couple was Wilfredo Lombardo, a new friend Kirby and Davis had met on the island.

It was cold and dark when the trio boarded Dove at the John Williams Boat Company, sailing her across the sound and out to sea.

Despite Kirby and Davis never having embarked on a week-long trip before, Kirby admitted that she hadn't been checking the forecast prior to leaving for Miami.

"I felt threatened [and] in trouble," said Kirby. "I felt uncomfortable, feeling seasick and throwing up and being shook from one side of the boat to the other. Getting bruised up. Getting banged up."

With barely any cell phone reception on the boat, Kirby was only able to make one brief call.

"I had no idea if they were able to pinpoint my call when I dialed 911 and what that would kind of set into gear," Kirby said.

RELATED: Crews search for two people off the coast of Mount Desert Island

What had started as a days-long trip to Miami quickly became a days-long search by the U.S. Coast Guard.

The Coast Guard sent search crews out by air and on the water to look for Dove as early as 3 a.m. November 16 after Charlotte called 911 due to seasickness.

Frostbite and hypothermia were also a concern for the crew, thought to be in distress, as the Coast Guard search continued into a second and third day.

"[I was] fearing not having communication in case something did go wrong, which it did," Kirby said.

Kirby said the crew had radios and a Garmin aboard Dove but the radios did not work and the Garmin was not activated.

It took three days and the Garmin being reactivated for the Coast Guard to make contact with the crew.

RELATED: Coast Guard calls off search for three missing on sailboat saying all are safe

"They were fearing for our lives," Kirby said of her and Davis' families at home, picturing the worst during the days the crew was presumed to be missing and in distress. "I know for a fact that their hearts were pounding out of their chests and that they were on edge."

"We're not missing," Davis said, upon hearing that the Coast Guard had been searching for them. "We are found."

Found, but still in too deep.

Only 2 days later, sailing through rough winds and surf broke the boat's boom and snapped its mast in half.

Their only hope was to be rescued.

"After having begged to be taken to shore the past 5 days, that's when I knew that we were in trouble, serious trouble," Kirby said. "I felt so out of control just being at the mercy of somebody else and the mercy of the elements too." 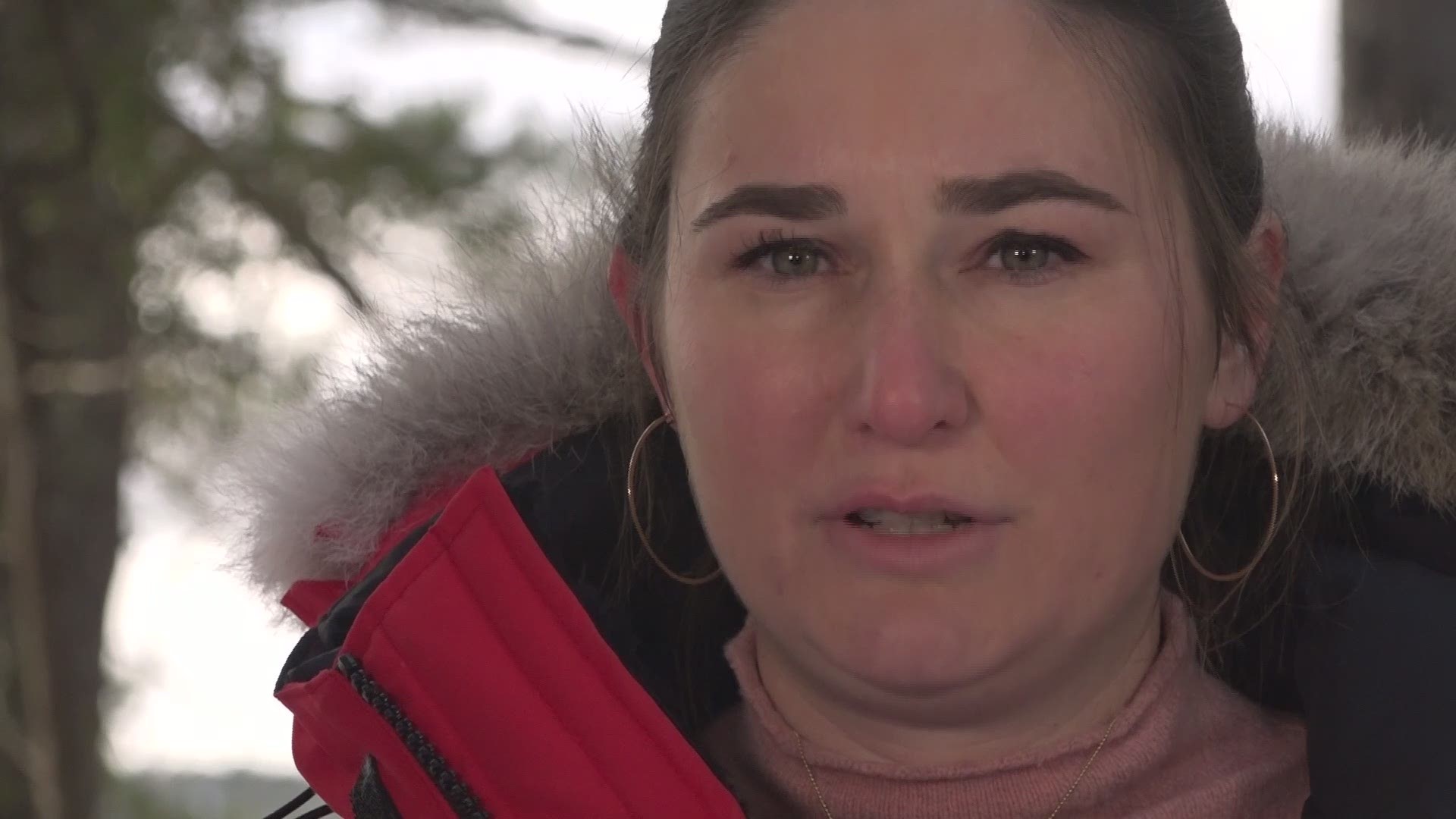 After five days at sea, rescue came for the crew aboard Dove.

"I was really nervous," Kirby said, of the crew's rescue by the carrier vessel Jaguar Max off the coast of Virginia on November 21. "What are they doing? Who are these people? Are they pirates?"

Heavy rain and rising waves forced the trio to hold on for their lives as the crew of the Jaguar Max pulled them aboard and to safety using ropes.

Credit: NCM
The crew of the sailboat Dove being rescued by the crew aboard the Jaguar Max off the coast of Virginia. (November 21, 2019)

"It just kind of speaks to the intensity of the conditions, the fact that the U.S. Coast Guard is unable to find our boat," Kirby said. "Why not, you know? I'm a little curious as to why they were unable to find us."

Officials with the U.S. Coast Guard sector Virginia say the crew is not facing any fines or charges after the search for their sailboat, adding that this incident highlights the severity of changing weather conditions and the importance of having a working radio on board.

Despite Dove still being lost at sea somewhere, Davis said he would do it all over again "for the love of sailing," and his dream to sail around the world.