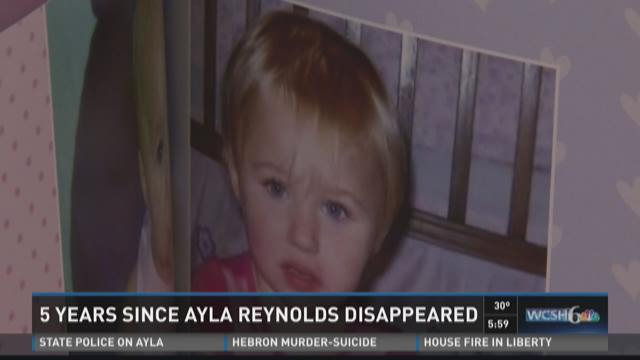 Friday marks 5 years since Ayla went missing from her father's home in Waterville. She was 21 months old at the time and had been living there while her mother, Trista Reynolds, was in rehab for drug and alcohol addiction. DiPietro's mother, Phoebe DiPietro, owned the home but was not there the night Ayla disappeared. His sister, Elisha DiPietro and his girlfriend, Courtney Roberts were home. State police have said those three people know more about this case than they have told police.

State Police also have said there was blood found in the basement of the home and that it was "more than a small cut would produce." But they have not named any suspects, and Ayla's body has never been found.

The Reynolds family believes that Justin DiPietro is to blame for Ayla's death. But Trista Reynolds' stepfather, Jeff Hanson, said he heard from the family's attorney. The letter from Michael T. Bigos states he is not moving forward with a lawsuit "Because we do not believe that we can successfully prosecute wrongful death claims or access insurance coverage for claims related to Ayla’s death."

Reynolds and Hanson said even people who may have visited the home three weeks before Ayla was reported missing could be helpful.

Reynolds said, "If no one comes forward, no one comes forward and I’m stuck, still not knowing. And I’m almost 5 years into this and it doesn’t get any easier as many years as gone by. It gets a lot harder because it’s still,
OK well, when did she go missing? Was she being taken care of? Was she loved? Was someone there with her? Was someone holding her while it all happened or did she go through it all on her own. It’s a mother’s worst nightmare and I keep reliving it over and over and over again."

The family also is planning to file in probate court to have an official declaration of Ayla's death. It is something they couldn't do without her body until the 5 year anniversary of her disappearance.