Read the 43 responses given by lawyer of Ayla Reynolds' dad 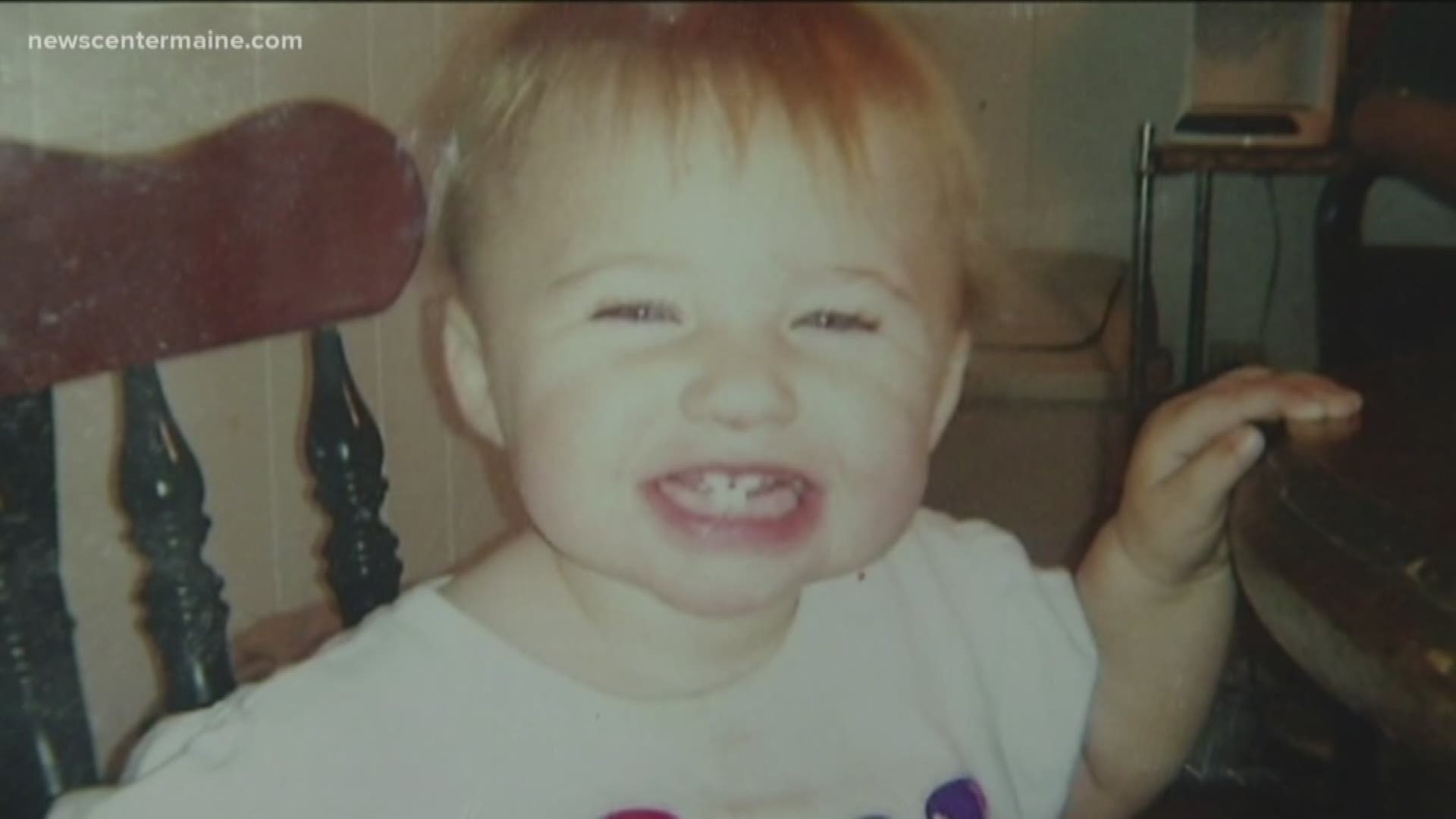 Attorney Michael Waxman spoke on behalf of Justin DiPietro for the first time Wednesday when he addressed to the Morning Sentinel his client's purported involvement in the case and accusations of failing to cooperate in the matter.

Twenty-three of the answers were admissions, eight were denials, two were left unanswered due to the "incorporat[ion of] previous averments" and 10 were a mixture of admission, denial, objection and qualification.

He also, on behalf of DiPietro, states denial on both counts of wrongful death (36-41) and conscious pain and suffering (42-43), including all associated accusations, near the end of the response filing.

Admissions in Waxman's responses include: the purchase of a life insurance policy on Ayla about a month before her disappearance (9); Ayla suffering a broken arm on Nov. 11, 2011, said to have happened when DiPietro tripped and fell while holding her, for which she did not get medical treatment that night (10); and the presence of six people — Ayla, DiPietro, DiPietro's girlfriend Courtney Roberts and her young child, DiPietro's sister Elisha and her young child — at DiPietro's mother's house on Violette Avenue in Waterville on the night of Dec. 16, 2011, when Ayla was last seen (15-18).

Below, we've merged versions of the attorneys' correspondences, consisting of averments (A) from Reynolds' lawsuit, filed Nov. 30, 2018, by her lawyer William Childs; and DiPietro's lawyer's responses (R), filed Thursday.

A1: Plaintiff Trista Reynolds (hereafter, Trista) is a resident of Portland, Cumberland County, State of Maine. Plaintiff brings this action in her capacity as the Personal Representative of the Estate of Ayla Bell Reynolds (deceased) (hereafter, Ayla).

R3: Deny. Defendant is a resident of Los Angeles County, State of California.

A4: Justin is the father of Ayla.

R5: Admit/Qualify: The parents were never married and had not filed any Complaint for Determination of Parental Rights and Responsibilities, so no court order governed the parties' rights of custody or visitation with Ayla.

A6: Beginning on or about October 17, 2011, Justin took physical custody of Ayla. On that date Justin went to the apartment of Jessica Reynolds, Trista's sister. Ayla was staying with Jessica while Trista was hospitalized.

A7: Officer Charles Weaver of the Lewiston Police Department was at the scene when Justin took Ayla from Jessica's apartment. According to Officer Weaver's official report, Ayla was in the kitchen and was laughing, playing and attempting to make conversation with Officer Weaver. Then the Officer had Justin come to the apartment door. When Ayla saw Justin she immediately broke down crying and attempted to flee through the kitchen. Ayla continued to cry uncontrollably as the Officer picked Ayla up and handed her over to Justin.

R7: Deny/Qualify/Object: This numbered paragraph contains multiple averments. Defendant admits that a law enforcement officer was present for this exchange; Defendant does not know his identity. Defendant is not in possession of Officer Weaver's report and therefore lacks sufficient information to form a belief as to the veracity of the statements characterizing the contents of that report. Consequently, Defendant denies the remainder of this numbered paragraph.

A8: Ayla thereafter resided with Justin in a house owned by Justin's mother, Phoebe DiPietro (hereafter, Phoebe), on Violette Avenue in Waterville, Maine.

A9: After Justin took custody of Ayla, and approximately one month before Ayla disappeared, Justin purchased a life insurance policy on Ayla from an individual named Derek Tudela.

A11: According to Justin, he was carrying Ayla and tripped, falling on top of her and causing the injury to her arm.

A12: Justin did not seek any medical care for Ayla that night.

A13: It was not until the next day, November 12, 2011, that Ayla was taken for emergency medical evaluation and treatment. Ayla's injury was diagnosed as a distal humerus fracture of her left arm, with displacement (both rotation and angulation). Ayla's arm was severely swollen, with developing ecchymosis, and Ayla was crying. The injury would likely have been very painful.

R13: Admit/Deny/Object: This numbered paragraph contains multiple averments. Defendant admits he brought Ayla for medical care on November 12, 2011. Defendant lacks sufficient information to form a belief as to the veracity of the several other averments contained in this paragraph and therefore denies the same. Defendant did not believe that Ayla's arm was "severely" swollen or that she was in great pain on November 11, 2011.

A15: On the evening of Friday, December 16, 2011, Justin DiPietro was present in Phoebe's Waterville house with Ayla.

A17: Also present that evening at Phoebe's house was Courtney Roberts, who was in a dating relationship with Justin, and Courtney's young child.

A20: According to Justin, he had put Ayla to bed the previous night and she was gone in the morning.

A21: Justin has maintained that someone abducted Ayla from the house while everyone was sleeping.

A22: The ensuing investigation by local and state authorities discovered blood in the basement where Justin's bed was located, in the room where Ayla was sleeping and other locations within Justin's house. Samples of the blood were tested by the authorities and were established to be Ayla's.

R22: Deny/Object: This numbered paragraph contains multiple averments characterizing an entire investigation by third parties including numerous documents and statements. Defendant lacks sufficient information to form a belief about the veracity of these multiple statements and Plaintiff's characterization of an investigation by third parties and therefore denies the same.

A23: A sample of blood taken from Justin's truck was also confirmed as being Ayla's blood.

R23: Deny/Qualify: Defendant lacks sufficient information to form a belief about the veracity of this averment and therefore denies the same.

A24: On December 30, 2011, police said that they considered the search for Ayla to be a criminal investigation and that Ayla's disappearance was the result of foul play.

R24: Deny/Qualify: Defendant lacks sufficient information to form a belief about the veracity of this averment and therefore denies the same.

A25: According to a report originally issued by the Maine State Police on or about March 19, 2012, "[i]nvestigators have ruled out any possibility that Ayla left the house on her own or that she was abducted." See Maine Department of Safety website /Maine State Police/Criminal Investigation & Forensics/Unsolved Homicide Unit/Missing Persons at http://www.maine.gov/tools/whatsnew/index.php?topic=state_police_unsolved&id=605022&v=Article-missing (last visited November 20, 2018). A true copy of this webpage is attached hereto as Exhibit A.

R25: Deny/Qualify/Object: Plaintiffs averment is a characterization of what is claimed to be a report allegedly posted on a website. Defendant cannot comment on the authenticity of a webpage or the source material found therein. Defendant denies this numbered paragraph.

A26: According to the same Maine State Police report, and recited in the web page cited in Paragraph 25 above, investigators believed "the adults who were in the home" the night of Ayla's disappearance "are withholding information." The adults in the home that night were, at a minimum, Justin, Elisha and Courtney.

R26: Deny/Object: This numbered paragraph contains multiple averments characterizing heresay statements from third parties contained in a report allegedly posted on a web page. Defendant lacks sufficient information to form a belief regarding these averments and therefore denies the same. Defendant admits that the adults in the home that evening were Justin DiPietro, Elisha DiPietro, and Courtney Roberts

A27: To date Ayla has not been found despite, according the Maine Department of Public Safety, officials having conducted (as oflate 2012) the largest criminal investigation in Maine history, as well as one of the largest missing child searches in Maine history.

R27: Admit/Deny/Qualify: Defendant admits that Ayla has not been found. The remaining averments contained in this numbered paragraph characterize the nature of the investigation into Ayla's disappearance. Defendant is not qualified to comment upon the accuracy of this characterization and therefore denies the same.

A29: On or about May 17, 2017, Trista was appointed as Personal Representative for the Estate.

A30: After the passage of more than five years since Ayla's December 2011 disappearance, on or about May 24, 2017, Trista filed in the Cumberland County Probate Court a "Petition For A Finding Of Death As A Matter Of Law Pursuant To 18-A M.R.S. § 1-107(3)" (hereafter, the "Petition"). The Petition sought a judicial determination the Ayla had died on or about December 17, 2011.

A31: Justin was personally served in California with a copy of the Petition on June 12, 2017. Together with the Petition Justin was served with a document captioned "General Notice Of Beginning Of Formel Probate Proceeding With Hearing Date" stating, inter alia, the nature, date and location of the scheduled hearing on the Petition; that he could appear and object at the hearing; and that he also could file written objections to the Petition.

A32: According to the affidavit of the person who personally served Justin with the Notice and Petition, Justin "denied his identity even though he matched the photo" of Justin provided to the process server. Affidavit of Nelson Tucker dated June 15, 2017. A true copy of this Affidavit is attached hereto as Exhibit B.

R32: Deny. This averment makes claims about the contents of an affidavit. Defendant denies the statement made in that affidavit claiming that Defendant allegedly denied his identity.

A33: Justin failed to attend the September 21, 2017 Petition hearing and filed no written objection.

A35: Maine law provides that when the death of a person is caused by a wrongful act, then the Personal Representative of the Estate of the deceased person may bring an action and recover damages. 18-A M.R.S. § 2-804.

R35: Objection/Deny: This averment states a legal conclusion/characterization to which no response is required or appropriate. Accordingly, Defendant denies this numbered paragraph.

A36: Plaintiff repeats and incorporates by reference the allegations contained in paragraphs 1-35.

R36: This averment does not require an answer as it merely incorporates previous avennents.

A37: On information and belief, Justin DiPietro, acting alone or in concert with one or more other persons, ( a) wrongfully, through intentional actions, caused the death of Ayla Reynolds on or about December 17, 2011; and/or (b) planned and/or participated in removing Ayla's body from the Violette Avenue house, and concealing and disposing of Ayla's body, all with the intent and purpose of preventing the discovery of information concerning Ayla's death by law enforcement personnel.

A38: As a direct and proximate result of Justin DiPietro's intentional wrongful actions, including those resulting in Ayla's death and thereafter, the Estate of Ayla Reynolds and the statutory heirs of Ayla Reynolds have suffered damages for which Justin is liable.

A39: The Estate has suffered or will suffer damages in the form of reasonably anticipated funeral and related expenses, costs associated with probating the Ayla's estate, and other pecuniary injuries.

A40: Ayla Reynolds is survived by her mother Trista, who is a statutory heir within the scope of 18-A M.R.S. § 2-804(b) and 18-A M.R.S. § 2-106, and who has suffered damages as a result of Ayla's wrongful death, including but not limited to professional fees and expenses that were required to petition the Probate Court for a presumption of death order; emotional distress; loss of comfort, society and companionship; and other pecuniary injuries, all of which are compensable under 18-A M.R.S. § 2-804(b).

A41: Justin DiPietro's wrongful actions, including causing the death of Ayla Reynolds and thereafter, were undertaken with malice, express or implied,

A42: Plaintiff repeats and incorporates by reference the allegations contained in paragraphs 1-41.

R42: This averment does not require an answer as it merely incorporates previous averments.

A43: As a result of the wrongful acts of Defendant Justin DiPietro described above, Ayla Reynolds was caused to suffer conscious pain and suffering in the form of pre-death pain, fright, terror and physical injuries, for which Plaintiff is entitled to recover as permitted by 18-A M.R.S. § 2-804, as well as such further damages as may be available under common law.