Modern farmers are collaborating with chefs like never before, and the people eating out in Portland are the beneficiaries. The 'foodie' movement is all about 'farm-to-table.' It always has been. 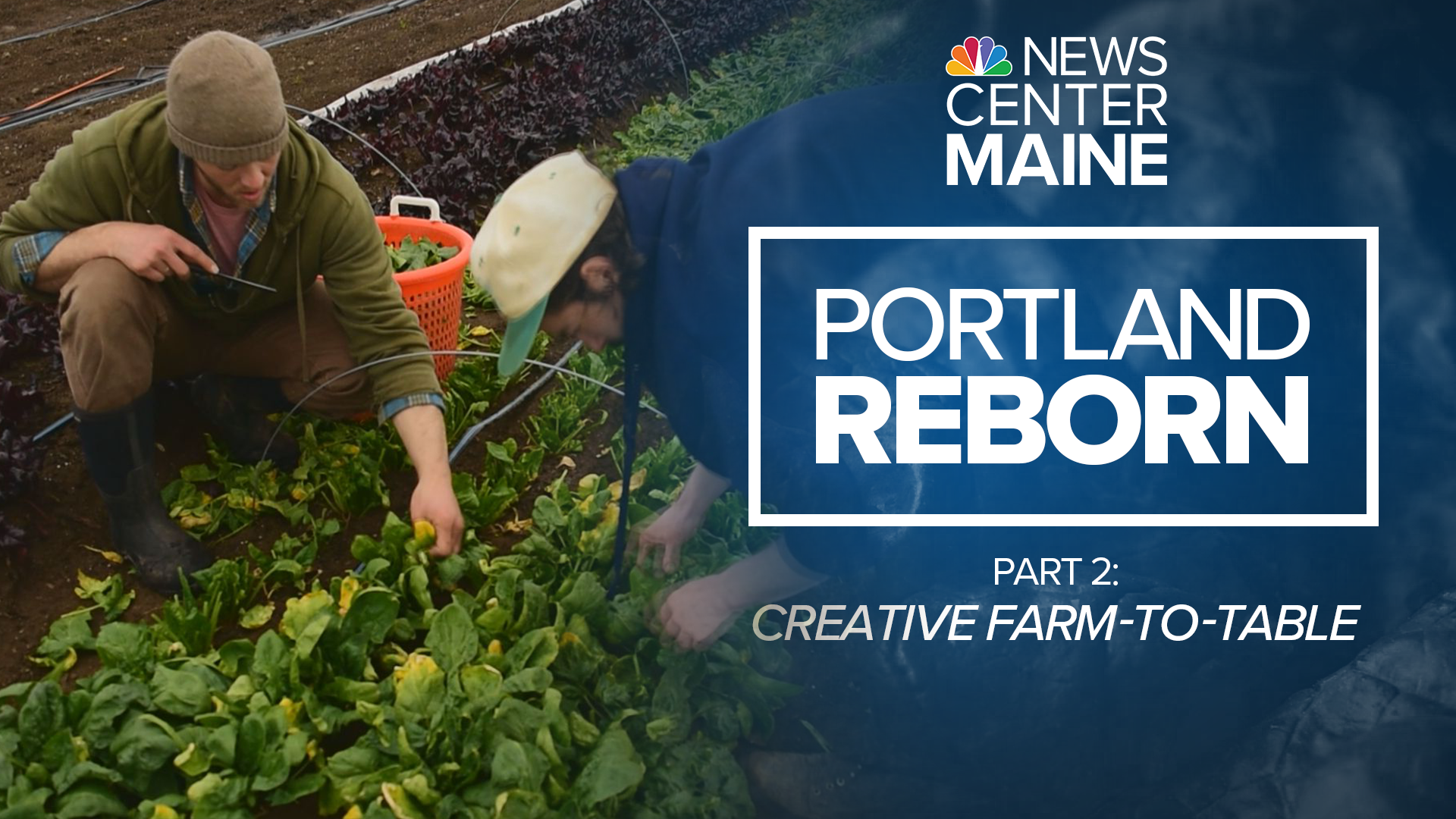 PORTLAND, Maine — If you’re running a restaurant in Portland, and you’re not part of the farm-to-table movement, good luck.

This concept, of sourcing your veggies and protein from nearby farms, is one of the biggest reasons Portland is the hottest place to dine in the country. And for that reason, farming is cool again.

Modern farmers are forging close relationships with restaurants. They're actually tailoring their crops to what the top chefs need. It’s a symbiotic relationship that’s fueling the food scene explosion.

March in Maine. Snow still covers the fields. It’s mud season, right? Not growing season. Or is it?

Inside the greenhouses at Bumbleroot Organic Farm in Windham, it’s harvest time. They grow spinach and lettuce, leeks, shallots and onions. Much of it is earmarked for restaurants in Portland. This farm is run by two young couples who did not grow up here.

"We were looking for a place that had a vibrant food scene, and Portland was really the one place that jumped out at us," says Ben Whalen of Bumbleroot. "The plan was to be relatively close to the city, and we thought we could pretty easily get into selling to restaurants and stuff."

Bumbleroot is certified organic, with no synthetic chemicals, no pesticides and no herbicides. It makes farming more challenging, but this is the type of food chefs want.

"We are really thinking about the final plate. That the customer is seeing. And that is something we talk to chefs about," Whalen adds. "Some chefs like only lettuce and other chefs like lettuce, chard, and beets, so we try and cater to that."

It's a new way of thinking as a farmer. They're actually thinking about what the plate looks like at the end of the process.

After picking his greens, Ben Whalen drives them into Portland, and he knocks on the back door of David's Restaurant. Chef David Turin needs his daily salad fixings.

David opened his first Maine restaurant in 1992, and he’s been in his downtown location for 20 years. He’s among the pioneers of the modern Portland food scene. Even before the term farm-to-table was coined, he was farm-to-table.

"Oh we’ve been doing that forever," Turnin says, "like I didn’t know that was a thing. You just bought the freshest food you could."

Like so many of the chefs in Portland, Turin says the dining experience must be authentic, and that starts with local veggies, fish and meat. It's also authentic because it’s owner operated, experimental and relatively small.

There's no silent partner making money-saving demands in the name of a greater profit margin. And, there’s a very good reason Turin didn’t need an angel investor all those years ago. The economy was hurting.

"It was cheap to get into business," he says. "As a chef-owner I came to Maine and took over a failed restaurant, like so many of my colleagues did. Got in and the landlord is sitting there holding an empty space with a bunch of restaurant equipment. 'Hey, pay me a little bit of money every week and you can have this restaurant,' y’know? 'Just go in and see what you can do.'"

Aside from the farm-to-table philosophy, that might be the single most important factor in the success of Portland restaurants back in the day. It was cheap to get started, so chefs like Turin could take chances, be creative, push the envelope. The bottom line wasn’t about money. It was about a great dining experience.

A slew of new, young, creative restaurateurs are here now trying to capitalize on what people like Turin started. Among them: Peter and Orenda Hale of the Drifter's Wife. They were working in kitchens in Brooklyn during that city’s restaurant renaissance, and they saw Portland as Brooklyn’s successor. Like Turin, they were cash-poor, but the city of Portland helped with grants and loans.

"For us it was really important to not take on investors," Peter Hale says.

Portland is the dining destination, but it is also a drinking destination. After all, you’ll need a great craft beer to wash down that fantastic food, right?

NEXT: Portland Reborn, Part 3: I Pledge Allegiance to My Beer