Portland artists create murals to honor, celebrate those who made East Bayside community 'as awesome as it is'

'It's important to make them understand that this community cares about them.' 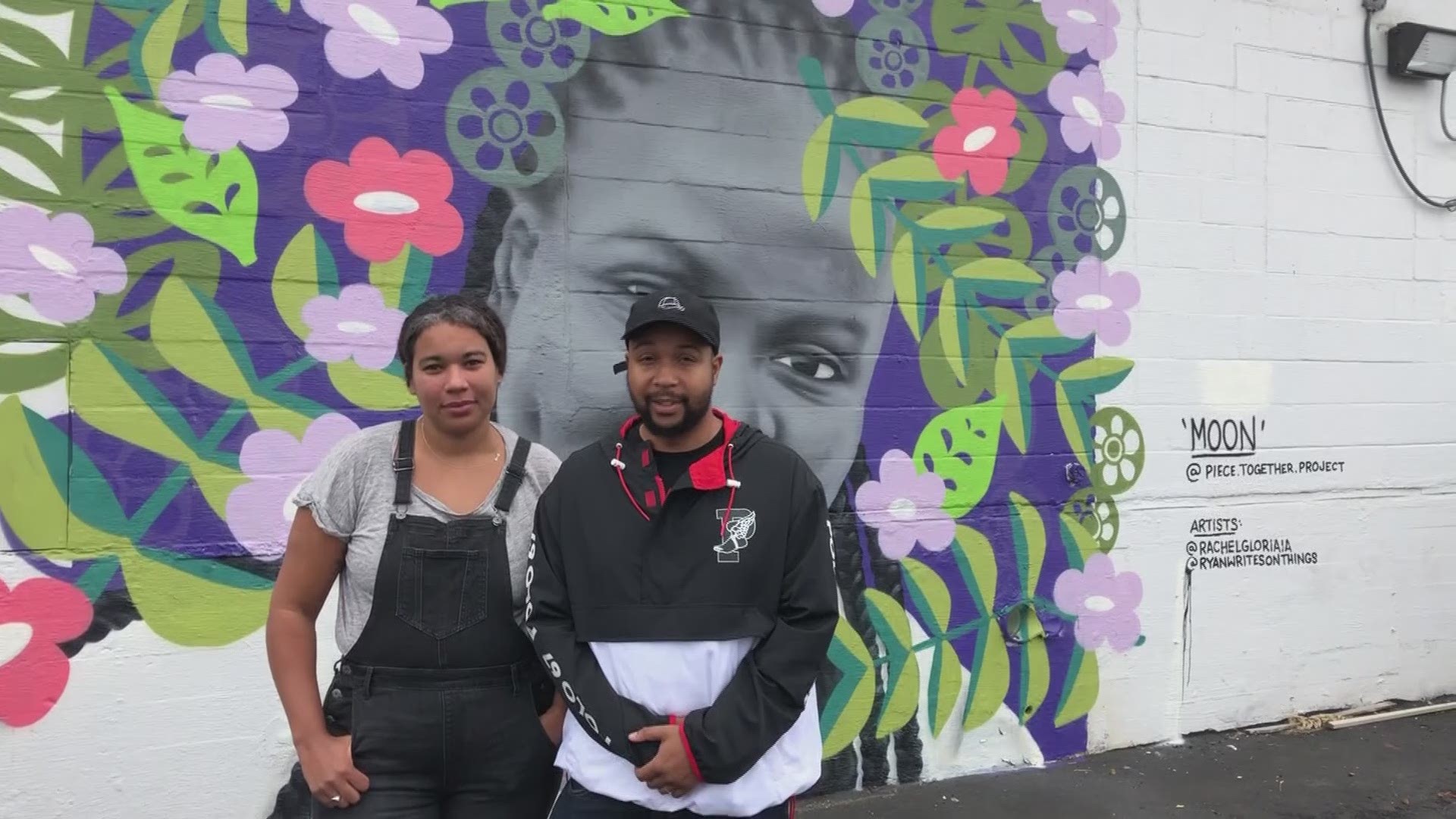 PORTLAND, Maine — The soccer fields and basketball courts in the Kennedy Park housing development are buffered on one side by upscale condominiums and pricey restaurants ... and on the other by trendy breweries and coffee shops.

But now, as East Bayside children take a shot at the basket or aim for the goal, they’ll look see the warm eyes of a woman the neighborhood knows and loves, looking back at them from a large mural on the wall of nearby Rising Tide Brewing Company.

Nyamuon Nguany Machar — known to all as just "Moon" — grew up right there in Kennedy Park.

Ensuring the people who made East Bayside "as awesome as it is" are honored and not forgotten was part of the inspiration for the Piece-Together Project, a series of murals including that of Moon that is underway by artist couple Ryan Adams, a muralist, and Rachel Gloria Adams, a textile and pattern designer.

"I'm born and raised here in Portland, and I've seen the community change a lot over the last few years, especially," muralist Ryan Adams said Monday. "And with all the growth that's happening, I mean, it's a good thing in a lot of respects but I want to make sure, or I really wanted to make sure, that the people that made this community as special as it is aren't overlooked and forgotten."

"When I was a child, I ran here. This used to be a truck stop ... so knowing and seeing now the next generation of young, disproportionate and black children running around here and seeing businesses go up, it's incredible for the economic development, right?" Moon said Monday, standing beside her mural, across the street from Kennedy Park. "But it also leaves out a certain demographic that maybe can't afford like, to, like actually enjoy the luxuries that are being put forth right in front of them."

"She's very involved in the community and does a lot of great things," Ryan Adams said of Moon. "I kind of put the feelers out there, just kind of asking people, 'Who do you think would be a good fit, um, for this project?' and her name came up [from] I think, three different people."

"And so as you see these beautiful building names and excellence in delivery, it's important to be able to see the representation of yourself in this space also," Moon said. "This is our way of trying to build a partnership with these spaces, and still have representation. So many businesses are volunteering their walls ... to be able to black brown and disproportionate communities on their walls is incredible, so I was just excited to be a part of this."

A block away, on the other side of Coffee By Design, a second mural celebrates Alain Nahimana, one of the founders of the Greater Portland Immigrant Welcome Center. Nahimana died earlier this year.

"His work advocating for immigrants, social justice, equality and women’s rights will be remembered by our community for generations to come," the two artists wrote on Instagram.

They had hoped to complete a third mural before the weather grew cold, with plans for four or five rotating murals. Since the project began, however, business owners have contacted the couple interested in hosting a mural on their building — which means murals won't have to be painted over to make room for another.

The Adams run several businesses including Rachel's textile company, TACHEE, and Ryan's work as a muralist, sign painter and designer. And together with another couple, they co-own Better Letter Commercial Letter. They're also raising two small children in Portland.

Still, Ryan finds time to paint elsewhere — including a mural of George Floyd on a wall at Aura in June after Floyd was killed May 25 in Minneapolis, spurring months of protests of police brutality across the country.

"Having art be accessible and representation is key, so to have people from the community that might not be going into fine art galleries every weekend still be able to access large work and to be represented through those pieces I think is one of the main drivers behind this project," Ryan Adams said.

The couple encourages people from the East Bayside neighborhood to visit their website to nominate people — all sorts of people — who have played a significant role in the community as subjects for future murals.

"It's also important, too, to us, too, that it's not only people of color," Rachel Gloria Adams said. "A neighborhood is not just one type of person. we want to make sure it captures the essence of the neighborhood which is people of all different colors and backgrounds."