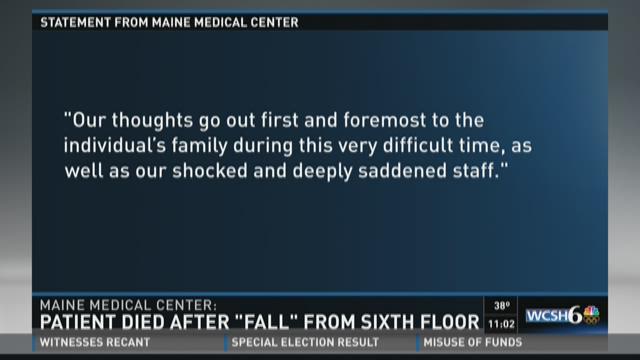 UPDATE: Police have identified the man who fell or jumped from MMC yesterday as forty-three-year-old Paul Cady. The circumstances around the death are still under investigation but are not considered suspicious.

PORTLAND, Maine (Portland Press Herald) -- Portland police say they are investigating the death of a patient who fell or jumped from a window on the sixth floor of the Richards Tower at Maine Medical Center on Tuesday evening.

Portland police said Wednesday morning that they were investigating the death as an apparent suicide. They say the man was a patient who is believed to have jumped from a window.

Lt. Mike Jones said the department’s Criminal Investigation Division is looking into the circumstances of the incident, which was reported to police at 5:10 p.m.

Authorities are not releasing the patient’s name pending notification of relatives.

“Maine Medical Center is cooperating with Portland Police in their investigation of the death of an admitted patient who died following a fall from the sixth floor of the Richards Tower this evening,” Holtzman said in a statement.

“Our thoughts go out first and foremost to the individual’s family during this very difficult time, as well as our shocked and deeply saddened staff. While the investigation is ongoing, all of our thoughts are focused on the individual, their family, and others impacted by this tragic event,” Holtzman added.

Holtzman said the hospital would have no further comment on the matter.

Read the original story at PressHerald.com.