On July 19, the Portland City Council unanimously voted to pass a proposal to charge people about $1.05 per hour at city-owned electric vehicle charging stations. 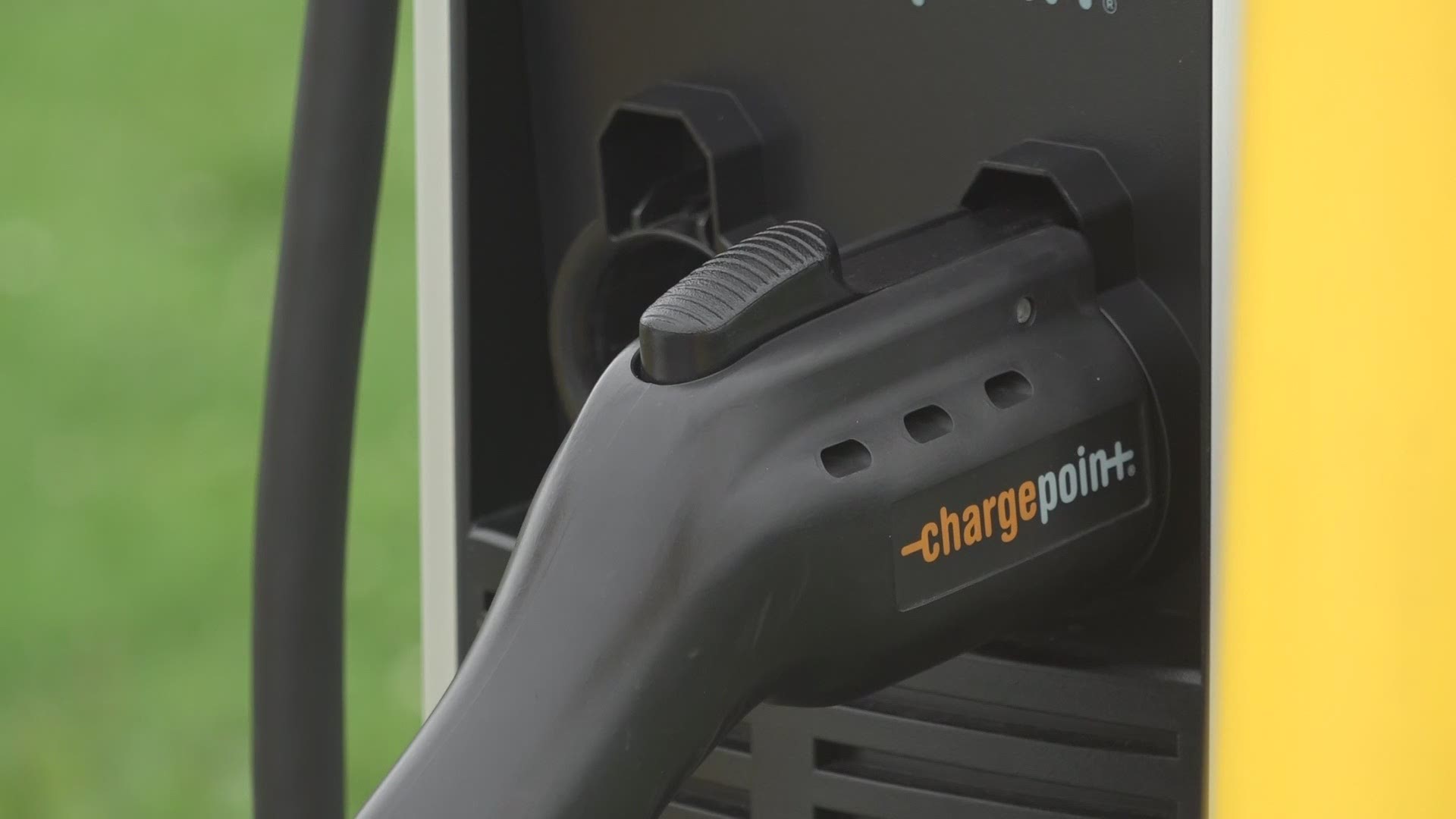 PORTLAND, Maine — The city of Portland will soon implement a fee for people to charge their electric vehicles at the city-operated charging stations, following a city council vote Monday night.

On July 19, the Portland City Council voted unanimously to pass a proposal that will establish fees at the seven network chargers the city operates in places like Payson Park, City Hall, the Portland International Jetport, and the Elm Street and Spring Street parking garages. These chargers were installed last fall and have been free for use until now.

Troy Moon, the sustainability coordinator for Portland, says people who charge their cars at these stations will have to pay 15 cents per kilowatt hour, which comes out to about $1.05 per hour. If people go over their allocated time -- determined either by whether their vehicle is finished charging, or if the charging station has a time limit -- they will be given a 10-minute grace period with notifications via an app. After that, they will be charged 25 cents per minute.

Last night, the Portland City Council voted unanimously to begin charging people to use the seven city-operated electric vehicle charging stations. There’s also a push to install more chargers in the city. Details on @newscentermaine at 6 and 6:30 a.m. #wakeMEup pic.twitter.com/iC9TBDnPvv

Moon says the goal of these fees is to help cover the costs of this program to make sure it can continue to run and expand, as well as to encourage more turnover at charging stations. The number of people using these chargers has grown every month, according to Moon, with about 265 uses in June.

"Just going by the City Hall one here -- there's a car plugged into it pretty much all the time. Even in Payson Park, which is not in the middle of the downtown, there's almost always cars plugged into that one, too," Moon expressed. "One of our real goals is to make sure that people who don't have access to a driveway are able to charge vehicles."

The chargers each cost the city between $30,000 and $40,000 to install, with ongoing network fees of about $1,500 every year. Moon says those costs have been covered by the electricity budget up until now, but these new fees will help alleviate some of that pressure.

RELATED: Maine requires so-called PFAS to be phased out by 2030

There's also a push for the city to install more chargers. A request for proposals is open now through the end of July, as the city works to establish a public-private partnership to take on this project. Portland's joint climate action plan with the city of South Portland addresses climate change from a few different avenues, including transportation. The cities' goal is to reduce carbon emissions by 80 percent by 2050.

"We expect that by 2050, we could see two feet of sea level rise, which would have huge consequences for our waterfront," Moon said. "Everything we can do to keep the carbon emissions down to prevent the worst outcomes are really important. We really want to encourage everyone to do their part here and support clean energy and drive EVs."

RELATED: Climate change and ticks: Are they linked?

Moon says the goal is to establish between 20 and 30 more publicly-owned chargers within the next few years. The city operates mostly level two chargers now, which add about 25 to 30 miles of battery power per hour charged. Moon says hopefully a couple of the new chargers will be high-speed ones. The goal is to encourage more people to switch over to electric vehicles. Moon says by 2050, he would like to see all new cars for sale be electric vehicles.

The number of new chargers the city will actually be able to add will be based on future funding made available. Fees will begin in about 30 days.