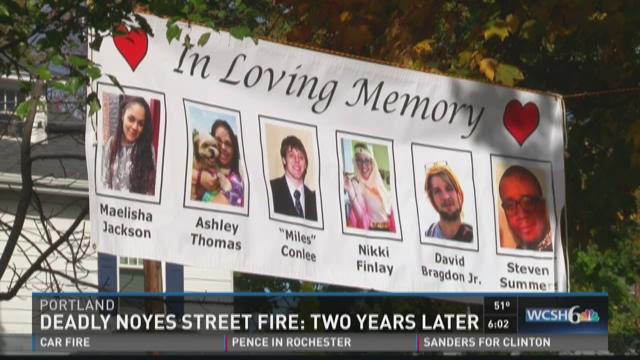 PORTLAND, Maine (NEWS CENTER) — Gregory Nisbet, the landlord of the Noyes Street apartment where six people died in a fire in 2014, was acquitted of manslaughter charges just over a week ago.

This coming Tuesday will mark the two-year anniversary of that fire in Portland, one of the deadliest in the city's history.

Each year, family and friends of the victims gather near where that building stood to remember their loved ones.

She reflected on the challenging week in court, after hearing details of the 2014 fire during landlord Gregory Nisbet's trial.

“At the end of the day, it's not going to bring Steve or any of them back,” she said.

Her husband Steven jumped out of that burning building on Nov. 1, 2014, and died from his burns three days later.

Ashley said Nisbet’s verdict doesn't change her emotions, but she sees room for improvement, saying that changes “need to be made in some of those gray areas of the law.”

She also sees how some good could come of this horrible tragedy, saying that, “if this fire has been something that has made landlords look at how they deal with their properties, then that will be a lot better.”

Ashley has a part of Steven with her every day, in their two young girls. With the trial over, she is now focused on how to teach them about their dad.

“Everything has always been about celebrating daddy,” she said. “He's just a larger than life kind of person. He really wouldn't want everybody sitting there crying.”

With Nisbet's trial behind them, Ashley said she and her girls are ready to start healing.