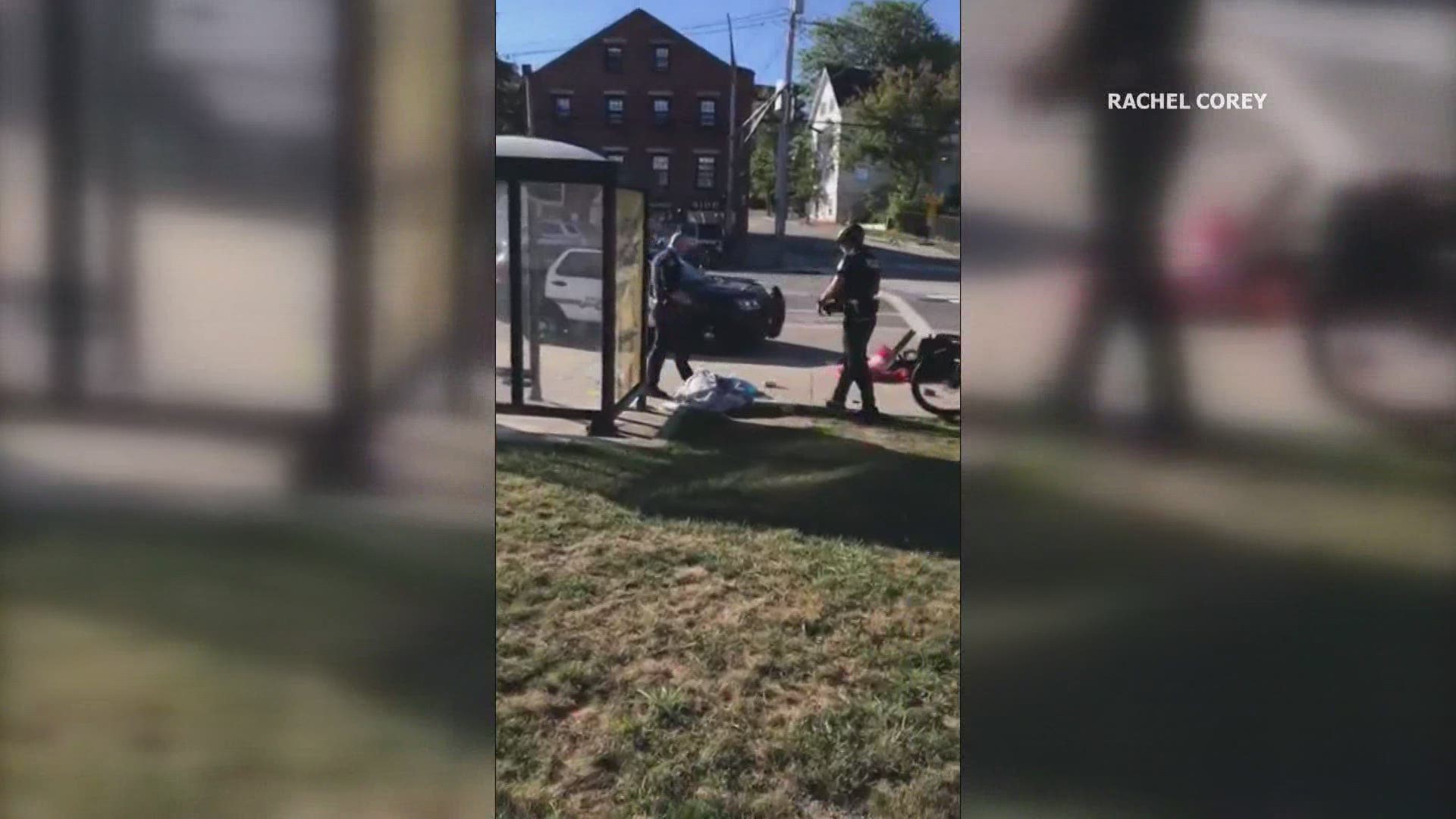 PORTLAND, Maine — A video taken by a Portland bystander has circulated on social media, causing a stir in the community and prompting police to come out in defense of its actions.

The video, which was posted on Twitter by the woman who recorded it, shows Portland police officers clearing what police later went on to describe as “debris” from a bus stop near the Post Office.

The person recording the video describes the so-called debris as being personal belongings of some unhoused Portland residents in the area, given the proximity to Deering Oaks Park where Portlanders experiencing homelessness have been gathering in recent months.

The video has flooded the Police Department with comments and messages, prompting the Department to explain their actions.

Also they don’t seem to know the city well b/c this cop referred to the main post office as city hall, and I had to dispel that misinformation.

According to police, a property manager in the area of Portland Street and Forest Avenue requested special attention to their property, reporting needles and trash being left on the property. Police responded to the area to help the Department of Public Works and Department of Parks and Recreation clean the debris from the sidewalk and surrounding area.

Police say in addition to the special attention request, a large number of requests were made through the SeeClickFix program to remove the trash that had accumulated in the area.

“The items that are seen on the ground in front of the bus stop were abandoned property, soiled and littered with needles, among other hazardous materials,” police wrote in the post.

“The property included soiled blankets, rotten food items, towels, cardboard, and beer cans. The property had accumulated over the past few days and no one within close proximity to the items claimed ownership or affiliation during that time. There were no identifiers within the property that would indicate who it belonged to and it was determined to be abandoned.”

An officer in the video cleared the abandoned property with his foot, kicking it across the sidewalk to the curb. In the video, the woman recording says, “So the cops are just destroying people’s property right now.”

Police say the officer was moving the property with his foot “for his own safety in order to avoid being stuck by a needle.”

“The abandoned property can be seen strewn along the sidewalk from the corner of Portland St. and Forest Av., past the bus stop. This poses a public health risk to people who utilize the post-office, sidewalk, and the bus stop,” police said.

The incident comes amid eviction worries and a housing crisis in Portland, which has been intensified due to the coronavirus pandemic and record unemployment numbers in the state. The Maine People’s Housing Coalition last month held a weeks-long camp-out demonstration at Portland City Hall to raise awareness of homelessness and the housing crisis.

The protest wound down after more than two weeks, with organizers saying they felt their message has been heard.

"People need a chance to do something to get their confidence back and get their pride back," a protest organizer said. "I think they've started here, I think we all got what we were looking for here, and I didn't know if it was gonna be a week or two or a month. It didn't matter. It was the point that we have a problem and we need to solve it.”

The City has said it hopes to continue collaborations to help the homeless in Portland access the housing and services they need.

“The Portland Police Department will continue to work with other city resources to preserve a safe and healthy environment in Deering Oaks and the surrounding Bayside area for residents and visitors to enjoy,” police said in their post on Saturday. “We recognize the challenges being faced by our unhoused community and will continue to collaborate with social service partners to support their health and safety as well.”