Townspeople and fishermen in Port Clyde are trying to block a plan to bring a big underwater cable into the village. The University of Maine is proposing to run the cable from two floating offshore wind turbines it intends to build near Monhegan Island, for the Maine Aqua Ventus project. 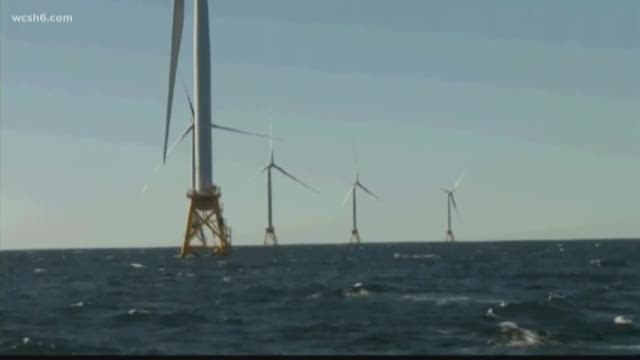 PORT CLYDE, Maine (NEWS CENTER) — Townspeople and fishermen in Port Clyde are trying to block a plan to bring a big underwater cable into the village. The University of Maine is proposing to run the cable from two floating offshore wind turbines it intends to build near Monhegan Island, for the Maine Aqua Ventus project.

The project is a partnership between UMaine, Cianbro and several others, with the goal of proving a new design for floating offshore wind turbines. A small-scale model of the floating platform and turbine was tested in the ocean off Castine for more than a year and a half. Now Aqua Ventus intends to build two full size floating turbines on a state-designated site off Monhegan Island. They need to bring that power to shore to feed into the electric grid, and have chosen Port Clyde for the cable landing.

But opponents say they believe the cable and related equipment—including some kind of transformer station and new, taller poles—would be too big for their small village. Fishermen also say the underwater cable would interfere with important fishing areas.

Jeff Thaler, the attorney for Maine Aqua Ventus, said they’re proposing to run the cable from Monhegan in an area already designated on marine charts for underwater cables, and believe it should not be a major problem for fishermen.

“We’re making great efforts to have as little impact as possible. We do not see there being anywhere close to the impacts being described by some people in Port Clyde,” said Thaler.

The opponents have formed a group called PORT, and on Tuesday submitted petitions to the town of St. George. The petition asks selectmen to prevent Aqua Ventus from using town land to bring to cable ashore and also asks for regulations to be developed to control any cable using private property.

Fishermen, meanwhile, say their bigger concern is what happens in the future. Maine Aqua Ventus has said it that once the new technology proves successful, businesses will use it to build large floating wind farms twenty miles offshore, where ocean wind is dependable. They say that would provide large amounts of clean power for Maine and create lots of new jobs. Fishermen say large wind farms would take up miles of ocean, and make those areas off limits for fishing.

None of this will happen anytime soon. Attorney Thaler said the Maine Aqua Ventus project still needs to go through state and federal permitting, and that any construction is still several years away.

Opponents are hoping St. George selectmen will respond to the petition in the next few weeks.