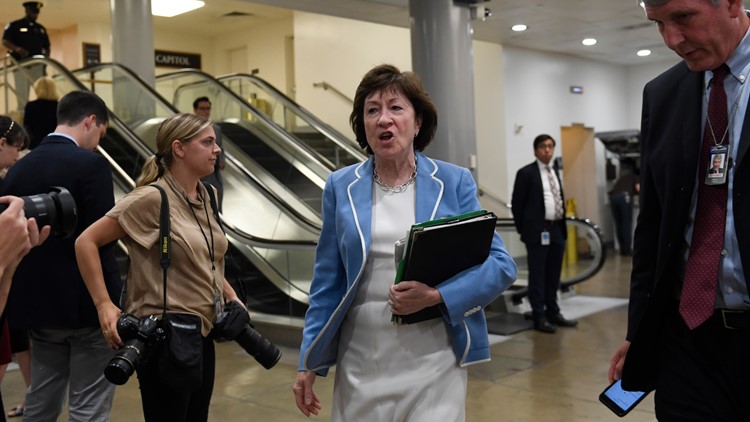 Outside money flows into race for Susan Collins' Senate seat

PORTLAND, Maine — Democrats vowed last year to make Republican Sen. Susan Collins pay for her vote confirming Brett Kavanaugh to the Supreme Court. Republicans declared they would have her back. Neither has forgotten its promises.

Money is pouring into Maine's high-profile Senate race, threatening to upend the state's reputation for genteel politics and giving way to a new era of partisanship.

Observers predict the race will set a spending record in the state, with tens of millions of dollars going into the state, even though Collins has yet to officially announce that she's seeking reelection.

Advertising data shows Democrats plan to spend at least $1.2 million on ads through December, including a spot that aired for the first time this month that accuses Collins of failing to protect Medicare. A newly formed GOP group, meanwhile, has $800,000 already in the bank, thanks to a small group of wealthy financiers. They've highlighted Collins' bipartisan credentials while calling her a "strong voice to the concerns of women across Maine and the nation."

The spending underscores how loud, polarized politics are changing campaigns far from battleground states and threatening the political culture that allowed centrists like Collins to thrive.

But it's unclear how Maine voters will respond to refighting her contentious vote for Kavanaugh or to the flood of outside money.

RELATED: 'I acted with integrity' -- Collins stands behind Kavanaugh vote following book release
RELATED: 'I will not be intimidated.' Senator Susan Collins says she made the right decision on Kavanaugh

The race represents one of a handful of opportunities for Democrats to pick up seats in the Senate in the pursuit of seizing control of the chamber from the GOP.

Collins, who was first elected in 1996, has practiced a measured, moderate brand of politics that aligned with the ethos of a state where most voters don't identify with either party. But the political climate in the state has recently developed more bite, as evidenced by former GOP Gov. Paul LePage's bare-knuckle style. New England Republicans, meanwhile, have become an endangered species in Congress, with Collins the last one.

The Kavanaugh controversy presented an opening for Democrats. The senator lost standing with many women when she voted for Kavanaugh after questions swirled about whether he would uphold Roe v. Wade and after Christine Blasey Ford came forward to say he had sexually assaulted her decades ago, when both were teens. Kavanaugh vigorously denied assaulting her.

Critics sent coat hangers to Collins' office, and an envelope containing white powder was sent to her home in Maine, both signs of how ugly the situation had become.

Roger Katz, a moderate Republican, attorney and former state senator in Augusta, acknowledged that vote hurt Collins. But he brushed off pundits' suggestions that she's become vulnerable. "Most people will look at her body of work over 24 years, not just a single issue," he said.

Gideon, who quickly received the backing of the national Democratic Senatorial Campaign Committee, touted her homegrown fundraising success. But both parties are expected to draw from outside Maine, the poorest state in New England.

The most expensive race in the state's history was last year's 2nd District congressional race, in which total spending topped $20 million. In the Senate race alone, spending could reach $60 million, said David Farmer, a Democratic operative in the state.

The last time Collins was on the ballot, in 2014, she spent a comparatively paltry $5.2 million and coasted to reelection with over 68% of the vote.

Democratic activists incensed by the Kavanaugh vote already raised $4 million for whoever becomes the Democratic nominee, an online effort that brought in money from across the U.S.

A new super PAC supporting Collins, meanwhile, showed how quickly money can be raised. In a snap, 1820 PAC, a reference to the year Maine gained statehood, raised nearly $800,000 from a small group of wealthy Republican donors. That includes $500,000 contributed by Stephen Schwarzman, the CEO of the Wall Street investment firm Blackstone and a Republican megadonor who has contributed millions to GOP causes, Federal Election Commission records show.

Maine Momentum, the group running the new anti-Collins ad, plans to spend at least $716,000 on ads geared toward the Senate race from now until the end of December, records show. Maine Momentum is a nonprofit "dark money" group that can raise unlimited sums and does not have to reveal its donors. And because it was recently founded, it won't have to report how much it raised until next year.

Maine Momentum spokesman Chris Glynn, Gideon's former communications director, said the group is focused on Collins' record on "health care, taxes and the money she has been taking from special interests in Washington."

But Collins' campaign said it's ironic that Democrats are embracing such tactics, noting how they have often lamented the loosened campaign finance rules that have led to a proliferation of dark money spending.

"This has more to do with (Democratic Senate leader) Chuck Schumer's political ambitions and absolutely nothing to do with doing what's right for the people of Maine and our country," said Kevin Kelley, her campaign spokeswoman.