Breaking News
More () »
Back To School

RSU 21 and 22 in Maine are offering hundreds of dollars in bonuses to get school bus driver open positions filled before school starts. 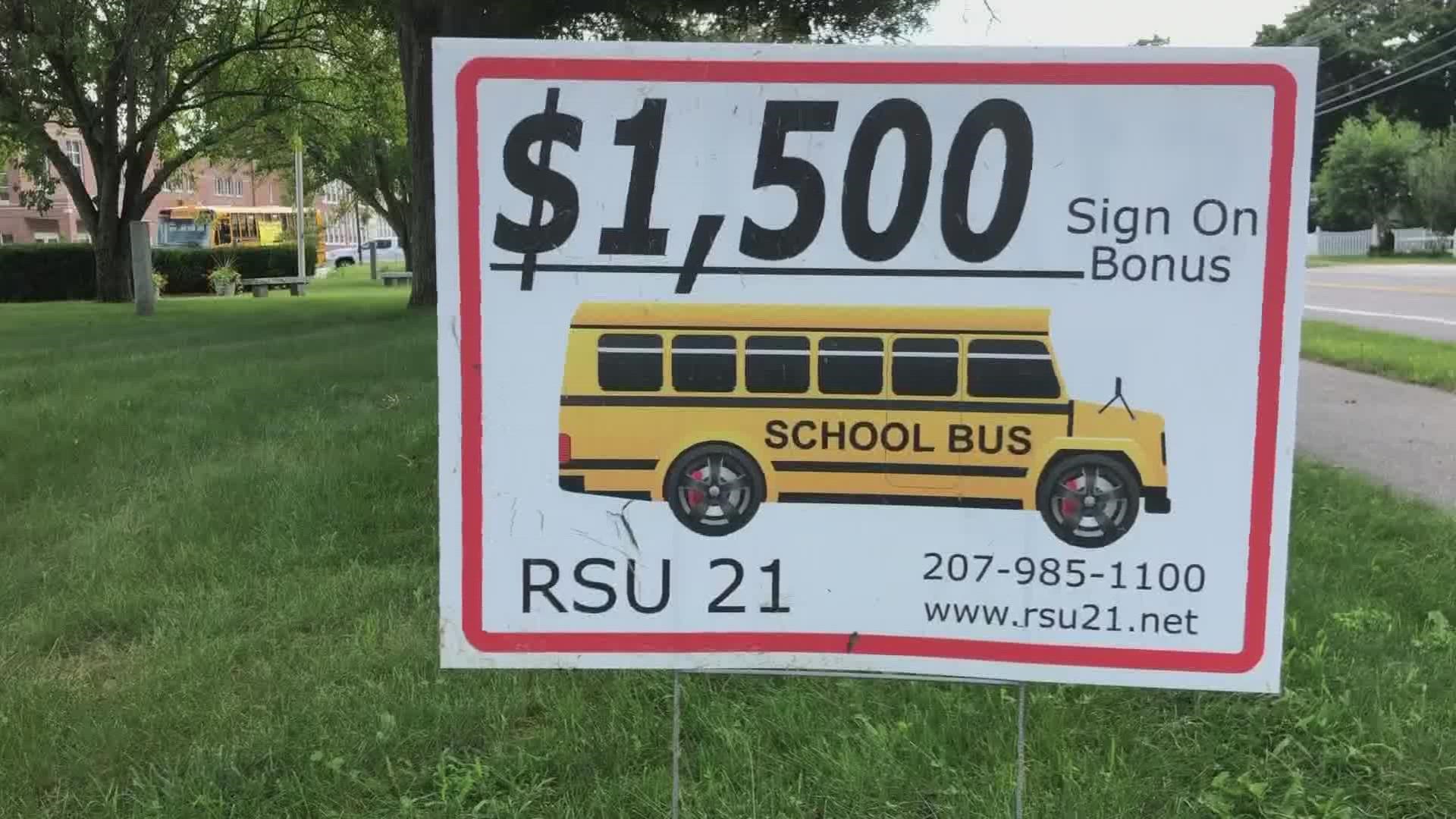 HAMPDEN, Maine — The start of the school year can be a stressful time. But when you add in the concerns about COVID-19, and now, new concerns over a nationwide bus driver shortage, it’s caused many school districts in Maine to pull out all the stops to fill open driver positions before the start of classes.

RSU 22, made up of Hampden, Newburgh, Winterport, and Frankfort, is offering new incentives this year that they haven't in the past. Drivers who can start right away are eligible for a $600 signing bonus, and those who still need to get their bus driver's license can get a $300 bonus when they sign.

Right now, RSU 22 has 21 bus drivers, according to the superintendent of schools, Regan Nickles.

"We have 3 to 4 jobs that are open," Nickles said. "Later on in September, we are expecting new drivers to join us and we'll continue to recruit."

Nickles adds that the demand for bus drivers was much less because of the number of students taking classes at home last year. This fall, the superintendent expects sporting events and in-person classes to make a full return.

"At times, we may have to shift timing on runs because if we have to double up that could cause people to either be picked up slightly later or dropped off slightly later, but for the most part, home to school will be prioritized so we’re getting all the students here on time, and then second to that, I think sports trips sports trips would be asked for flexibility and we have already started talking on how we can do that,” Nickles shares.

RSU 21, serving the towns of Kennebunk, Kennebunkport, and Arundel, is also offering a one-time sign-on bonus of $1,500 to new bus drivers.

The Brewer School District is making efforts to avoid a bus driver shortage as well. Dave Utterback is the Brewer High School athletic director. A statement he sent to NEWS CENTER Maine reads, in part, "I had 12 coaches request more information to be trained to drive a bus. Those names were passed along to our bus partner, Cyr Bus, who will oversee their training and licensure. The licensed coach will eventually be a part-time employee working for Cyr Bus."

Utterback said coaches were asked if they were interested in voluntarily signing up for bus driver training and getting their license.

An emergency meeting of the RSU 22 Board of Directors will be held Tuesday at 7 p.m. in the Hampden Academy Performing Arts Center to discuss the district's Back to School Plan. The meeting will be open to the public both in person or by video. Masks are currently required when indoors.

Anyone that wants to address the Board during the Public Comments section in person will sign up on-site at Hampden Academy. Those interested in commenting by Google Meet should notify the Superintendent’s office by email at bmoore@rsu22.us no later than Tuesday at 3 p.m.

RELATED: No, masks do not increase carbon dioxide levels for children