Paul Melanson pleaded not guilty in his initial court appearance on Wednesday, October 21. 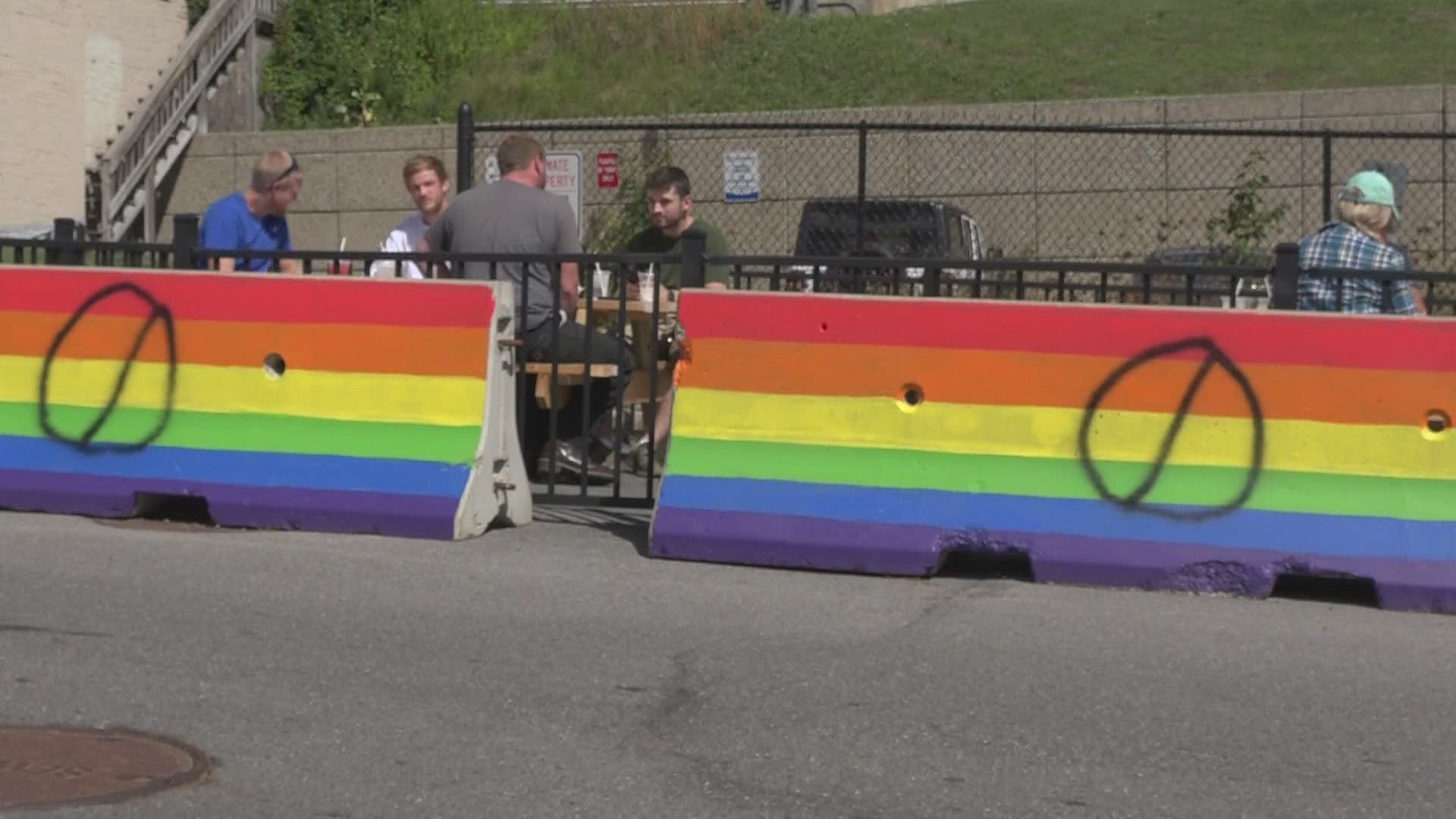 BANGOR, Maine — An Orono man is accused of defacing barriers that were painted in colors supporting the LGBTQ community.

Paul Melanson, 61, is charged with class D criminal mischief. The incident happened overnight Friday and was discovered by police around 8 a.m. on Saturday, September 5.

Melanson pleaded not guilty in his initial court appearance on Wednesday, October 21. He matter was continued until December 15 for a dispositional conference. The judge imposed a personal recognizance bail with a standard condition of not to commit new crimes.

Using surveillance video, detectives from the Bangor Police Department's Criminal Investigation Division discovered a full-size truck had been used in the commission of these crimes. Melanson was determined to be the owner of the truck and, after being interviewed by detectives, was charged.

The barriers belong to the City of Bangor, and were placed around outdoor seating areas for added safety. Earlier in the summer, many of the barricades were approved to be painted with rainbow and/or similar colors in support of the LGBTQ community, according to Bangor police.

As people woke up Saturday morning and drove or walked past downtown Bangor, you could see that the progressive flags surrounding restaurants, breweries, and stores in downtown Bangor had been vandalized overnight.

Sarah McCarthy was one of the volunteers that originally painted the progressive pride flag jersey barriers around downtown Bangor.

"Unfortunately we did anticipate vandalism, we were pleasantly surprised that we got two weeks without vandalism but we were prepared with extra paint that was donated by Edwards, Faust & Smith and Lowe's of Bangor, so we are back at it, just re-painting," McCarthy says.

McCarthy said, "We'd like for people to know that kindness trumps hate and a little graffiti on these progressive pride painted jersey barriers will not get in the way of that."

Aspen Ruhlin, a local member of the LGBTQ+ community in downtown Bangor, said, "This act of vandalism is also an act of violence, it was something that was both very heartbreaking and deeply upsetting but it was also something that was not particularly surprising to me."

Ruhlin tells NEWS CENTER Maine they feel there is an issue of homophobia, transphobia, general queerphobia in the Bangor community.

"While we have made a lot of progress since the murder of Charlie Howard, we have not made enough progress, I know myself and friends of mine part of the Q-plus community have noticed and experienced more homophobia in this community in this summer than any other time in our lives," Ruhlin says.

The spike of hatred they have noticed this summer is also with racism, not only with the LBGTQ+ community.

"Our community is not separate from experiencing that hate," Ruhlin says.

"Ally is not an identity, ally is an action," Ruhlin says. "Being an ally to any marginalized community whether we are talking about black, indigenous, people of color or the LGBTQ+ community is not just simply saying, 'oh I care about these people'...you need to take action!"

Volunteers from the downtown business partnership beautification committee will continue to re-paint all of the jersey barriers in downtown Bangor that were vandalized throughout the night.

"Knew that it had happened early in the morning, so we gathered all of the supplies back again about noon and started re-painting," McCarthy said.

Some business owners saw the vandalism and decided to instead spray paint red hearts on top of the graffiti.

"The overwhelming support for the LGBTQ+ community has been astounding," Scott Hall, who received the Bangor Pride Award earlier this year, said. "I'm really pleased with that but I think incidents like this graffiti, they show there is still an under currency of hatred going on there are still people who don't want transgender people or people of color welcomed downtown."

Hall says putting a pride flag up is great but there's a lot more that has to be done, a culture that the community has to work on.

RELATED: Downtown Bangor Partnership turns an ugly situation into something beautiful and prideful

RELATED: Tensions running high in Standish over a PRIDE sign put up in the small town