The Bangor nurses, used to caring for their patients, sprang into action to save a four-legged patient trapped between rocks in the Penobscot River. 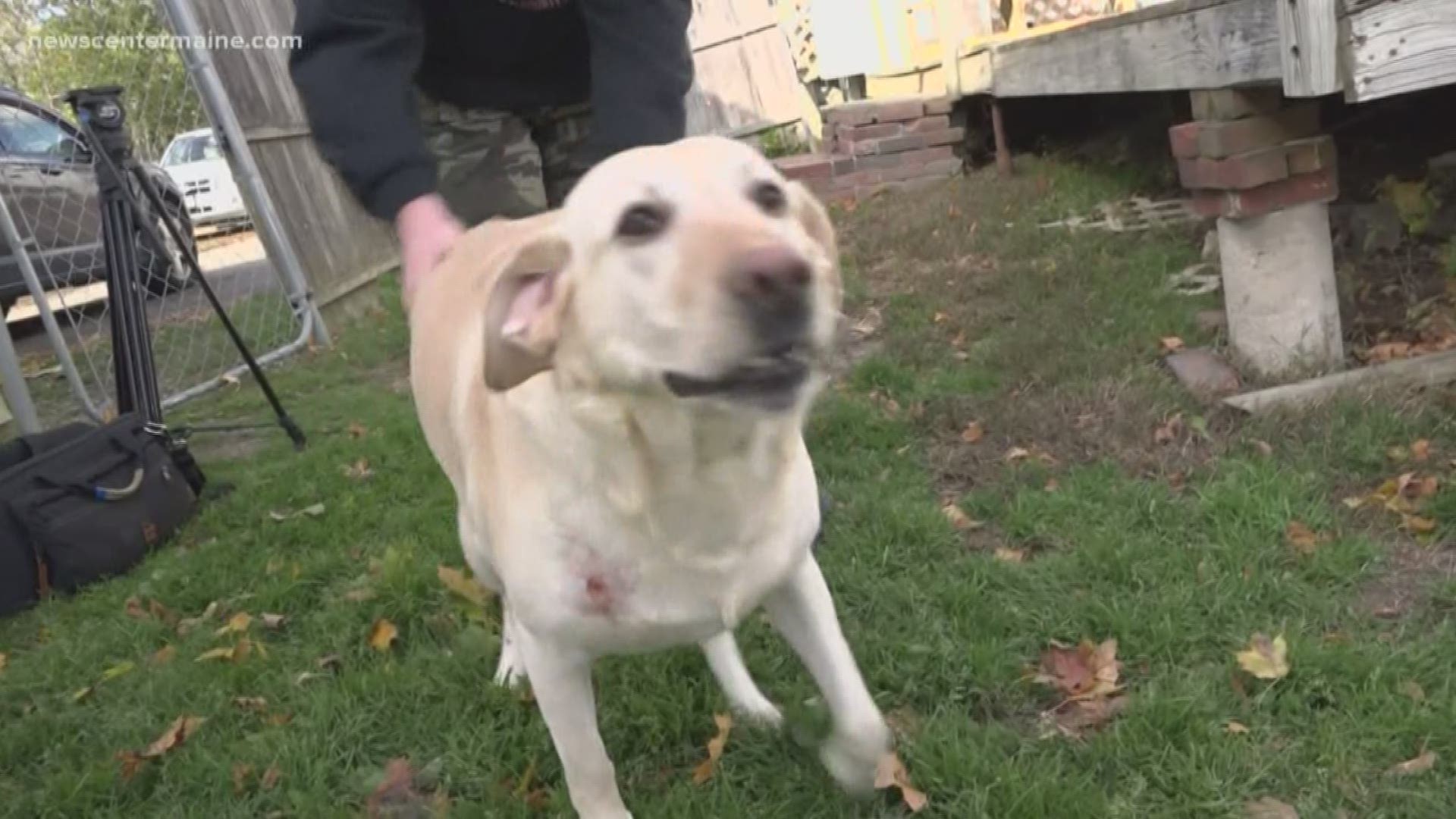 BANGOR, Maine — Nurses often work as a team when caring for their patients.

For a group of nurses at Northern Light Eastern Maine Medical Center, their teamwork was put to the test outside of the hospital's walls Friday when they rushed to stop someone from drowning in the Penobscot River.

It wasn't the "someone" these nurses are used to caring for, though.

This patient has four paws and a tail.

"We had no choice," said Kara Calor, a resident nurse at NLEMMC. "I wasn't going to watch a dog die in front of me."

One block away from the entrance to the hospital, Carrie and Jason Norris' dogs, Ladybug and Reilly, had escaped the couple's fenced-in backyard after that morning's windstorm made a hole in the fence.

"Which is why they got loose with no collars," said Carrie.

"I looked [down Hancock Street] but they weren't that way," said Jason. "As soon as I turned around up the road, I was able to see Reilly and Lady walking up Hancock Street together."

Ladybug came straight home when she heard her name being called but Reilly ventured further and further away.

"We saw her coming towards the house but then bolted away from us, we believe, because she was still looking for her sister," said Jason.

Credit: NCM
Reilly, the Norris couple's yellow Labrador, who was saved from drowning by a group of nurses in Bangor.

Reilly, the couple's yellow Labrador who loves barking, playing under the porch, and wrestling with her sister, Ladybug, made her way to the Penobscot River by the hospital.

A female patient looking out the window of her hospital room first spotted Reilly by the river and alerted the nurses.

Calor was the second person to spot the pooch.

She immediately sprang into action. 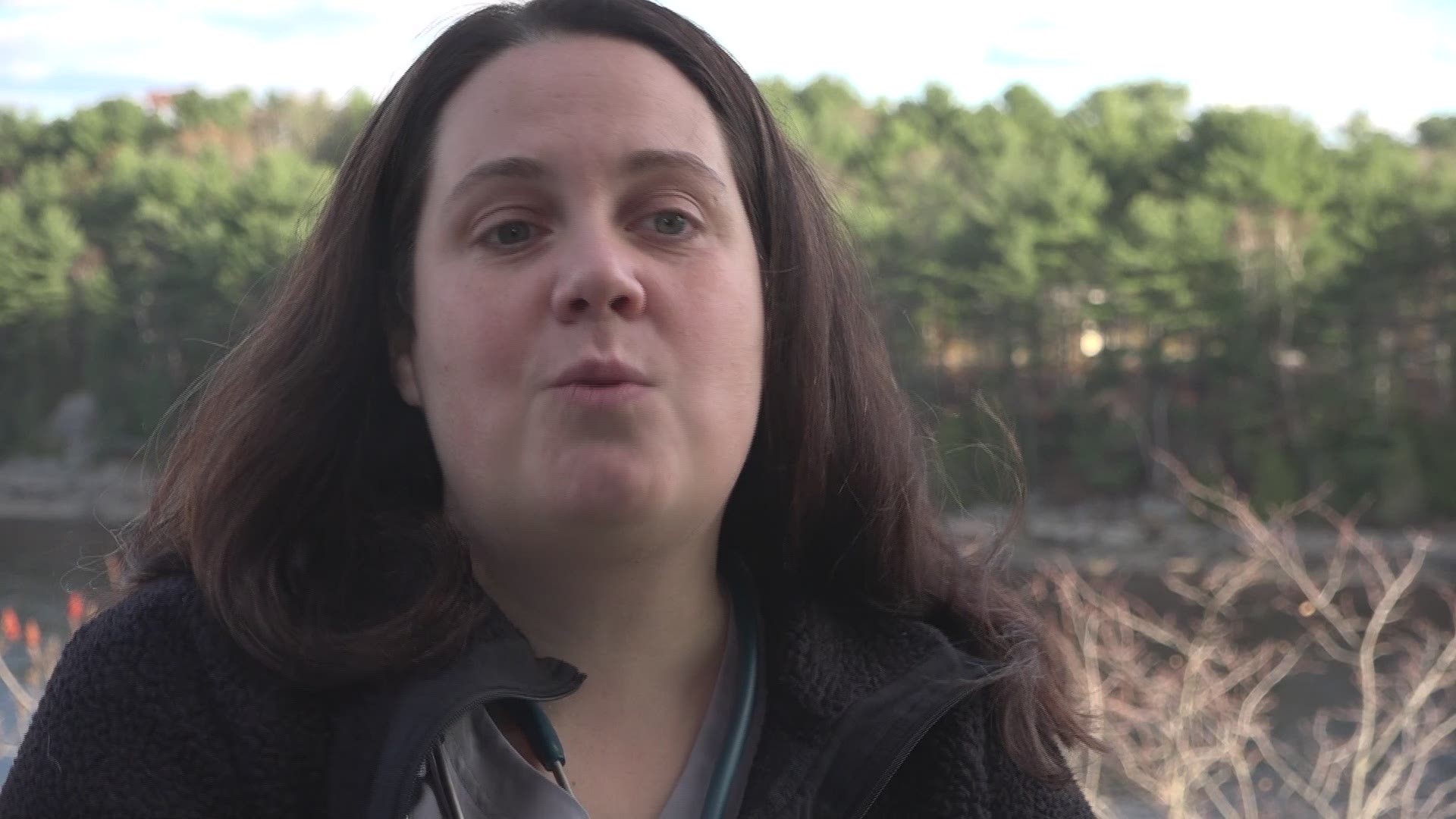 Calor and Shauna Young, both self-proclaimed dog-lovers, were two of the four nurses who ran to the river.

"We were all standing on the shore at that point watching this dog drown," said Calor. "Honestly we were all crying at that point, screaming, 'the dog's going to drown!' It was more panic at that point. We were all hysterical at that point just not really knowing what to do. It really didn't seem like an option and it wasn't like, 'oh, my shoes are going to get wet.' We had no choice."

"It took every single one of us," said Young, talking about how they got Reilly out of the water.

"It took all of us to do it," added Calor. "It definitely was not a one-man-show."

They worked as a team, like they do every day, to save another life.

"For somebody to jump into a freezing cold river to save an animal they've never seen before is just amazing," said Carrie. "If they hadn't acted as fast as they did, I wouldn't have her."

"Whether it's saving a dog or saving a person, this is what we do," said Calor.

"A life is a life and our first instinct is to help and spring into action so that's what we did," added Young.

Reilly's family couldn't be more grateful for this group of people, they call, their "heroes."

"I just can't even imagine not having her," said Carrie. "I really can't. There's not enough that I can do good to pay back what they did for us. I will never forget them."

After being rescued, Reilly was cared for by a local animal control officer and returned home.

She was seen by a veterinarian for injuries sustained while stuck between rocks in the river but is expected to make a full recovery.

"It's nerve-wracking," said Carrie. "I can't go through that again and I just can't see the pain in her eyes again."

The Norris' hope to get together with the nurses when Reilly feels better in a few days so they can see "what they saved."