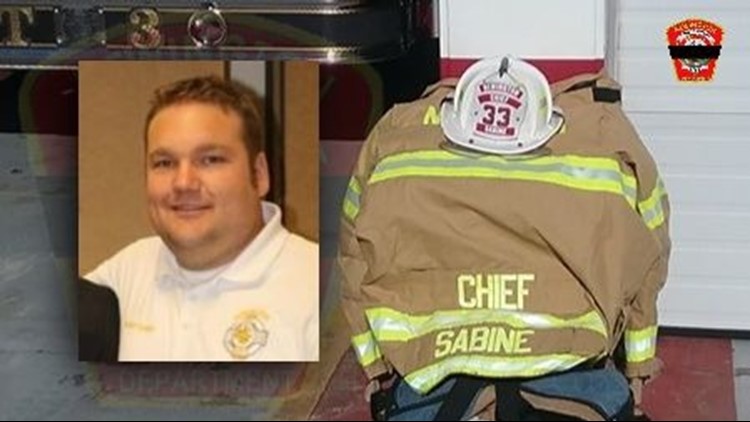 NEWINGTON, N.H. — Newington, New Hampshire, and its fire department are mourning the tragic passing of the town's fire chief, who was just 35 years old.

Raised in Newington, Chief Sabine first started serving for the department in 2002 as a junior firefighter, eventually attaining the role of chief last November.

According to his obituary, a young Sabine for many years rode his bike to the Newington fire station to buy something from the vending machine, hoping that one day the guys would let him in the fire house. "There was nothing more that [Sabine] loved as a young firefighter than to have the scanner on, going to calls, driving trucks and being with his brothers and sisters at the station," it reads.

"[Sabine]'s brain never turned off. Continuing to work through the very end, attending meeting and work responsibilities while hooked up to chemo and answering phone calls and emails from treatment at Dana-Farber in Boston."

The department said Sabine will be remembered for his love of firefighting and serving the community, along with being a "boisterous, caring and compassionate individual who managed others well." Additionally, the obituary details, Sabine was a loving husband, father and enjoyed to drive fast.

"Chief Sabine was an incredible leader, and an exceptionally kind individual, who saw this job as a way to help those in need," Acting Chief E.J. Hoyt said. "All of our thoughts and prayers are with his family at this very difficult time. We were fortunate to have him as a member of our department for many years, and he will be missed dearly."

Sabine is survived by his wife of seven years, Jennifer, and their two young children, Sophia, 5, and Maya, 3.

In the obituary, it includes one thing that Sabine apparently talked often about after his diagnosis: being your own advocate. "If something doesn't seem right, insist your doctors look in to it more," it reads. "Trust your body … be proactive."

Sabine's wake will be open to the public. It's scheduled to take place Thursday, Sept. 12, from 3-7 p.m. at Community Connect Church on Chase Drive in Portsmouth. A "sea of blue" line up is scheduled for 6 p.m.

His funeral is also open to the public, though only formal church members, family, friends and Newington FD personnel will proceed to the cemetery. It's set to begin at 11 a.m. on Friday, Sept. 13, at Community Connect Church.

Donations can be made at nutfieldfire.com (go to bottom, click donate)