AUGUSTA, Maine (NECN)-- A chilling 911 call and a forensic evaluation is shedding new light on a disturbing Halloween-day murder in Maine. 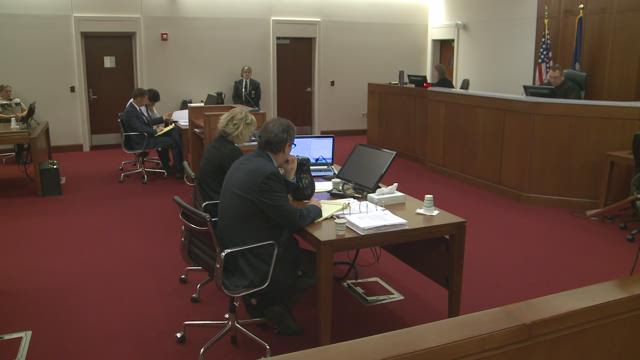 AUGUSTA, Maine (NECN)-- A chilling 911 call and a forensic evaluation is shedding new light on a disturbing Halloween-day murder in Maine.

Teenager Andrew Balcer is accused of killing his parents, Alice and Antonio Balcer inside their Winthrop, Maine home last year. At the time, he was just shy of his 18th birthday. A court hearing in Augusta this week will determine if Balcer will be tried as an adult.

Prosecutors played a disturbing 911 call that Balcer made moments after the murders. He tells a dispatcher that he stabbed his mother in the back, as she tried to give him a hug good night.

“She went to hug me and I just put my knife in her back,” Balcer can be heard saying. When the dispatcher asked him why he did it, he said he didn’t know – that he just snapped.

He went on to tell the dispatcher that his father heard his mother’s screams and tried to stop him.

“I stabbed the (expletive) out of him,” Balcer laughed.

The Maine Chief Medical Examiner testified that Alice Balcer had been stabbed nine times, and Antonio Balcer was stabbed 13 times. Police testified that Balcer peacefully surrendered to them after placing the 911 call, and did not appear upset about his parents’ deaths.

“He was just kind of smiling,” said Officer Tyler Nadeau. “He was kind of joking with me that his brother would need help [for what he witnessed].”

Prosecutors played a nearly three-hour-long taped confessional Balcer gave to detectives, in which he said he had no mental health struggles or issues with his parents.

But Dr. Debra Baeder, a forensic psychologist who evaluated Balcer, said he had been suffering from depression and “significant gender confusion.”

Dr. Baeder said Balcer had expressed his gender confusion to his mother in a round-about way, and that she did not seem receptive.

“I killed my parents because they forced me to be someone I wasn’t for so many years,” Dr. Baeder quoted from an interview she conducted with Balcer.

Defense attorney Walter McKee said the judge should consider Balcer’s age and mental condition when determining if he should be tried as an adult.

“People can sound like an adult and speak like an adult, but that doesn’t mean they’re an adult in terms of how they think, how they react, and how their brain develops,” he said.

The hearing will continue this week.