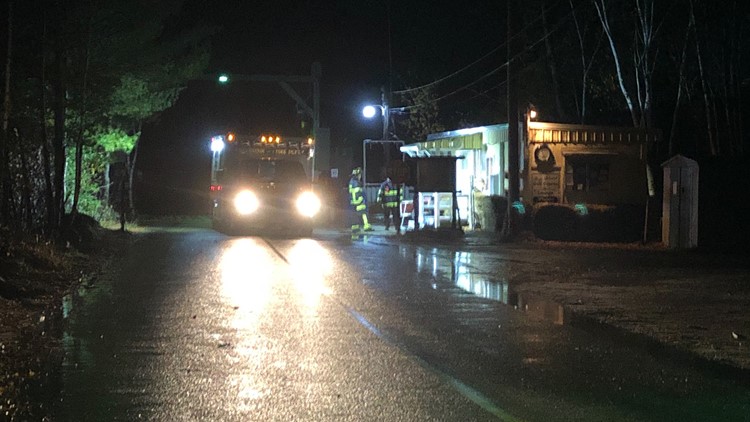 The county sheriff's office said Dennis Feeney of Westbrook was able to swim to safety but his two dogs did not make it. Sebago Lake's water temperature was likely in the upper 40s.
Author: Liam Nee
Published: 8:54 PM EST November 5, 2018
Updated: 4:07 AM EST November 6, 2018

Multiple crews including Cumberland County county sheriff's deputies and Bridgton police responded at about 8:15 p.m. to a report of the car driving off the end of one of the town's two ferries, in the process of loading vehicles to bring back to the mainland.

Patrol Capt. Scott Stewart said Dennis Feeney, 64, drove his white 2016 Mercedes onto the ferry but failed to put the car in park. It went forward and into the water.

Feeney and his two dogs were inside the car when it entered the water, Patrol Capt. Stewart said. Feeney was able to get out on his own and swim to the surface but his two dogs did not survive.

County dispatch initially said Feeney was not taken to the hospital, but a subsequent release from the sheriff's office said he was evaluated by Raymond Rescue and was taken to Mercy Hospital.

Stewart said efforts will be made Tuesday during the daylight hours to remove the car from the lake.

Sebago Lake's water temperature was likely in the upper 40s, according to reported measurements and analysis from NEWS CENTER Maine's meteorologists.

Frye Island's ferries operate daily, 15-minute round trips from May to November.

According to the town's 2018 ferry schedule, Monday, Nov. 5, was the season's final day of operation.

The ferries can typically transport up to nine passenger cars per trip, the town's website says. For safety reasons, it says, passengers are required to remain in their vehicles.