Historians hope a walking tour and renovations to Portland's Abyssinian Meeting House will bring greater understanding of Maine's role in this important chapter in our nation's history. 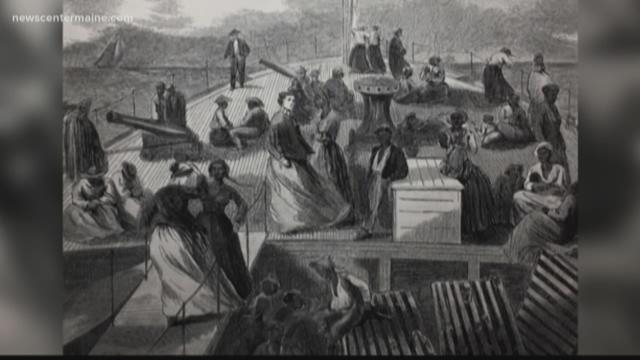 PORTLAND (NEWS CENTER Maine) — Historically, Maine played an important role in one of the most important movements for African Americans seeking freedom from slavery: the Underground Railroad.

From Portland to Brunswick-Topsham, to Brewer, to Fort Kent, sympathetic whites and freed blacks created some 75 "safe houses" along the route. They risked their own lives to provide a hiding place in homes or businesses for escaping slaves — many of whom were en route to freedom in Canada.

Many escaping slaves arrived by ship on Portland's waterfront and found their way to the Abyssinian Meeting House on Newbury Street, considered the cultural hub for African Americans in the area.

"A place like this is even more important because I want everybody to know my story – the African-American story – because even in this story, it's part of the bigger story which would have been slavery," said Pam Cummings. "It's all very important for everybody."

Cummings is president of the Abyssinian Meeting House Board, a group that is painstakingly renovating the historic building.

"All that went on in here and all that came from this building was able to thrive and be part of Maine's history," she said.

Cummings grew up in Portland, the daughter of an African-American mother and father, but she knew very little about the Abyssinian Meeting House. "I wasn't a stranger to the struggles. We just didn't know this building existed."

Built in 1828 by six free blacks, living in the Portland area, the Meeting House is three blocks from the working waterfront. It played a critical role as the cultural hub for African Americans: church services, meetings, entertainment and even a segregated public school all operated out of this meeting house.

It was there that runaway slaves found sympathetic support from both blacks and whites. It also served as a conduit in shielding runaway slaves from the Fugitive Slave Act.

"What it said was that you could come up here and you could find a runaway slave and bring it back to the South, and there's a bounty on that person," Cummings explained. "So, like everything else with the underground railroad, it had to be secretive."

It was so secretive that when fleeing blacks arrived by ship, there was no lingering down on the docks. Sympathetic whites — Quakers, Baptists, Shakers, Masons in the area — and free blacks jumped into action.

"They would meet the people at the dock and whisk them away. And change their appearance because, as I said, the bounty hunter has a description of what you look like and what you have on because they gave you everything that you own."

Cummings is working on creating an interactive educational center in the building's basement.

"We have some oral histories and I'm going to create an exhibit around the oral histories that we've captured. When I tell the story of the Abyssinian Meeting House, it is African-American history, it is our history," Cummings said, "but you should also be able to find your history in this history. Because it's a lot about the history of the human being: Our spirits, our willingness, the ability for our spirit to soar.

Renovations of the Abyssinian, the nation's third-oldest African-American meeting house, are well underway upstairs, too, where new wood meets old.

"This is the original, 18, it's an 1800s special," Leonard W. Cummings, Sr. explained, holding the weathered beam in his hands.

Leonard Cummings, the previous president of the Abyssinian Board, is also Pam Cummings’s father. For him, his love of the old meeting house is a family affair. He beams as he shows the walls inside, which have survived two fires and decades of neglect. He looks up, pointing to the posts and beams, cascading above. Piecing the meeting house together is clearly a labor of love. Each original piece of lumber bears roman numerals, which helps keep renovations authentic.

All over the state, in Brunswick, Topsham, Auburn up to Brewer, Orono, Eastport and Fort Kent, approximately 75 homes and churches have been identified as stops along the underground railroad. There are also clues — art, posters, newspaper clippings — to help determine the individuals and families who welcomed fleeing slaves into their safe houses; putting their own lives at risk in the name of freedom.

The end game was getting runaway slaves to Canada where they could indeed be free; there was no bounty hunting in Canada.

Later this summer, a new "living history" walking tour begins down on the Portland waterfront: A re-enactment of the very footsteps many slaves took, as they made their way, in disguise, up to the meeting house. The hope is it will bring greater understanding of the role Maine played in this important chapter in our nation's history.

As for the meeting house? It is undergoing extensive renovations, funded privately and through federal, state and local grants. It is a National Historic Registry site. The building will include an educational center on the ground floor and soaring ceilings with original wood on the top floor. Completion date is slated for 2020.