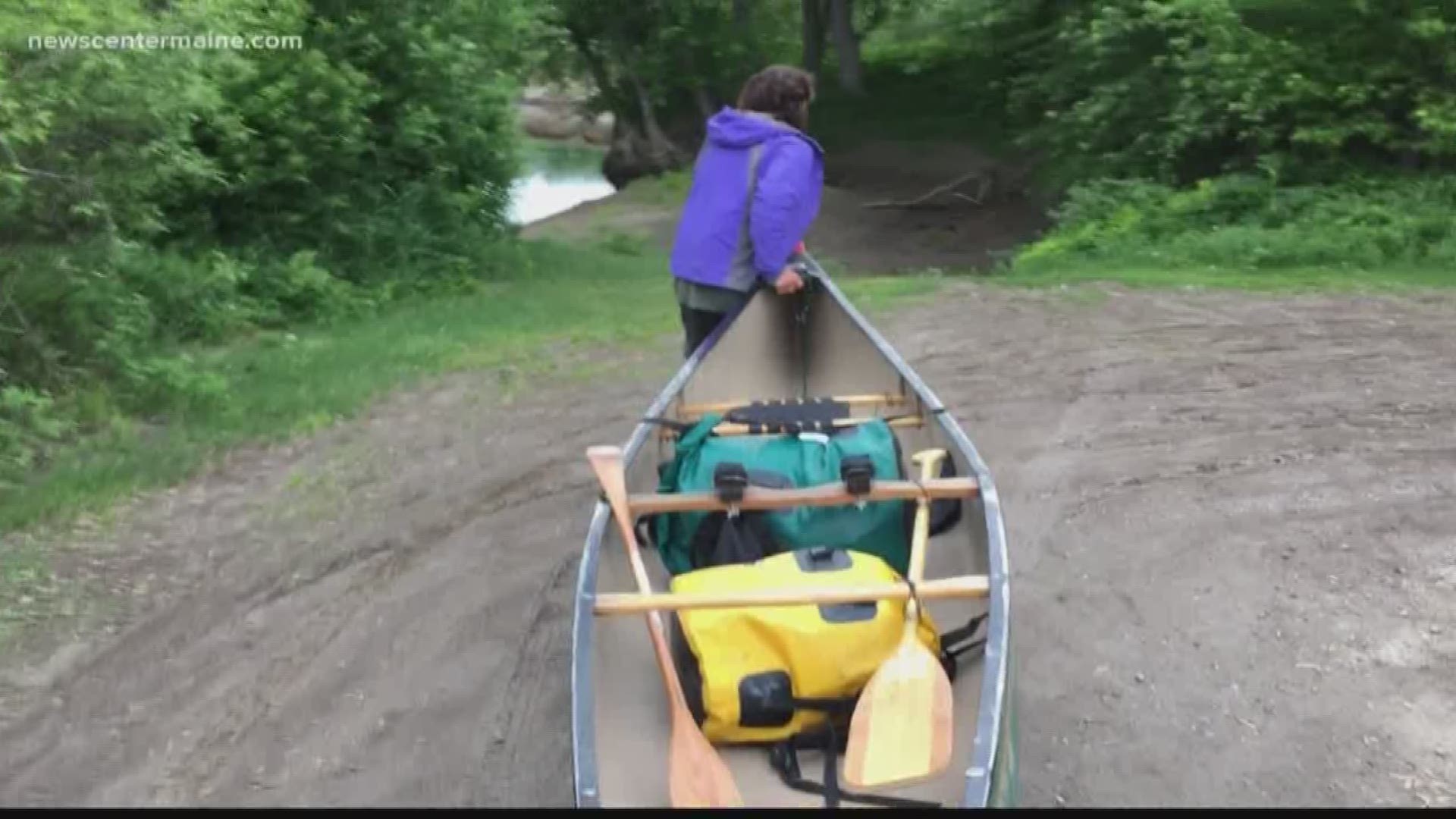 NEWS CENTER Maine told you last week about Jen Deraspe’s journey: to raise awareness about, and funding to clean up, Maine’s waterways. Deraspe is now a quarter of the way through the journey, which has been a cold, wet one. But, so far, so good.

► To donate to Water Quality Fundraiser

Jen Deraspe uses the word "humbling" a lot when she describes her 14-day trek down the Androscoggin, a trip she’s termed "One River~One Ocean."

"I’m very comfortable in the water," she said. "I grew up on the water, I love it. Any aspect of it, it doesn’t matter, I love water."

It’s that love of water that inspired Deraspe, who grew up in the town of Mexico, along the Androscoggin, to help clean it up.

It’s a trip for which she has been preparing for years. Deraspe said it spawned from her creation of Nurture Through Nature retreat center in Denmark.

"I started Nurture Through Nature as a guide, taking women on holistic canoe trips," she said. "It was magical to go out for a week; transformation happened."

► Learn more about Nurture Through Nature

Jen Deraspe is seeking another kind of transformation: She’s paddling the 164 miles of the Androscoggin to bring awareness to the critical importance of clean water.

"To me, if we clean up one river, we’ve cleaned up a hundred, a thousand," she said, "and we could be an example."

In Bethel, as in a handful of towns along the river’s route, Deraspe took time off the Androscoggin to talk to communities about her mission.

"People are despairing about what we’ve done to the earth and want to do something different," she said. "They really do, they’re just not sure what to do."

Deraspe spoke with a group of water enthusiasts at a picnic table at Davis Park where locals put in canoes and kayaks. Among them were Jessie Perkins of the Bethel Area Chamber of Commerce, Becky Secrest of the Androscoggin River Watershed Council and Brendan Schauffler of the Oxford County Wellness Collaborative.

"We realize we can’t talk about health and wellness without talking about how important jobs are and the economy and the health of the natural world," Schauffler said.

Perkins and Secrest, who have each paddled the Androscoggin, share Deraspe’s passion for improving the Androscoggin. In an animated conversation, they list off the birds and four-legged creatures they’ve seen along the river.

"I’ve seen eagles literally on every stretch of the river and ospreys all the way down, herons, moose, deer, everything," she said. "Bears. I never saw a bear. We saw a bear last summer."

Deraspe appears unfettered by the talk of bears. Each night, she sets up camp along the river. She said it’s a good way to get to know it better.

Though it’s been smooth going so far, Deraspe’s "beaver paddle" tells a different story. The polyurethaned gleam has faded from many spots, revealing rough, grayed wood beneath.

"You can tell where you’ve been holding on for dear life," she said. "Right up there, boy it’s worn."

Deraspe laughed easily at this, nodding her head.

She’s had to use her guide skills to navigate a series of rough rapids. She’ll need different skills further down river. She plans to speak with management at the Rumford Mill about cleaning up the mill’s waste.

"To better treat whatever their processes are so that whatever goes back into the river it’s more potable, has less chemical in it," she said.

A courageous message on a strenuous trip inspired by Maine Sen. Edmund Muskie, author of the Federal Clean Water Act of 1972, who grew up in Rumford, right next to Deraspe’s hometown of Mexico.

"Because of the state of the river, [Sen. Muskie] was inspired to do something and it just shows how one person can make a difference and he got it passed, in the federal government," she said. "It cleaned up all water across the country. One person. We can’t ever thank him enough for that."

Deraspe looks out onto the river she will be paddling until June 14 and smiles slightly. She knows the long, cold journey will make some sort of an impact. She believes one ripple could just lead to an ecological revolution of clean water everywhere.

She checks her gear, sets her paddles in place and leaves with this final thought: "I really think it’s time to do things differently. Better and more. We’re better and more."

Jen Deraspe’s 164-mile paddle finishes June 14 in Topsham next to Sea Dog Brewing Company, where there will be a celebration.

► Read the blog Jen Deraspe is writing along her journey