A man in North Yarmouth was caught on home surveillance video ripping signs off yard and several Trump signs were spray painted in South Portland in recent days. 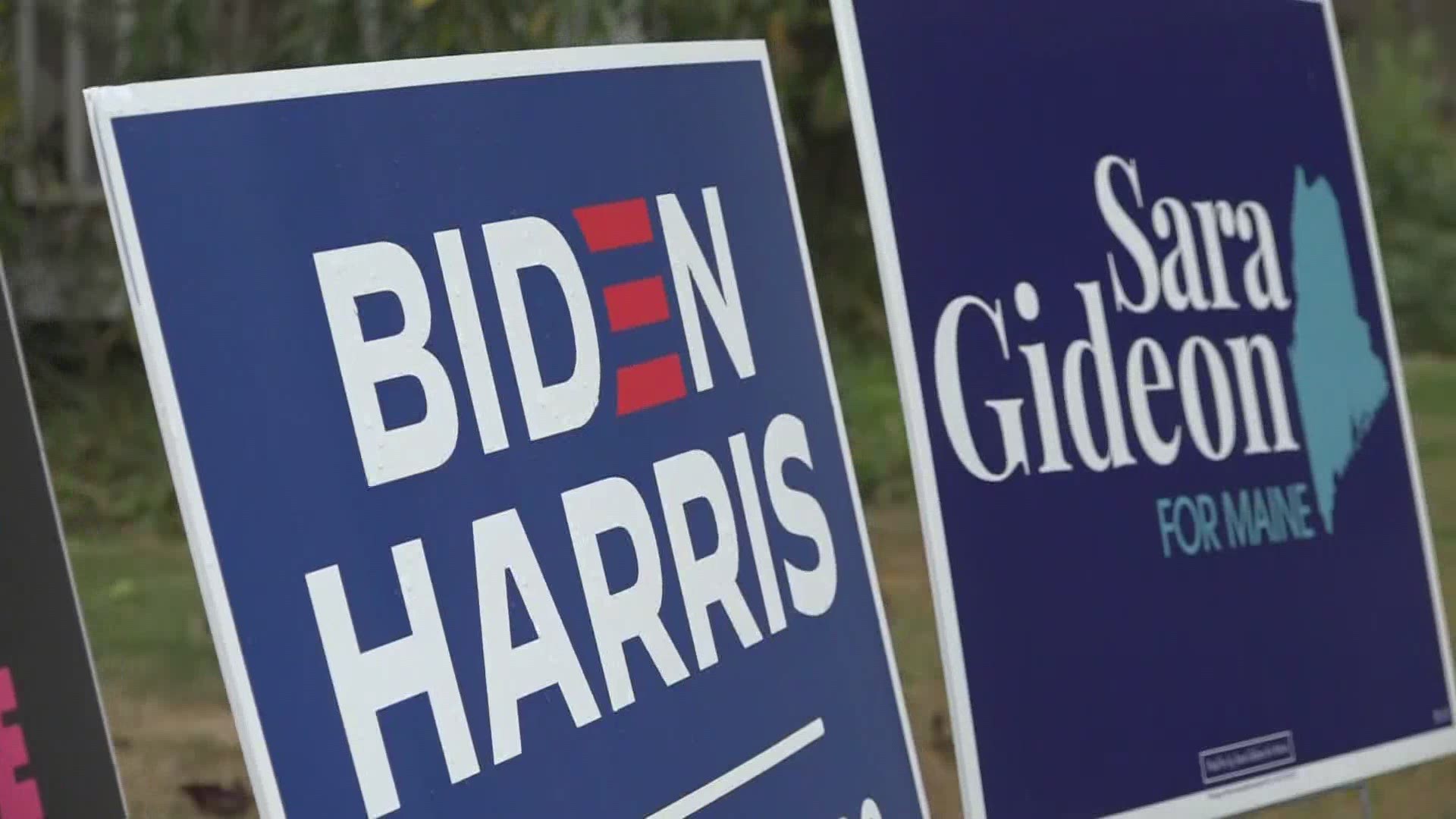 NORTH YARMOUTH, Maine — Communities across the state of Maine are seeing an uptick in vandalism and theft of political yard signs in the midst of one of the most contentious election cycles in our nation's history.

In North Yarmouth, a man was caught on home surveillance video ripping signs out of a yard on West Pownal Road.

"It was pretty obvious that someone came through and wiped out the entire road which made me pretty angry," Chris Lang said.

His house is one of several on the street with 'liberal-leaning' signs that was hit at least twice in the last month, according to Lang.

He has since installed a number of security cameras in front of his house and moved the signs on the other side of a fence to prevent it from happening.

"As much as people fight for the first amendment and free speech, this is our free speech. And encroaching on our rights and our space is not only stupid but it's un-American," Lang said.

RELATED: 'The rule of law matters,' says Maine GOP as it plans to crack down on lawn sign theft and destruction

This surveillance video from a home in North Yarmouth shows someone driving up in the middle of the night and ripping five signs from the front yard. The Cumberland County Sheriff's Office is now investigating. #NEWSCENTERmaine pic.twitter.com/E8jux7m3t5

Signs of candidates and causes of both political parties have been targeted.

Signs for President Trump were spray painted black near the Casco Bay Bridge in South Portland Monday. One sign says the word 'Nazi' over Trump's name.

"To be out there and destroying the property and the speech of people you disagree with is as un-American as it gets," Jason Savage, executive director of the Maine GOP told NEWS CENTER Maine.

The Maine GOP has vowed to take every reported case to local law enforcement agencies across the state to ensure vandals are held accountable.

Savage said he has taken evidence to police departments from Scarborough to Presque Isle.

"If it means prosecutions up and down the state to prove that this is not right then we're going to do that too," he said.

The Cumberland County Sheriff's Office has received a number of calls for theft and vandalism over the last couple of months, including the incident in North Yarmouth.

RELATED: Dunlap expects unprecedented absentee turnout as Maine is first to use RCV in a presidential election

Captain Kerry Joyce said it has picked up every more in the last month as we near the election.

"As we move forward I expect that the activity is going to continue, but we're going to increase of activity in terms of enforcement," Joyce said.

Lang said he is determined to have his voice heard and will continue to work to find the person responsible.

"If it happens again I'll put up five more signs, and again and again if I have to until they're either or caught or they just stop," he said.

Defacing or removing political signs in Maine is punishable by fines of up to $250.

Anyone with information on what happened in North Yarmouth is asked to contact the Cumberland County Sheriff's Office.